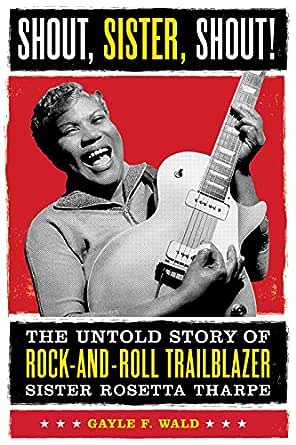 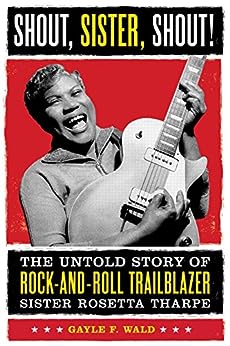 Most people today probably have never heard of Rosetta Tharpe or even seen pictures of her during her heyday at the Cotton Club, the Apollo Theater, Carnegie Hall, and even the Grand Ole Opry, spectacularly picking an electric guitar while decked out in a spangled evening dress. Ward's illuminating biography brings the deliciously flamboyant singer to life as gospel's first superstar and a seminal figure defying musical categorization. Tharpe influenced such stars as Johnny Cash, Jerry Lee Lewis, Etta James, Little Richard, Bonnie Raitt, Ruth Brown, and Isaac Hayes by incorporating blues, jazz, country, R & B, and pop ballads into a fundamentally gospel style, and without her precedent, Wald asserts, there would have been no Elvis (Wald suggests that Tharpe's 1945 crossover hit, "Strange Things Happening Every Day," may be the first rock 'n' roll record). What truly sets her apart is her extraordinary guitar playing. Now buried in an unmarked grave in Philadelphia, Tharpe was a larger-than-life figure in American pop music. May Wald's shimmering book revive her for new listeners. June Sawyers
Copyright © American Library Association. All rights reserved --This text refers to an out of print or unavailable edition of this title.

Gayle F. Wald is a professor at George Washington University and the author of Crossing the Line. She wrote the liner notes for a critically acclaimed 2003 Rosetta Tharpe tribute album. Wald lives in Washington, D.C. --This text refers to an out of print or unavailable edition of this title.

Rosetta Tharpe was one of my first influences, one of the first people I heard sing. I'm glad Gayle Wald has done a book on her, because people need to know.--Isaac Hayes

"Shout, Sister, Shout is a revelation, an important document and fascinating story. Praise to Gayle Wald for digging deep into the roots of rock."--David Ritz, author, Divided Soul: The Life of Marvin Gaye

"Before Mahalia Jackson's name was known and before Edwin Hawkins was born, Sister Rosetta Tharpe was a gospel super star. Her unique style of singing, playing guitar and emoting was packaged by Little Richard and the Rolling Stones and led to Rock and Roll. Wald tells 'Sister's' story with understanding, passion and tremendous knowledge of the music and the people. Finally, 'Sister' can rest in peace!"--Horace Clarence Boyer, author of The Golden Age of Gospel --This text refers to an out of print or unavailable edition of this title.

Though Elvis, Ginger Baker, Keith Richards and Jerry Lee Lewis paid her tribute, Sister Rosetta Tharpe's vast contribution to American musical history has nearly faded away. With the publication of this entertaining and enlightening biography, Tharpe—who reputedly played her electric guitar "like a man," withstood failed marriages, racial and sexual discrimination plus economic hardships—should receive the recognition she deserves. George Washington University professor Wald (Crossing the Line) has knit together memories of 150 people familiar with Tharpe and her work. Wald's competent research provides readers with the larger historical framework within which Tharpe's contributions can be appreciated. Born in Arkansas in 1915, Rosetta Tharpe became a well-known child performer, honing her gospel guitar style in Pentecostal churches and tent revivals throughout the South. By the late 1930s Tharpe relocated to Chicago, made the life-altering choice of forsaking Pentecostal church performances and embarked on a secular career, eventually signing with Decca Records. During the 1950s Tharpe's career sagged due to changing musical tastes, but a well-timed European tour in 1957 reignited her career. Tharpe courageously cut across racial, musical and sexual boundaries, defying easy categorization, which may have contributed to her obscurity. Wald's biography of this unique performer will hopefully reawaken interest in her life and music. (Feb.)
Copyright © Reed Business Information, a division of Reed Elsevier Inc. All rights reserved. --This text refers to an out of print or unavailable edition of this title.
Read more