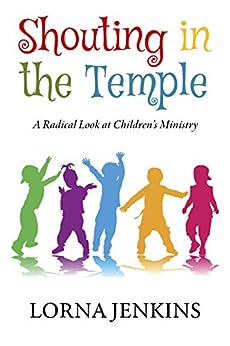 Shouting in the Temple: A Radical Look at Children's Ministry Kindle Edition

by Lorna Jenkins (Author) Format: Kindle Edition
See all formats and editions
Sorry, there was a problem loading this page. Try again.
Where do children belong? Often they have been excluded from church life and ministry. This book explains the biblical vision for children, which Lorna Jenkins received from God, and has implemented in various churches around the world. It integrates the children’s ministry through the church, the cell group, and the family. The book clarifies the heart issues for the church’s ministry to children and calls parents and church leaders to disciple and equip all the children for ministry.
Listen to what others are saying:
"Lorna Jenkins is the global expert in forming Intergenerational Cell Groups. I know this book will bless your ministry." -- Dr. Ralph Neighbour Jr., TOUCH Outreach Ministries, Houston, Texas
"This book is a fervent plea for the children of the Kingdom to be accepted as co-laborers with the adults." -- Rev. Lawrence Khong, Senior Pastor, Faith Community Baptist Church-Singapore
“Dr. Jenkins' ground-breaking book encourages us to return to God's original plan...A must-read for parents, pastors and children's workers.” -- Ann Hornshaw, Children's Pastor, Church of the Good Shepherd, Sydney
“Shouting in the Temple gives a prophetic voice that must be heard in this generation. No nation, church or individual can afford to ignore this message as we approach the return of Jesus.” -- Daphne Kirk, author and founder of www.gnation2gnation.com/
Read more
Previous page
Next page

"This book is a fervent plea for the children of the Kingdom to be accepted as co-laborers with the adults..." -- Rev. Lawrence Khong, Senior Pastor, Faith Community Baptist Church-Singapore

A fervent plea for children of the Kingdom to be accepted as co-laborers in the work of the ministry. -- Apostle Lawrence Khong,

No nation, church or individual can afford to ignore this message as we approach the return of Jesus. -- Daphne Kirk, Children's --This text refers to an out of print or unavailable edition of this title.

The Great King's Party The great King decided to give a party, a splendid party that would include everyone in his Kingdom. His messengers traveled far and wide, distributing invitations so that no one would be forgotten. The invitations clearly stated that on the day of the party, the King would be giving a gift to every person in the land.

People were bubbling with excitement. Everyone planned to be there, for no one wanted to miss the King's gift. What would it be? A piece of land? A gold coin? A precious stone?

The parents worried about their children. They did not want to miss the King's party, yet they were reluctant to bring them. Suppose they misbehaved and made the parents feel ashamed? If the children were present, Mom and Dad would spend their time cutting up food, cleaning up spills, and settling arguments. It would be far better if the children were not there. For this reason, they decided to give the children a party of their own to take place at the same time as the King's party.

On the day of the great event, everyone wore their finest clothes. The children were delivered to the children's party, while the adults waited for the King to arrive. Entering quietly, he saw that everyone was enjoying the feast, but there were no children.

"Where are the children?" he asked one of his servants.

"Oh sire, the parents have made a special party for the children by themselves. They are in the hall across the street, having a good time."

The King frowned and left as quietly as he had entered. He cross the street to the hall where the children were.

Were they excited to see him! They asked him to play with them, and he took time to talk with each of them and give each child a gift.

By this time, the adults were wondering where the King was. "How strange that he invited us to a party, and yet he is not here!"

At that moment, the doors opened and the King arrived, followed by a host of children. They were singing, and smiling, and waving their gifts.

"We cannot understand it," thought the parents. "Why would the King rather be with the children than with us?"

Then they began to wonder what the King had given their children--perhaps some candies or toys?

The King walked to the front and spoke to them. "My people, when I invited all my people to my party, I meant everyone, no matter how old or young. I have gifts for each of you, especially for those young enough to receive them."

When the parents looked at thier children's gifts, they were astonished. Some had received a gift of Wisdom; others, a gift of Prophecy. Some had been given a gift of Healing, some a gift of Prayer. Others had Encouragement; still others, Helping. The children were delighted. They thought it was only natural that the King would give them such gifts to use.

The parents were amazed. The children's gifts were exactly like theirs.

Through ageless centuries, God has had a dream. In his mind, his Kingdom has already come. His reign is established. Those who love him rejoice in his presence and serve him. Young and old, men and women, they encompass every race and rank. Among them is a host of riotous children, serving and obeying him with their whole hearts.

In our world, we cannot see God's dream. We are too hedged in by the pressures of the society we know. Yet every time we pray "Thy Kingdom come," we are affirming his dream. When will it become real on earth, as it is in heaven?

Our churches have become accustomed to children who are cheerful, noisy and mostly bored about God. We hope they will be different when they grow up; we don't expect much of them now. Our expectations for them are insignificant, compared to the dreams God has for them.

You cannot judge the success of the Children's ministry by the number of children present. You should look at the product of the Children's Ministry. You are successful if the children are becoming fully active and committed followers of Jesus.

Simply hoping is not an answer. Parents and leaders need to talk to those who have left the church of their childhood. Why did they leave? Did their childhood faith make any impression on their adult lives?

I spent 25 years trying to make the Sunday School system work. I trained diligently. I learned to draw and to use puppets...practiced story-telling...sat on committees...wrote lesson material...even trained others. In the end, I saw it was not working. For all the effort, creativity and dedication of the leaders, children were still walking away from the church, unconverted and uninterested.

That's what drove me back to the Bible to rediscover God's dream. He loves children. He doesn't bring them into the world with the idea that one day they will be lost.

Lorna Jenkins is an international children's speaker and consultant. She has been working with children throughout her ministry and has studied children in small groups during her doctoral studies. She has worked for some years with Dr. Ralph W. Neighbour Jr. in the U.S. and at Faith Community Baptist Church in Singapore. Born in New Zealand, she is a pastor's wife. She has three grown children and several grandchildren. She holds the degree of Doctor of Ministry from Columbia International University. She is the author of various books and children's resource materials. --This text refers to an out of print or unavailable edition of this title.
Read more

Chad Gillihan
5.0 out of 5 stars Wow !! A must read if you believe that children our the future !!
Reviewed in the United States 🇺🇸 on March 23, 2021
Verified Purchase
I found this book challenging and also convicting at the same time !! It explains how separating children from adults during church functions creates separation and loss of the complete life of faith because not all ages are present to worship together. How does a child know how adults act and learn if they are not included is a question that it raises !!
Read more
Helpful
Report abuse
See all reviews
Report an issue
Does this item contain inappropriate content?
Report
Do you believe that this item violates a copyright?
Report
Does this item contain quality or formatting issues?
Report