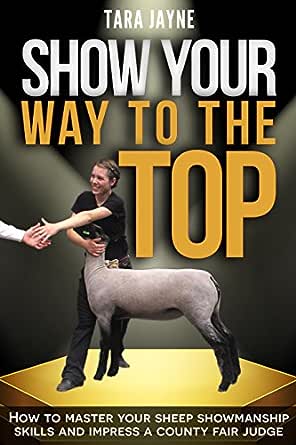 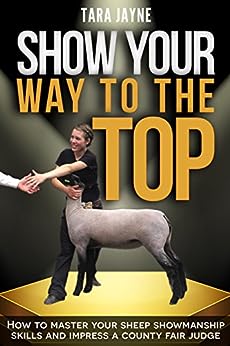 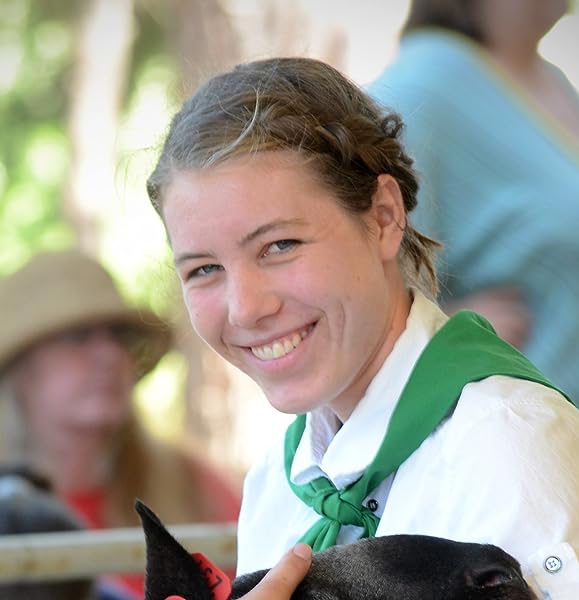 Show Your Way To The Top: How to Master Your Sheep Showmanship Skills and Impress a County Fair Judge Kindle Edition

"The first words that came to my mind after having read the book was 'well done'. I found the book easy to follow as well as how well it flowed from one chapter to the other." - Don L., FFA Advisor for 30 years

"Afterreading this book it is clear that the author knows her stuff!! I showed sheepfor about 8 years myself and I did not know half of the things contained inthis book." - Ken S., Kindle Purchaser

"Anyoneplanning to show should definitely own this invaluable book. Her directions areclear, and even someone with little to no experience should be able to followher well-defined steps." - Rebekah J., Kindle Purchaser

"As a breeder I wish all my showmen would read and follow the advise contained in this book." Karin F., Kindle Purchaser

It can be hard to win an award when you have four plus siblingsin the same class trying for the same thing!

Tara comes from a family of twelve children and they all learnedthe same things at about the same time. It was up to each of them to make themost of the knowledge they had. They all did 4-H, they all raised sheep, andthey all wanted to win.

Tara won senior sheep showmanship in 2010 beating her olderbrothers and the next year her little brother came in and beat her. Tara says,"It can be tough competing against your siblings, but it motivated us all towork harder"

Today she is a 4-H co-resource leader, swine project leader,poultry avian bowl coach; and she still trains and shows livestock. Tara lovesto teach, write, and work with youth. She was born in 1996 and wants tospend the rest of her life writing books and working with livestock.

4.9 out of 5 stars
4.9 out of 5
106 global ratings
How are ratings calculated?
To calculate the overall star rating and percentage breakdown by star, we don’t use a simple average. Instead, our system considers things like how recent a review is and if the reviewer bought the item on Amazon. It also analyzes reviews to verify trustworthiness.
Top reviews

SpiritWindmommy
5.0 out of 5 stars Simple and Powerful
Reviewed in the United States on December 10, 2015
Verified Purchase
This book is simple and yet powerful! This is a great teaching and training tool for competitors of all ages who are serious about competing. I appreciate that the writing is simplistic so that youth can read it and understand what they are reading as well as it can still be enjoyed by adults. Although the step by step ways to success is geared towards sheep showmanship, the wisdom shared is very applicable to any showman with any species. As a family that participates in open livestock shows, this book gave me some great ideas, suggestions and encouragement for my kids. The illustrations were very helpful and the authors humility was refreshing. A great book and strongly recommended!
Read more
5 people found this helpful
Helpful
Comment Report abuse

Cathy R. Payne
5.0 out of 5 stars A Real Winner!
Reviewed in the United States on December 10, 2015
Verified Purchase
Tara Jayne has a winner here in the "how to" genre to help children, adults, and 4H mentors learn how to show their sheep to bring home top awards every time. Tara took her own hard won experience in the ring and transferred that information into an easy to access method that others can use to recreate her success with much less trial and error. The photographs interspersed throughout this well organized volume will help the reader visualize exactly what you need to do to properly handle your sheep. She starts with Three Basic Steps to get you started and includes Bonus Tips for practice. She even covers how to answer questions from the judge and includes a glossary of terms to help the reader avoid confusion. Top honors and a blue ribbon to Tara Jayne for a real winning read!
Read more
One person found this helpful
Helpful
Comment Report abuse

Lisa Watson
5.0 out of 5 stars Thorough & Helpful Resource
Reviewed in the United States on December 13, 2015
Verified Purchase
Tara has done a very thorough job of explaining everything you need to know to take your sheep from wild to winning. She shares with you her experience and success, demonstrating a level of professionalism beyond her years. I was impressed at just how thorough this book is - Tara gives you techniques from the beginning of training all the way to impressing the judges. She not only gives you specific techniques and tips, but warns you of possible problems and tells you how to overcome them. There are even sample questions, extra tips, and a full glossary of show terms. This is an amazing resource for anyone who is going to show sheep or anyone who will be teaching others to show sheep. I have no doubt that if you follow all of Tara's tips as well as put in the hard work required, you'll be a winner in no time.
Read more
2 people found this helpful
Helpful
Comment Report abuse

Jake
5.0 out of 5 stars Great tips for showing sheep, and any animal! 4H and FFA read here.
Reviewed in the United States on December 11, 2015
Verified Purchase
What a great resource for any showman. As a 4H leader and educator with numerous students who show sheep and other animals, I found this book to be well organized, simply laid out, and very applicable. The step by step process that was followed in the organization of Show Your Way to the Top allowed for easy reading and great understanding of the important components of showing sheep and how to do well. Most interestingly, many of the principles written about in this book are easily transferable to other animals and how to best prepare for showing and how to show. This book is also a good read for showman of any age, whether young and inexperienced 4H or very experienced older 4H/FFA. This will be a great resource for any to take advantage of.
Read more
3 people found this helpful
Helpful
Comment Report abuse

ksmo
5.0 out of 5 stars A MUST READ for all showmen!
Reviewed in the United States on December 9, 2015
Verified Purchase
Attention 4-H leaders and FFA advisors -- your job just got a WHOLE LOT easier! This amazing "how to" for the basics of showmanship...and far beyond! Buy this book and put it into practice -- the hard work has been done for you. Loved this quote: "Sheep showmanship is not about getting good and staying there. It is about getting good enough to win, and then getting better."
Read more
4 people found this helpful
Helpful
Comment Report abuse

BethN
5.0 out of 5 stars Good training for bummer lambs
Reviewed in the United States on March 24, 2017
Verified Purchase
I am nine years old. One morning daddy woke me up and brought me upstairs and showed me two black lambs that had been abandoned by their mother. And I bottle fed them. Now they are outside in a field with an electric fence. I wanted to bring them to the fair, so daddy bought this book for me. I've begun their training and it seems helpful. I've read it two times through and I really liked the part about training them how to walk on the halter. They're walking on the halter a lot better now.
Read more
One person found this helpful
Helpful
Comment Report abuse

Rebekah Jackowitz
5.0 out of 5 stars Absolute Must-Have!
Reviewed in the United States on December 9, 2015
Verified Purchase
Tara Jane is a knowledgeable writer and her experience brings an authority to her words. Anyone planning to show should definitely own this invaluable book. Her directions are clear, and even someone with little to no experience should be able to follow her well-defined steps.
Read more
3 people found this helpful
Helpful
Comment Report abuse

Sean Sumner
5.0 out of 5 stars Great resource for any 4H or FFA family!
Reviewed in the United States on December 11, 2015
Verified Purchase
Wonderful resource for anyone showing an animal. I wish I had a resource like this when I was younger and involved in FFA. I have multiple family members that show in 4h and FFA and I will be giving them this book as a gift.

I can't believe the author is only 19! She obviously knows her stuff winning a total of 27 showmanship classes in her career. You can also tell how much she loves to teach others as it comes through in her writing

Overall a great book for any 4H or FFA family.

Allie
5.0 out of 5 stars Exactly what it says
Reviewed in the United Kingdom on June 15, 2019
Verified Purchase
Good book
Read more
Report abuse
See all reviews