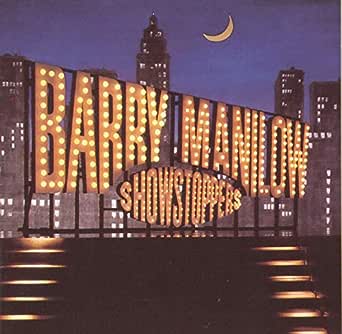 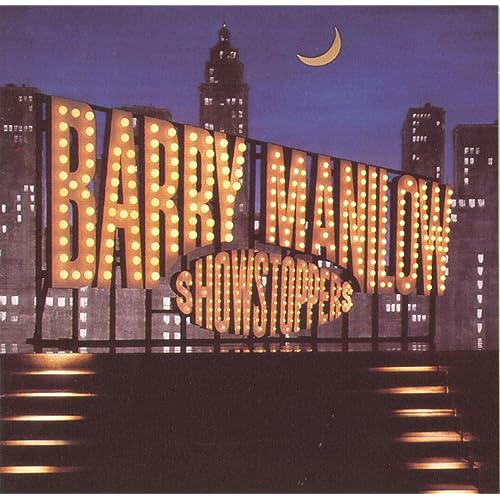 4.5 out of 5 stars
4.5 out of 5
46 customer ratings
How does Amazon calculate star ratings?
Amazon calculates a product’s star ratings based on a machine learned model instead of a raw data average. The model takes into account factors including the age of a rating, whether the ratings are from verified purchasers, and factors that establish reviewer trustworthiness.
Top reviews

Kathy W
VINE VOICE
5.0 out of 5 stars Barry on Broadway
Reviewed in the United States on September 1, 2006
Verified Purchase
What a great idea--Barry on Broadway. Who-da-thunk-it? This is another great album from the master of versatility. Obviously, a little different than a standard Manilow album, there are 18 tracks of Broadway musical tunes in all. All beautifully done and dated from 1904 "Give My Regards to Broadway" (Little Johnny Jones) to 1991 "But the World Goes Round" (And the World Goes Round). The 18 tracks were selected by Barry after researching hundreds of Broadway show songs.

"Where or When" by Richard Rogers and from Babes in Arms was always one of my favorites, as is "Dancing in the Dark." "Look to the Rainbow," from Finian's Rainbow is a beautiful duet between Barry and Barbara Cook.

The only song I didn't like was "You Can Have the TV," a song about a couple splitting up and so, they are splitting up their stuff. Too depressing for me (you take this--I'll take that). Still, the song is done well.

One of my favorite Manilow songs is also here. "If We Only Have Love", from the 1968 Jacques Brel is Alive and Well and Living in Paris. I have this song on another Manilow album and did not realize it was from a musical. (If we only have love, we could stop all the bad stuff and make the world a better place.) So true. I wish everyone felt this way and just tried a little harder to find the love, instead of the anger.(--Oh well, dream on.)

Anyway, "Dancing in the Dark" is so beautiful. It makes me wish I could go ballroom dancing right now, and just dance off on a cloud into the stars. What a fantastic song!

"I'll Be Seeing You" is from the 1938 musical "Right This Way," but I will ALWAYS remember it as Liberace's theme song, and I betcha Barry remembers too. My brother and I (God rest his soul) were GLUED to the TV in the 50s(?) watching this extraordinarily talented master showman perform. When I heard this song, it brought back the memories of the glitzy band jackets, the white piano, and the candelabra. But, more than anything, the show always ended with "I'll Be Seeing You," and, to the best of my recollection, it sounded just like Barry does the song. I suspect Liberace is looking down saying, "Thanks, Barry, for remembering me."

There are many other songs, as you can see from the list, such as "All I Need is the Girl", from Gypsy. I would be remiss if I forgot to mention the daunting "Bring Him Home" from the 1985 Les Miserables, where an older man is asking God to take care of a boy going off to war and to bring him home. "If I die; let me die. Let him live; bring him home." It touches your heart.

"The Kid Inside" is just awesome. "There's a kid inside, and I have him with me always. . . He's there again. . .singing Come Along, Come Along for the ride . . .there he goes again!" I LOVE this song soooo much. It reminds us of the child inside us all. My friends, whatever you do, PLEASE, do not let the child inside you die. He will keep you young and alive! :)

A very enjoyable album, I'm so glad I got it!

Free†Dove
3.0 out of 5 stars Do Not Buy CDs Which Do Not List The Songs On It
Reviewed in the United States on May 15, 2015
Verified Purchase
I bought this CD thinking it might have some of Barry Manilow's rare songs I didn't have. However it was just a new cover and I had never heard of the name for this CD and the seller did not list any of the songs. But I can always give it to a family member or a friend who doesn't have any of Barry's songs on it.
Read more
One person found this helpful
Helpful
Comment Report abuse

Ray Hedin
5.0 out of 5 stars YOU WILL WEAR IT OUT
Reviewed in the United States on May 14, 2014
Verified Purchase
Great choice of songs! Barry has outdone himself with this mix of great show tunes. The arrangements are foot tappers and have an heire of excitement about them. Don't wait, You will love it and find that it the most played Barry Manilow album you have. It isn't the "same ol, same ol" Barry that you would expect..... every song is a genuine surprise!
Read more
One person found this helpful
Helpful
Comment Report abuse

Debbie W.
4.0 out of 5 stars Barry Manilow Showstoppers
Reviewed in the United States on November 4, 2009
Verified Purchase
Barry Manilow Showstoppers is another great work of Barry's. I love Broadway tunes and since I can't get to as many Broadway shows as I would like, this cd helps to make up for it. Look to the Rainbow is definitely my favorite, one of the most beautiful songs I have ever heard. A close 2nd is If We Only Have Love. This is a very enjoyable cd.
Read more
One person found this helpful
Helpful
Comment Report abuse

tquartana
5.0 out of 5 stars Love this CD
Reviewed in the United States on October 9, 2013
Verified Purchase
I have always loved this CD. I owned it prior and my CD
case with so many CDs were taken out of my car. I love
show tunes and this is a wonderful rendition. I always
wish I could have seen the Broadway shows.
Read more
One person found this helpful
Helpful
Comment Report abuse

Miami University Grad
5.0 out of 5 stars Brings Broadway to Life
Reviewed in the United States on May 4, 2015
Verified Purchase
It lives up to its name...showstopper!
Read more
Helpful
Comment Report abuse
See all reviews from the United States

terry
5.0 out of 5 stars Value good service
Reviewed in the United Kingdom on January 19, 2019
Verified Purchase
Wasn’t for me lol
Read more
Helpful
Sending feedback...
Thank you for your feedback.
Sorry, we failed to record your vote. Please try again
Report abuse

pammy
5.0 out of 5 stars barrys showstoppers
Reviewed in the United Kingdom on April 29, 2014
Verified Purchase
bought this for my friends birthday, she was thrilled with it as she said it was a lovely change to hear songs other than his usual famous ones. she even ended up on a saterday radio programme when she was choosen to submit a song with a story to tell. so she chose a track off this album. she ended up having the track played, plus a very long chat on air with graham nordon.
Read more
Helpful
Sending feedback...
Thank you for your feedback.
Sorry, we failed to record your vote. Please try again
Report abuse

olwen lloyd-thomas
5.0 out of 5 stars I LOVE BARRY MANILOW
Reviewed in the United Kingdom on April 2, 2014
Verified Purchase
THIS IS THE BEST OF BARRY IT HAS EVERY THING I WOULD RECOMMEND THIS TO EVERY ONE
BEST PERFORMER EVER.
Read more
One person found this helpful
Helpful
Sending feedback...
Thank you for your feedback.
Sorry, we failed to record your vote. Please try again
Report abuse
Load more international reviews

kenherbie
5.0 out of 5 stars barry at his best
Reviewed in the United Kingdom on December 2, 2012
Verified Purchase
This album has it all. Barry has wonderful arrangements, a great orchestra and the duettists are awsome. This is a different side of a great artist and well worth hearing.
Read more
2 people found this helpful
Helpful
Sending feedback...
Thank you for your feedback.
Sorry, we failed to record your vote. Please try again
Report abuse

S. K. THORNE
5.0 out of 5 stars MANILO AT HIS BEST!
Reviewed in Canada on April 12, 2011
Verified Purchase
FOR ANYONE WHO LOVES BARRY MANILOW, AND ESPECIALLY FOR ANYONE WHO IS INTO BROADWAY TUNES, THIS CD IS ABSOLUTELY THE BEST!! i HEARD SOME SONGS FROM IT A NUMBER OF YEARS AGO, AND NEVER FORGOT IT. "LUCK BE A LADY" AND THE OVERTURE ARE ESPECIALLY OUTSTANDING. IT IS WORTH ANY COST TO HAVE THIS CD. SYLVIA
Read more
Helpful
Sending feedback...
Thank you for your feedback.
Sorry, we failed to record your vote. Please try again
Report abuse

Terry Gibbs
5.0 out of 5 stars Five Stars
Reviewed in the United Kingdom on November 11, 2014
Verified Purchase
I ALREADY GIVEN FEEDBACK ON THIS PURCHASE.
Read more
Helpful
Sending feedback...
Thank you for your feedback.
Sorry, we failed to record your vote. Please try again
Report abuse

JOHN DONCASTER
5.0 out of 5 stars Five Stars
Reviewed in the United Kingdom on April 27, 2017
Verified Purchase
Prviously had this cd on cassette,knew what to expect which as usual was great
Read more
Helpful
Sending feedback...
Thank you for your feedback.
Sorry, we failed to record your vote. Please try again
Report abuse