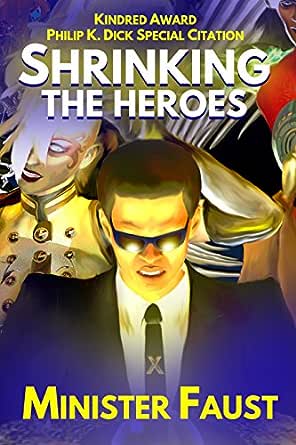 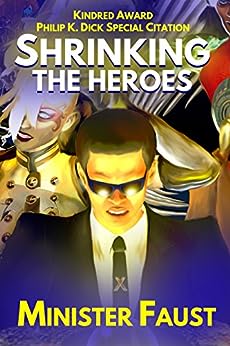 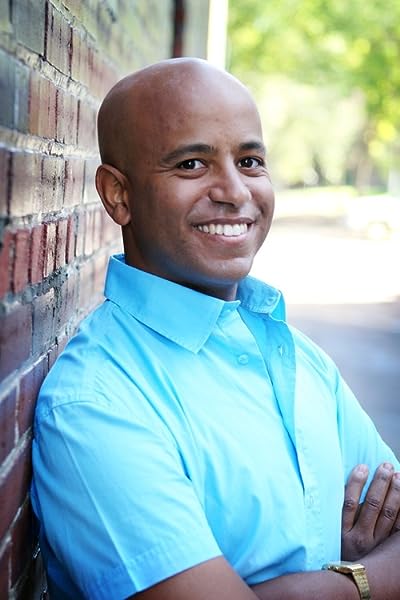 Minister Faust is a long-time community activist, writer, journalist, broadcaster, public speaker and martial artist in several disciplines. After deciding to become a comic book writer and artist when he was ten, he secretly changed his ambition to science fiction novelist after glancing through the glossary to Frank Herbert's Dune. He'd planned to become an ecologist so as to gain Herbert's ecological depth, but before his first university class switched his entire enrollment to English Literature, having concluded that learning to write was more relevant to the career of a writer, and that going to endless lab classes at 7 am for four years would likely be hell on earth. As a member of E-Town's anti-fascist movement in 1990, he and other youth marched on a Nazi skinhead gang house, the hub at that time of a series of violent assaults. Confronted there by skinheads with guns, Minister Faust held them back with nothing but the power of his words. Thus began a speaking career that has taken him across Canada and before of crowds in the tens of thousands. A radio broadcaster from 1989 until 2012, he hosted Africentric Radio (formerly The Terrordome), for which he interviewed luminaries such as Tariq Ali, Molefi Kete Asante, Martin Bernal, Noam Chomsky, Chuck D., Austin Clarke, Angela Davis, Karl Evanzz, Tom Fontana, Glen Ford, Nalo Hopkinson, Reginald Hudlin, Ice-T, Janine Jackson, Michael Parenti, Ishmael Reed, Gil Scott-Heron, Vandana Shiva, David Simon, Scott Taylor, and many more. As a radio and print journalist, he's gone as far as the 1995 Million Man March in Washington, DC, and to the Ain-al-Hilweh Palestinian refugee camp in southern Lebanon, to collect stories and hear directly from people living and making history. A maverick novelist increasingly described as one of the finest voices of his generation, Minister Faust is the author of the critically acclaimed The Coyote Kings, Book One: Space-Age Bachelor Pad, The Alchemists of Kush, and the Kindred Award-winning Shrinking the Heroes. His latest is War & Mir, Volume I: Ascension. Minister Faust refers to his sub-genre of writing as Imhotep-Hop--an Africentric literature that draws from myriad ancient African civilisations, explores present realities, and imagines a future in which people struggle not only for justice, but for the stars. --This text refers to the paperback edition.

Patrick RichardsFink
4.0 out of 5 stars Superheroes, psychiatry, and race relations: Kot-tam tasty!
Reviewed in the United States on September 23, 2011
Verified Purchase
Like psychiatry? Like superheroes? Want to see what happens when the two intersect? Add in Minister Faust's ear for language, spot-on skewering of pop (and academic) psychological tropes, superhero comic conventions, and racial issues in the world of high-powered hyperhumans (and in the world of ordinary folks). Recommended read -- or, as Mr.X-Man would say, "Kot-tam tasty!"
Read more
3 people found this helpful
Helpful
Comment Report abuse

SciFiMagpie
5.0 out of 5 stars One of my favorite subversive superhero stories
Reviewed in the United States on September 4, 2013
I have this book under its other title, 'From the Notebooks of Dr. Brain'. I don't hand out 5*s like candy, so I'll explain why I like it so much.

The characters are well-developed and layered, in spite of a very narrow-minded first-person narrator. They go through their own struggles and move easily between realism and cartoon motion. The setting is brilliantly subversive, and the ending...I can't talk about it. It's amazing. Also, as a person with a counselling degree and plenty of knowledge about self help, this book was too deliciously satirical and on the mark not to enjoy.

The only criticism I have is that it's a bit expository and some readers might not like the political stuff. Me, I thrive on that.

So, for brilliant and perfectly-tuned prose, ripping satire, and a superhero story you'll never forget, look no further. This book is a must-read. Faust's other books are also fantastic, and should be next on your list.

Zig Zag Claybourne
5.0 out of 5 stars Kicks Real Ass
Reviewed in the United States on September 4, 2013
Nobody does deconstruction and rebuilding of genres like Minister Faust. Humor, action, and prose to die for. Shrinking the Heroes will remind you why you originally fell in love with heroes and why modern times pretty much killed them. If you have a love of imagination and spandex, this book is not recommended it is required.
Read more
One person found this helpful
Helpful
Comment Report abuse
See all reviews