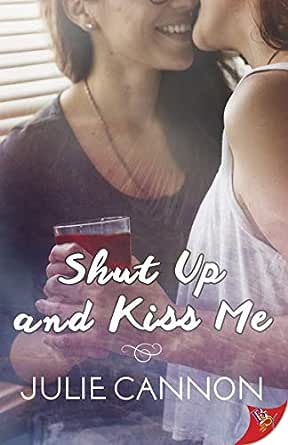 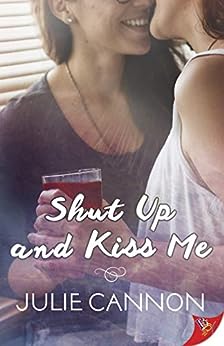 Shut Up and Kiss Me Kindle Edition

Julie Cannon divides her time by being a corporate suit, a wife, mom, sister, friend, and writer. Julie and her wife have lived in at least a half a dozen states, traveled around the world, and have an unending supply of dedicated friends. And of course, the most important people in their lives are their three kids, #1, Dude, and the Divine Miss Em. Julie’s novel I Remember won the Golden Crown Literary Society's Best Lesbian Romance in 2014. Visit her website: JulieC annon.com --This text refers to the paperback edition.

4.1 out of 5 stars
4.1 out of 5
32 customer ratings
How does Amazon calculate star ratings?
Amazon calculates a product’s star ratings based on a machine learned model instead of a raw data average. The model takes into account factors including the age of a rating, whether the ratings are from verified purchasers, and factors that establish reviewer trustworthiness.
Top Reviews

Amazon Customer
3.0 out of 5 stars Easy Read, but Author Repeats Details Throughout the Book
Reviewed in the United States on April 15, 2019
Verified Purchase
I usually don't write reviews, and if I do I always wait until the end of the book, but in this case I just have to say this. I am like 90% through the book and the one thing that keeps striking me, that I can't seem to ignore, is that this author keeps repeating things. I cannot tell you how many times lowe mentioned that she has a few extra pounds, but that shes happy with how she looks. More then once faith tells lowe that its against the rules to be with her and everytime lowe is surprised, like really its not like you told this to me 50 pages ago. Its like the author ran out of details and so she just keeps repeating the same ones as conversation filler and everytime the person treats it as knew information. Anyway, besides that this is a good beach book or read on the train home from work book.
Read more
2 people found this helpful
Helpful
Comment Report abuse

Curtie
2.0 out of 5 stars Not worth it.....
Reviewed in the United States on February 19, 2019
Verified Purchase
I was dissapointed with this offering. I never felt the "spark" the author insisted was palpable between the two primary characters. The supporting cast were caricatures of snobby, rich, and pretentious homophobes. There was nothing new here so the book was neither compelling nor memorable.
Read more
2 people found this helpful
Helpful
Comment Report abuse

Kindle Customer
4.0 out of 5 stars Love on the high seas
Reviewed in the United States on February 15, 2019
Verified Purchase
This is a fun book to read on a plane, at the pool or on a cruise! :) I enjoyed it to the end, and I'm glad I read it. The ending was clever, but the difference between 4 and 5 stars is that uneasy feeling of their HEA without an epilogue a yr later.
Read more
One person found this helpful
Helpful
Comment Report abuse

LisaStrauch
5.0 out of 5 stars it was a good book
Reviewed in the United States on April 17, 2019
Verified Purchase
I liked the book
Read more
Helpful
Comment Report abuse

Kindle Customer
3.0 out of 5 stars A lot of loose ends
Reviewed in the United States on September 10, 2019
Verified Purchase
I have read a couple of this writers books and in both books the story ends with lots of loose ends. I would buy more of her books because she develops well but leave the reader confused
Read more
Helpful
Comment Report abuse

Angel Hatfield
2.0 out of 5 stars just wasn't for me
Reviewed in the United States on February 12, 2019
Lowe’s best friend was Charlotte . She gave Lowe a handful of Valium saying Lowe was going to need them. Lowe was flying to the other side of the world to spend the next three weeks with her sister Victoria and parents cruising the high sea. It was time for Lowe to once again show her respect, pay her dues and not have her mother's non-stop guilt for the rest if her life if she didn’t go. First she hated how her sister was. Victoria was manipulating, obnoxious, pretentious- a S-N-O-B! Victoria is shallow, she has her therapist, and yoga instructor on speed dial and never been called anything other but Victoria in her life. She is five years younger than Lowe. Victoria is married to Everette who is everything she ever wanted in a mate- position. prestigious, and money. Victoria and their mother are two peas in a pod. Her father isn’t quite as bad as her mother but he doesn’t socialize outside his circle. Lowe’s job as the firstborn in a long family legacy is to carry on the obligatory family name- Lowe carter. Lowe prefers to play with the boys but her mother would not allow it. Lowe has her own business, she also volunteers at several homeless shelters. Lowe drives a twenty year old Toyota 4 Runner because she loves it. Driving a new car isn’t what lowe is about. She about common sense, living on what she earns, honesty, and respect. She lives in a normal size house in a modest subdivision. Lowe is the opposite of everyone in her family. Her parents live on a ship-the Escape.It is the largest residence on the water, a very upscale community with shopping, restaurants, pools, Starbucks and Peet’s coffee shops a full size tennis court, a large patio and a cushioned running track.Lowe loves her sister and parents but can only tolerate them in short bursts. They don’t have much to talk about and they stay away from controversial topics, which are most of them. Lowe is gay. Faith works on the ship Lowe’s parents live on. Her job included room and board. Faith has called the Escape home for eight years. Faith had a mysterious woman keeping her subconscious company for months. Dating residents was strictly forbidden. Dating other workers was frowned upon. This situation didn’t leave many opportunities to meet others or relieve pent up sexual tensions, other than with locals in ports they docked at. Faith had been waiting tables in Tampa when she lucked into a job when the Escape was in port. Faith passed the psychological testing, on site interview, and background check. They typically signed on for ten to twelve month assignments. Once they put in their time, they either remain or go home. Faith resigned every time. The job was good as Faith got to see places and meet people she would never have known otherwise. They work about fifty hours a week with two days off. They weren’t paid much and faith sent most of her pay home and would pick up extra hours when she could. She worked at The club.
I didn’t realize this book was about two gay women guess the name lowe for a girl didn’t register to me. I hate to rate this book as I can’t give it a fair rating as I don’t care to read gay romances. So I gave this a two my fault - sorry.

Ragdollprof
3.0 out of 5 stars A Cruise Romance
Reviewed in the United States on March 5, 2019
This is a nice romance about two women from very different economic backgrounds. Lowe Carter comes from a wealthy family. Her parents are retired and live fulltime on a cruise ship that travels the seas year-round. Lowe’s family feel they are privileged and believe that the only worthwhile people are those who have money. All others are there to serve. Lowe, however, worked hard and built a very successful business on her own. She treats people fairly.

Faith Williams, on the other hand, comes from a very poor, dysfunctional family. She has worked on the cruise ship for many years and is a valuable employee. Faith has a strong work ethic. She follows the rules and is very responsible. Each pay period she sends money home to her mother and little sister in Tampa.

The cruise line has one major rule. Employees are not allowed to get into a relationship with individuals living on the ship and any of their family members. Breaking the rule will result in termination.

While visiting her parents, Faith runs into Lowe. There is instant attraction, but the rules must be followed. Faith does not want to have a fling and lose her well-paying job. Initially, Lowe is looking for a vacation romance, but finds the draw to Faith different from anything she has previously experienced.

The plot was not that different from other romances. Unfortunately, it was written in the first-person point of view. Several times I had trouble determining who was talking. This caused a break in the flow of the story and seemed to make the story drag.

I have read many of Julie Cannon’s books and this is not one of her best. Because the story was set in the first-person point of view, I can only give the book 3 out of 5 stars.

I was given this ARC in return for a fair and honest review.

Bookgirrl
4.0 out of 5 stars A good long slow burn romance
Reviewed in the United Kingdom on April 20, 2019
Verified Purchase
As always this author deliverers a slow burn Booking.com, loved the premise and the story, in response to other reviews, it’s not a literature prize winner but it’s a fab read!
Read more
Helpful
Sending feedback...
Thank you for your feedback.
Sorry, we failed to record your vote. Please try again
Report abuse