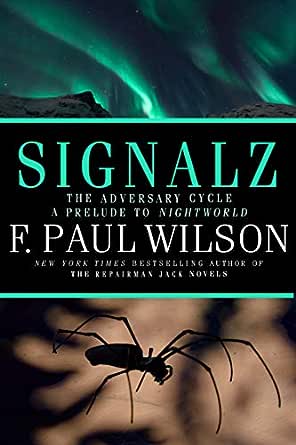 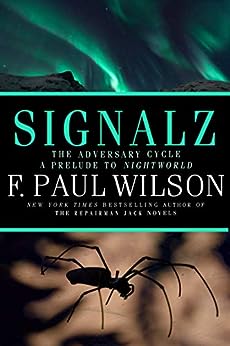 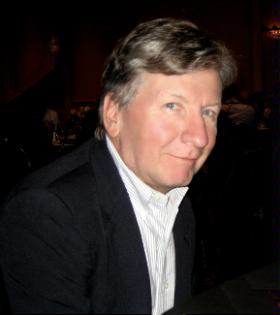 "F. Paul Wilson...carries the legacy of Lovecraft into the 21st century and wields the banner of the champion of weird fiction in horror literature, all the while retaining a distinct style of his own. He takes Lovecraft's odd sensibilities and makes them palatable to a wider audience while still maintaining the essential strangeness that made HPL so groundbreaking."
--Cinepunx.com

4.6 out of 5 stars
4.6 out of 5
236 global ratings
How are ratings calculated?
To calculate the overall star rating and percentage breakdown by star, we don’t use a simple average. Instead, our system considers things like how recent a review is and if the reviewer bought the item on Amazon. It also analyzes reviews to verify trustworthiness.
Top reviews

James Tepper
VINE VOICE
2.0 out of 5 stars Move along. Nothing to see here
Reviewed in the United States on July 8, 2020
Verified Purchase
THE ADVERSARY CYCLE by FP Wilson, culminating in the epic novel, NIGHTWORLD, is one of the all-time classic works in sci-fi-fantasy. It is the keystone work upon which Wilson bases his modern day Lovecraftian mythos about cosmic entities from beyond space and time that are locked in an eternal battle for the Earth, all behind the scenes. This History permeates almost all of Wilson's fiction since THE KEEP, published in 1981 and extending throughout all of the REPAIRMAN JACK novels, the three novel ICE SEQUENCE and a large number of one off novels up through 2019. One day I stumbled across THE TOMB (the first RJ novel published in 1984) in paperback in a CVS in 2000. It was great and I went out and ordered all the FPW RJ novels and ADVERSARY CYCLE novels and read them all as soon as I could get my hands on them. I have reviewed most of them here and almost everything was 4 or 5 star material.

At the end of NIGHTWORLD (first published in 1992 and then heavily revised and re-released in 2012 to become congruent with the RJ novels), FP Wilson stated (many times) that there would be no more novels taking place after the conclusion of NIGHTWORLD. But he got around that by writing additional RJ (and other) novels that were set earlier in time, that continued the *Secret History of the World* to great effect. These too, were wonderful.

And now we have SIGNALZ. A brand new novella that runs in parallel with NIGHTWORLD, with all (but one) new characters, and taking place at the same time and places, but from a different point of view. It starts with a teenaged Ellie who, along with her mother is visiting her older sister attending University in NYC. Ellie hears something that no one else hears that draws her to Sheep Meadow in Central Park (well known to readers of NIGHTWORLD and other past FPW works). Something terrible happens and Ellie ends up in coma for months. When she awakens, she is... radically changed. At this point we synchronized with the start of NIGHTWORLD, give or take a day.

So far, so good, but then it all goes rapidly downhill. There is little or nothing new revealed about the Secret History. There are several callbacks to WARDENCLYFFE, an excellent one-off FPW part of the Secret History. We revisit a couple of characters and organizations that played key roles in THE ADVERSARY CYCLE and the RJ series. A couple of brand new characters are introduced. They are sort of interesting but eventually go nowhere, and by the end, which is synchronous with roughly the start of the really interesting events of NIGHTWORLD, we have really gone nowhere.

Yes, there are the typical well written FPW terror-inducing Lovecraftian scenes (but we've seen this all before) but really, there is nothing new here to see. If anything, SIGNALZ kind of leaves a bad taste in the mouths of big time fans of all the series and novels mentioned above. And if you happen to NOT have read most or all of these, I doubt that much of this novella will make much sense to you.

It pains me greatly to write this review. But I calls 'em as I sees em. FPW is a great writer. But this time he whiffed.

Dale
5.0 out of 5 stars NOT EVERYONE WILL HEAR THE END OF THE WORLD!!!
Reviewed in the United States on August 26, 2020
Verified Purchase
It was just like any normal day in New York City at Christmas. Crowds...traffic...people too caught up in their lives and their holiday shopping. But NYC at Christmas...with its lights and decorations...was always that much more special. But for Barbara, that was only the beginning of the nightmare.

When F. Paul Wilson created his SECRET HISTORY OF THE WORLD (SHOTW), the amazing stories that he had previously written suddenly began to form a tapestry that he added to by the books and short stories that he began to produce that pushed the conflict between the ADVERSARY and the OTHER towards their inevitable confrontation. That final battle was originally chronicled in the first release of NIGHTWORLD in 1992. But...the author had plans!! And his entire universe exploded as Wilson began to expand on the role of Jack, the everyman who was the lead character in what became known as THE REPAIRMAN JACK series. As more and more of those exciting and thrilling stories moved the SHOTW forward. The original final trilogy - Reborn, Reprisal, and Nightworld - had become a little dated and anachronistic. But...that just gave the readers the opportunity to read new, edited and updated versions with the rewritten final release of NIGHTWORLD being released in May of 2012.

Wilson stated that he had no plans to write any further books centering around the ADVERSARY that were dated AFTER the events in NIGHTWORLD...BUT...that didn't mean we wouldn't see new adventures and new stories that filled in the gaps of the past as the Wilson gave use two trilogies set in the past during the years that would mold Jack into the force and the chosen one that he would become.

In SIGNALZ, Wilson runs the clock back briefly from the final conflict to the previous Christmas (also the setting of, and a sort of sequel to the book LAST CHRISTMAS previously released), setting events that are then brought into play as the book jumps to just days before the events in NIGHTWORLD. The story is fairly self contained and takes place over the span of four days. As an added easter egg, Wilson also touches upon events that take place during the story WARDENCLYFFE that was another wonderful brief story set in the time of Nikola Teslas attempt to harness earth power. The book does give answers to some of the questions that have developed during the past
eight years as more stories have been added into the tapestry.

This was a fun book for me and kept my interest solidly fixed on the story until the end as well as making me smiling as little facts and stories were revealed that I had questions about earlier. And...don't miss the character of P. Frank Winslow...Classic!!!
Read more
One person found this helpful
Helpful
Report abuse

ReginaL.Rakoncay
4.0 out of 5 stars Same place, same time, Another great story.
Reviewed in the United States on July 8, 2020
Verified Purchase
Loved it. Followed the Adversary line and gave insight into other stories that were created during that time. Enjoyed the characters, and real tie ins (no spoilers). The story was funny,scary and a true sci-fi thriller mix. The one issue I had was the ending. It came too soon, with what I felt was too many trailers or duh ta dunnnns. For those that religiously follow the series, we know what came next. Except with this ending we are introduced to openings , for me, that conflicted with the continuity instead of meshing. Overall, a fantastic story in the Adversary series.
Read more
2 people found this helpful
Helpful
Report abuse

Keith B.
VINE VOICE
4.0 out of 5 stars Decent But Short
Reviewed in the United States on September 11, 2020
Verified Purchase
This was good, not great. Shoehorning stories into a timeline we already know is a little hard. We know who's going to be around for the last novel and what happens then so you have to be careful with your cast of characters. My issues with the book include jumping not only this time from viewpoint to viewpoint but also from objectives, first person to third in the narrative. It was a little annoying jumping from viewpoint to viewpoint. At least it wasn't several so it's not that bad and all the chapters relate and resolve in the end. The next thing is just silly. The author puts a parody of himself and his Secret Histories into his own story. Something seen years ago in the episode 'The Real Ghostbusters' of the TV show Supernatural.
That being said the book was a decent but short read. I finished it in a day. It fit okay into the Adversary cycle of books.
Read more
Helpful
Report abuse
See all reviews

dog walker
4.0 out of 5 stars Not sure at the moment
Reviewed in the United Kingdom on July 14, 2020
Verified Purchase
Haven’t had chance to finish this book yet but was unimpressed upon arrival as very thin bearing in mind the cost. Appears to be a rehash of some of the authors earlier books but only time will tell.
Read more
One person found this helpful
Report abuse

J. HILTON
5.0 out of 5 stars A missing chapter filled
Reviewed in the United Kingdom on August 8, 2020
Verified Purchase
Perfectly paced and written.
The Repairman Jack books remain one of my all time favourite series. Signalz fits into the Adversary/Jack timeline perfectly. I hope F Paul Wilson explores many more offshoot takes like this one. So many more tales to tell.
Read more
Report abuse

Amazon Customer
5.0 out of 5 stars Great birthday pressie!
Reviewed in the United Kingdom on August 18, 2020
Verified Purchase
Bought this as a pressie for my husband's birthday. It arrived ahead of estimated delivery date which was great. He said it was very, very good.
Read more
Report abuse
See all reviews