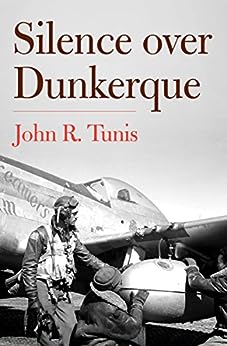 “. . . a solid novel . . . strong in suspense and characterization, sprinkled with realistic detail. The old pro [Tunis] has wound a lively tale around one of the turning points of World War II—the minutes before ‘their finest hour.’” —Robert Hood, The New York Times

John R. Tunis (1889–1975) was a novelist and sportswriter best remembered for his series of novels about the Brooklyn Dodgers in the 1940s and ’50s. Born in Boston, Tunis graduated from Harvard University and then served in the Army during World War I. He began writing sports columns in 1925 and was soon contributing to dozens of publications, including the New Yorker, Reader’s Digest, Esquire, and the Saturday Evening Post. A tennis player himself, Tunis broadcast the first Wimbledon match to air in the United States in 1934.

4.3 out of 5 stars
4.3 out of 5
19 global ratings
How are ratings calculated?
To calculate the overall star rating and percentage breakdown by star, we don’t use a simple average. Instead, our system considers things like how recent a review is and if the reviewer bought the item on Amazon. It also analyzes reviews to verify trustworthiness.

Jeff Ryan
5.0 out of 5 stars Novel about British soldiers in the 1940 Dunkirk evacuation in WW 2 France
Reviewed in the United States on April 8, 2021
Verified Purchase
This is an excellent novel about the trials and tribulations of a British Army sergeant fighting in the Battle of
France in 1940. After several reverses from the invading German Army, much of the British Expeditionary Force
is hemmed in on the Channel coast of France. The French port of Dunkirk (Dunkerque) is one
of the main evacuation points for the trapped soldiers, and they are being pressed by the German military forces,
including the Luftwaffe, which is bombing the evacuation beaches and the ships attempting to take the troops
away. Sgt. Williams is the main character, but his twin teenaged sons in Dover also get involved when they
unofficially become deck hands on a private British yacht which has been chartered for the evacuation.
The novel was written by John Tunis, a British sports journalist who also wrote books for younger readers, mostly with sports themes. This story is one of the exceptions, and it's a good read. It's been around since 1965, and I first read it in 1967 when I was in elementary school, but it holds up well. The setting is the Battle of France in
May-June of 1940, with occasional interludes in Dover on the English side of the Channel.

Barnacle
4.0 out of 5 stars A good read for youngsters...
Reviewed in the United States on September 8, 2017
Verified Purchase
A very old-fashioned adventure book, but none the worse for that. It's easy and entertaining to read for all ages, and while fiction it's a reasonably accurate representation of a real event and I think does a good job of communicating to the reader the atmosphere and attitudes of that period, as well as having credible sympathetic characters to carry the story along. Also, unusually for a book of this nature, it has a young girl as one of the principal protagonists. Clearly it's aimed at a younger audience so we're spared graphic depictions of the horrors of war, but it nevertheless maintains a narrative tension that gives a small taste of what it must have been like for those that participated in the actual event.

I'm not sure why this book is illustrated on Amazon by an American pilot and air crew loading fuel tanks onto a P51 (I think), when it's entirely about a British infantryman's experiences of the Dunkirk evacuation and its aftermath, but that's a minor criticism!
Read more
One person found this helpful
Helpful
Report abuse

Louis
5.0 out of 5 stars Could not put down
Reviewed in the United States on July 28, 2017
Verified Purchase
Heard Colbert talk about this book on his show. Having just seen the movie was interested. Even though it is a novel (I like historical fiction) and an obvious attempt to buck up the people, it was exciting and you kept rooting for the Brits to the end. Including a dog was genius as there is an ongoing sense of dread over it's survival. A short book it is a quick read but totally worth it. I would recommend it to any one who likes adventure books, historical fiction, war books, or anyone who just enjoys a good read.
Read more
4 people found this helpful
Helpful
Report abuse

Someone Special
5.0 out of 5 stars Did not stop reading until finished
Reviewed in the United States on February 26, 2020
Verified Purchase
This book is a great look into an anecdotal small-scale story of a few brave men who got out of the French town of Dunkurque during the B.E.F. retreat in May of 1940. Great detail was given to every step of their journey.
Read more
Helpful
Report abuse

Will
4.0 out of 5 stars Four Stars
Reviewed in the United States on October 24, 2017
Verified Purchase
Quite an ordeal those Brit's and other went through.
Read more
Helpful
Report abuse

Amazon Customer
5.0 out of 5 stars Loved it then - Love it now
Reviewed in the United States on August 26, 2017
Verified Purchase
I read the book 5 or 6 times in grade school. Fifty years later it's still a favorite. A remarkable story of courage.
Read more
Helpful
Report abuse

Ceci
4.0 out of 5 stars Nice story, fun to read after seeing the film
Reviewed in Spain on September 1, 2017
Verified Purchase
Touching, nice, educational, situates you as to the story of the retreat from the Germans at the beginning of WWII. A story of solidarity and tough situations.
Read more
Report abuse
Translate review to English
See all reviews
Back to top
Get to Know Us
Make Money with Us
Amazon Payment Products
Let Us Help You
EnglishChoose a language for shopping. United StatesChoose a country/region for shopping.
© 1996-2021, Amazon.com, Inc. or its affiliates