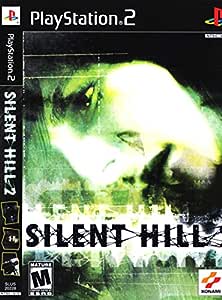 Silent Hill 2 pushes the boundaries of horror. Return to the dense fog and frightening darkness of the eerie, haunted town of Silent Hill to face new enemies with a new set of terrifying weapons. Features enhanced weather, gore and visual expressions with a soundtrack presented in dramatic Dolby Surround. Made in USA.

With its Poe-like atmosphere, dense fog, pitch-black hallways, and a cryptic letter from a dead wife, Silent Hill 2 promises to surpass the paranoia created by its predecessor, Silent Hill.

The sequel opens with James Sunderland, the series' average joe protagonist, and a mysterious message that reads, "Silent Hill, our sanctuary of memories. I'll be waiting for you there." More puzzling is that the note is signed by Mary, his deceased wife.

James sets out for Silent Hill hopeful that he'll find a trace of Mary. After an aborted attempt by car, James plunges into the dank fog and embarks on his quest by foot. Enter Angela, a woman who bears a striking resemblance to Mary, and who also beckons him with another curious message. It seems James can't go back; strange things are happening in Silent Hill.

Silent Hill 2 offers 10 new formidable foes, plenty of puzzles, and bone-chilling gameplay. The sequel's new story and characters promise to thrill and terrify. The visual and sound effects are amazingly detailed and macabre, and, if you're playing on a system with surround sound, you may find yourself keeping the lights on.

4.7 out of 5 stars
4.7 out of 5
379 global ratings
How are ratings calculated?
To calculate the overall star rating and percentage breakdown by star, we don’t use a simple average. Instead, our system considers things like how recent a review is and if the reviewer bought the item on Amazon. It also analyzes reviews to verify trustworthiness.

Robert Kiehn
4.0 out of 5 stars Horror Survival at it's finest!
Reviewed in the United States on February 26, 2012
Verified Purchase
Silent Hill 2 is probably one of the bets survival horror
games ever made.

You play as James Sunderland, whose wife Mary has
just died 3 years ago or so it seems. James receives
a letter from his dead wife asking him to meet her in
the sleepy resort town of Silent Hill.

The game plays just like the original Silent Hill
but the graphics and sound are much better and
so is the gameplay.

It is much more scarier and atmospheric as well
esp. when you are exploring abandoned buildings
and Silent Hill outside at nightime.

The enemies are really creepy and scary. There
are items to find throughout the games such as
health drinks, first aid kits, many weapons and
ammo for them as well as melee weapons which
don't require ammo.

The town of Silent Hill has many areas to explore though
on a somewhat liner but thrilling path. Areas include
various outdoor locations, an apartment complex, an
abandoned hospital, Silent Hill Historical Society,
Tulca Prison, The Lakeview Hotel and a few other
locations including nightmare/alternate versions
of said areas and locations. You also have a map
but can only see it if you have access to light or a
flashlight.

James has a flashlight he will get eventually as well
as a radio. The flashlight is good for exploring in dark
places and the radio emits static when enemies are
nearby.

The Boss fights are not that hard except on hard difficulty
level. On Normal and Easy they are a piece of cake almost.

The storyline has some interesting characters in it but
it is hard for some people to understand and requires
reading some online material from Silent Hill websites
in order to understand.

There are multiple ending for people that play through
the game multiple times in different ways as well as some
bonus weapons like a chainsaw and hyperspray when playing
the game a 2nd time and beyond.

The cutscenes and voice acting are well done throughout
the game.

All in all this is a good but short (took me 15 hours to beat
first time through, second and third times and beyond only
6 hours) that is really creepy, scary and has an intense
atmosphere about it.

If you like Silent Hill games or Resident Evil ones even
Alan Wake I recommend this game.

matt
5.0 out of 5 stars my favorite game ever - by far
Reviewed in the United States on July 15, 2009
Verified Purchase
i dont write reviews often but i felt this game deserved one after seeing the average review is only about 4 stars.

this game is amazing. the story, soundtrack, sounds, gameplay, designs of environment and characters, etc. are all the best ive ever come across in a video game, no exaggeration. when i first started playing i couldn't stop, even when i had important things to do. so far out of the horror video games ive played, this is by far the scariest. at one point in the game i actually half-screamed, which is something i never do.

the replay value, for me at least, is high as well. most of the time with games that tell a story, once you beat it thats the last you'll ever play it, even with games with multiple endings. this game has multiple endings, but most of the replay value comes from learning more about the story. the story isnt told to you in a straightforward manner and you have to think about what is going on.

another thing i love about this game is that although its filled with various monsters/creatures, it still seems very real. the characters have realistic personalities and flaws. i could say something about the details of the monsters/creatures, but dont want to spoil any of the story whatsoever.

i beat the first silent hill and moved on to silent hill 2 with no problems. now this week i've been playing silent hill 3 and while its a great game as well, all i can think about is playing silent hill 2 again. if you missed out on playing this game for a couple of years like i did, don't wait any longer. if this is your type of game you should love it.
Read more
4 people found this helpful
Helpful
Report abuse

Dominic K
5.0 out of 5 stars One of the best Horror Games out there
Reviewed in the United States on June 21, 2019
Verified Purchase
Silent Hill 2 is a masterpiece of its genre which is survival horror. It's got an incredible story that will stick with you long after you play and and engulfing atmosphere of gloom. However I will say it might not be for everyone. If survival horror isnt your cup of tea than it might not be for you.
Read more
Helpful
Report abuse

Paul Ferrell Brown
5.0 out of 5 stars An Artistic Masterpiece
Reviewed in the United States on October 27, 2001
Verified Purchase
Silent Hill 2 is one of the few video games I've ever played that qualifies as an artistic masterpiece. The horror in this game comes not so much from the monsters, but from the psychological depth of its story; it deals with genuinely mature subject matter in a fashion no other console title ever has (with particular inspiration from David Lynch-- the plot owes a great deal to "Lost Highway"). The atmosphere is consistently unsettling, and the cut scenes are the best I've seen since Diablo II (and far better integrated into the game). It's also a nice change to be able to avoid fighting instead of spending all your time bashing the zombies, and the adjustable difficulty settings add to the replay value. (And contrary to what some others may say, the voice acting is generally very good.) But Silent Hill 2's greatest achievement is the way it gets under your skin, the way its eerie, ever-changing world mirrors the mental unraveling of its characters, and the way James Sunderland's sad story proves both moving and deeply disturbing. Most games are simply entertaining diversions with a plot tacked on; Silent Hill 2 is a powerful story that just happens to be a game.
Read more
Helpful
Report abuse
See all reviews