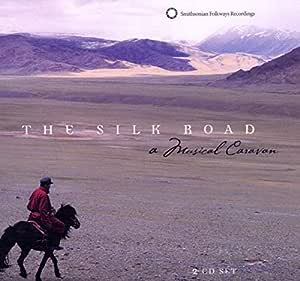 Save with Used - Very Good
$6.95
FREE Shipping on orders over $25.00 shipped by Amazon.
Arrives: Friday, Jan 22
Ships from: Amazon
Sold by: Consign for Change

The Silk Road: A Musical Caravan

What if Marco Polo had owned a tape recorder? And what if his epic travels across the heart of Asia had taken place not at the end of the 13th century, but at the beginning of the 21st? The Silk Road: A Musical Caravan presents a panoramic sweep of the vast and rich musical territory that an adventurous traveler like Polo might uncover in this vitally important region today. 2-CD, full color booklet with extensive notes, photos, 47 tracks and 146 minutes.

"What if Marco Polo had owned tape recorder?" This intriguing concept is raised in the liner notes to this impressive two-CD set, which wanders along ancient Asian trade routes known as the Silk Road. The first disc, Masters & Traditions, deals with formal styles performed by and for sophisticated connoisseurs. Meanwhile, the music on Minstrels and Lovers is played by amateurs who are part of daily life and thus reach a wider audience. The imaginary caravan passes through Iran, Kazakhstan, China, Uzbekistan, Mongolia, and Afghanistan, encountering nomads, mystics, and bards along the way. The instruments are scratchy, pungent, and/or serene, while the singers weave a potent spell out of a millennium's worth of slow-changing rural and urban vistas. In the opening essay, cellist Yo-Yo Ma, the project's artistic director, pleads for intercultural communication and empathy. This compilation provides an exotic, brave, entertaining first step in that direction. --Christina Roden

MaggieA
3.0 out of 5 stars I loved Kitaro and had purchased all the original albums
Reviewed in the United States on January 23, 2017
Verified Purchase
I loved Kitaro and had purchased all the original albums. Over the years and after several moves I lost track of those items. I purchased this because I remembered Silk Road being quite an astonishing album. Maybe the years have changed me but I was a little disappointed when I received this title of Silk Road and found it was more of a compilation of pieces, not the Silk Road of my memory. Still a nice title to add to the collection, just not the title I thought I was buying.
Read more
One person found this helpful
Helpful
Report abuse

HappyMom
3.0 out of 5 stars Just, meh
Reviewed in the United States on March 18, 2018
Verified Purchase
Started to listen to the CD and the first few songs all sounded exactly the same. I know that the instruments are a little different, but you would really have to know firsthand about what instrument is played to tell the difference (I could not, and I used to play the violin). Maybe this collection would have been better if it had been split up differently. Good background music for a party though. Nothing intrusive.
Read more
Helpful
Report abuse

Dr. Debra Jan Bibel
TOP 1000 REVIEWER
5.0 out of 5 stars Northern Exposure
Reviewed in the United States on March 29, 2007
Verified Purchase
This anthology is an outstanding survey of the northern section of the so-called Silk Road, taking us from Turkey, Azerbaijan,and Iran, through Uzbekistan, southern Siberia, China, and finally to Japan, but not in order, as the CD set is organized instead by category of musical function and the localities seem random. Although there are significant gaps in the styles, and I particularly miss the sweet lyric songs of Kyrgyz women, the powerful mugham voice of Qasimov of Azerbaijan, and more examples of the kylkobyz fiddle of Kzakhstan, the set provides a fine introduction of the musics of inner Asia and particularly the instruments. A glossary of instruments is provided, but unfortunately their images are often lacking. All the examples are short by necessity, when many traditional pieces are far longer in duration. For the uninitiated, it will take repeated listening to distinguish the uniqueness of timbre and rhythm from one land to the other; but this similarity of sounds helps demonstrate the role of the trade routes in sharing instruments and styles, such that the Japanese biwa, the Chinese pipa, and the Arabic oud all are related. If you want to attain some feel for the musics of inner Asia, then certainly these disks will meet the requirement.
Read more
9 people found this helpful
Helpful
Report abuse

Chuckles
2.0 out of 5 stars The Whole is greater than the parts!
Reviewed in the United States on August 22, 2016
Verified Purchase
Viewed the Boston Pops and Yo-Yo-Ma at Tangle-wood concert on PBS and this just didn't match up. The PBS performance was a marvelous jam session of all these unusual instruments and artists. This is a good recording but not Tangle-wood!
Read more
One person found this helpful
Helpful
Report abuse

E H
5.0 out of 5 stars Relaxing inspiring
Reviewed in the United States on November 17, 2019
Verified Purchase
Great collection. Very relaxing and inspiring to do do yoga meditation or be creative by
Read more
Helpful
Report abuse

Bob from KC
4.0 out of 5 stars Be a Marco Polo of music
Reviewed in the United States on May 6, 2007
Verified Purchase
Its rather difficult to review this in the regular like it/don't like it way. This is the endemic music of the people along the silk road the runs across Asia. Some of it sounds very strange compared to Western music, like study for an Anthropology course, while some of it very enjoyable.
Read more
5 people found this helpful
Helpful
Report abuse

Wanchese West
4.0 out of 5 stars Four Stars
Reviewed in the United States on June 16, 2017
Verified Purchase
Travelling with ones ears has seldom been more rewarding!
Read more
Helpful
Report abuse
See all reviews

A. Butler
5.0 out of 5 stars Great tracks, but they're all short
Reviewed in the United Kingdom on February 28, 2013
Verified Purchase
This is a fantastic sampler from Smisonian Folkways for a range of Asian music you may otherwise not come across. If you're looking for an alternative to today's more commercialised "world music", and especially if you like chilled out acoustic instruments played with as much depth as you'd care to listen for then this is a great place to start.
It's good listening too, everything well played well recorded.
The 'journey goes from the middle East all the way to China but most selections come from Central Asia, not somewhere that's ever been well publicised for it's uniquely beautiful music.
Only shame is that over a double album it would be nice if somewhere along the silk route trip there was time to wait around for some of the longer pieces to develop, rather than presenting excerpts. All the tracks presented here are short, and while some Central Asian styles are design to say it all in under 2 minutes there's quite a few fadeouts here that leave you wanting more.
With running times of 71 & 74 minutes you're not being short changed, but even without dropping tracks we could have had a few extended pieces at least. It's tempting to think that compiler YoYo Ma might be playing to the short attention span of the imaginary "casual listener" here.
It's all attractively and tastefully packaged, with some wonderful photos including unusual instruments and colourful costumes.
The booklet

So, buy this, and your next stop is here: