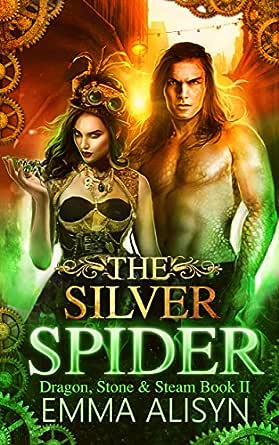 You've subscribed to Dragon, Stone & Steam! We will preorder your items within 24 hours of when they become available. When new books are released, we'll charge your default payment method for the lowest price available during the pre-order period.
Update your device or payment method, cancel individual pre-orders or your subscription at
Your Memberships & Subscriptions
There was an error. We were unable to process your subscription due to an error. Please refresh and try again. 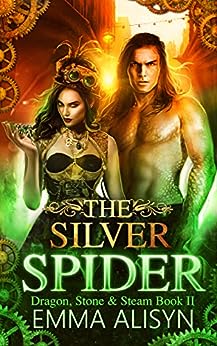 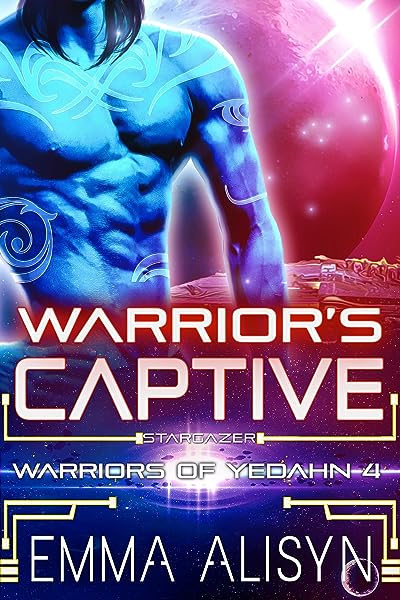 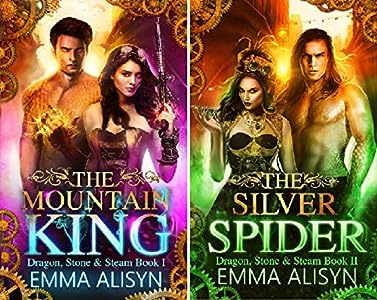 4.0 out of 5 stars
4 out of 5
135 global ratings
How are ratings calculated?
To calculate the overall star rating and percentage breakdown by star, we don’t use a simple average. Instead, our system considers things like how recent a review is and if the reviewer bought the item on Amazon. It also analyzes reviews to verify trustworthiness.
Top reviews

Jael
5.0 out of 5 stars This had me at "I don't give a flying, mechanical monkey whether I embarrass you or not"
Reviewed in the United States on May 23, 2017
Verified Purchase
This sequel to The Mountain King is a funny, sad, loving, hating, smooching, fighting suspenseful ride that I really enjoyed! The Dragon, Stone & Steam series carries on with the next chapter, surprises all along the way. Serephone and Amnan's story is touching and funny at the same time, and their characters are rounded out well.

Be sure to read The Mountain King first to get maximum enjoyment out of this series, and once you've finished The Silver Spider, you'll be eagerly looking forward to the next chapter in this series!

I had already preordered this book, and afterwards I volunteered to get an ARC. My opinions are my own.
Read more
4 people found this helpful
Helpful
Report abuse

The Umbargers
3.0 out of 5 stars 3.5 Plot hole and A lot of switching perspectives
Reviewed in the United States on June 2, 2017
Verified Purchase
I would have given this 5 out of 5 except for a glaringly obvious plot hole that brothered me because it was a side story never really given a defenite ending. I felt like the writer forgot to wrap that side story up with Hrutha and Persia or an editor overplucked and took too much out. It was a let down from the last book. I hope it gets better and it isn't too random for the next book. I also felt like it switched perspective too much. I was going into this book with the idea that this would be Serephone and Amman. I would have preferred it to mostly just be in their perspective the whole way through like the last book was with Maddaugh and Kailligh.
Read more
2 people found this helpful
Helpful
Report abuse

Christal
4.0 out of 5 stars Serephone and her Spiders
Reviewed in the United States on October 14, 2020
Verified Purchase
This is a great second in the series! Serephone is a kick ass heroine whose Fae heritage gave her a unique skill with her spiders. Amnan, a dragon shifter, is attracted to Serephone, her being his stepsister is not important. Serephone has a mission and Amnan follows her and she knew that he would. Unfortunately, her Line of Fae finds hers and holds her captive. Now along comes her mother and her dragon shifter husband who is the Lord of the Dragons where they live. Then there is a fight Serephone has to endure with her Line of Fae. Lots of action and humor.
Read more
Helpful
Report abuse

neena
1.0 out of 5 stars Disappointing
Reviewed in the United States on October 24, 2017
Verified Purchase
I have enjoyed other books by this author. Not this one. ***Spoiler alert*** The heroine, Serephone, is an idiot. I can forgive her wanting vengeance for an attack on her sister. I cannot forgive her thinking she is the only one who wants that vengeance AND she is the only one who can achieve same. Then, because of her idiocy, she is kidnapped, tortured (forced to battle a la Roman gladiators), nearly killed in those battles, and had her family threatened. But this is not enough; she swears "oath" to the being who ordered said kidnapping, etc.! No, No, NO way should anyone EVER swear allegiance to such a being in ANY romantic novel. I also lost all respect for the hero for choosing this heroine, who has no redeeming values (she admits she probably cannot love). The first book of this series was good; after this one, I will not continue the series.
Read more
Helpful
Report abuse

Gwen
VINE VOICE
5.0 out of 5 stars Sneaky kids
Reviewed in the United States on May 30, 2017
Verified Purchase
I have been waiting for this book and I was not disappointed.
All the action, drama, suspense, family dysfunction, and intrigue from The Mountain King carried over to book 2.
Serephone took up the mantle of figuring out who paid Ruthus Adjrius to cause trouble in their town.
She tried to lie low after her mom's wedding before making her move.
Luckily or unluckily she has a tail in the form of her new stepbrother, Amnan.
The dragon shifter made a promise to his stepmother to keep her eldest, craziest, and deadliest daughter out of trouble.
Serephone reluctantly accepts that she must team up with Amnan, very reluctantly,
When fingers are pointed at the Fae, Serephone and Amnan find more than they bargained for.
Read more
Helpful
Report abuse

Emily C.
5.0 out of 5 stars Quirky, feisty female lead - LOVED it!
Reviewed in the United States on April 21, 2018
Verified Purchase
This novel is one of the most entertaining slow burn novels I've read in awhile!
The FMC is snarky, quirky - and almost seemingly *reacts like a sociopath. Lol. But it works! She's feisty and has a strong sense of duty to her family.
Along the way is a certain dragon who falls for her quirky ways. He is endearing, strong and knows when to step back and let his female shine. A perfect match, truly.
The romance is definitely a slow burn - more flirting in the beginning and then it slowly builds in intensity as the story progresses.
It's a beautiful tale!

My only complaint is...
Where is book 3 though??? (Insert sad face)
Read more
Helpful
Report abuse

TJ
5.0 out of 5 stars I am totally hooked on this series!
Reviewed in the United States on May 23, 2017
Verified Purchase
I am loving this series and the characters! Serephone is strong, snarky, smart, and loyal, but her stubborness can come back to bite her in the butt. Amnan was not what I expected at all. He was so patient with Sere and all of her hangups. I thought he was going to come off as a totally alpha male character, but he surprised me with his slow persuation and pursuit of Sere. Not the ending I expected either, but all good.
Read more
One person found this helpful
Helpful
Report abuse

Kindle Customer
4.0 out of 5 stars Wasn't so into this book as in the first in series
Reviewed in the United States on June 20, 2017
Verified Purchase
I really, really liked her darlings 😊. I suppose it's hard to describe an introverted character and I imagine that Amnan was meant to be experienced as such. At least I had that feeling. And I had some trouble connecting with him and Serephone which resulted in not being able to connect wih this book as a whole. Nevertheless, the world this author is building is unique and refreshing and I'm looking forward to another one form her. To answer her question regarding spinoff series with Dawnthorne and Anissa - YES PLEASE!
Read more
Helpful
Report abuse
See all reviews

Jennifer Burbidge
5.0 out of 5 stars Brilliant book
Reviewed in the United Kingdom on June 6, 2017
Verified Purchase
Excellent follow up from the first book. Loved it
Read more
Report abuse

VirginiaDischarge
5.0 out of 5 stars Th Silver Spider
Reviewed in Canada on May 30, 2017
Verified Purchase
After reading book this first book in this series I was so looking forward to the second s one and Miss Emma didn't disappoint.
I'm not going to spoil the story for anyone nor am I gonna bore anyone with the story line as if your reading the reviews then you've read the blurb.
This is a great second edition to a fabulous series and I look forward to more.
( I received this book free for an honest review)
Read more
One person found this helpful
Report abuse
See all reviews