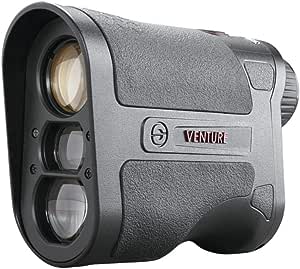 The volt 600 4 x 20mm vertical rangefinder (standard) from SIMMONS is hairsplitting-accuracy made simple. An in-view LCD display provides the exact distance to your target from 10 to 600 yards with the tap of a single button, while 4x magnification and bright, crystal clear optics bring you nose to nose with your next Trophy. Its efficient, compact vertical design and weather-resistant housing provide an unparalleled advantage that's easy to carry. Just be prepared to carry something much heavier on the hike back.

4.3 out of 5 stars
4.3 out of 5
651 global ratings
How are ratings calculated?
To calculate the overall star rating and percentage breakdown by star, we don’t use a simple average. Instead, our system considers things like how recent a review is and if the reviewer bought the item on Amazon. It also analyzes reviews to verify trustworthiness.

This range finder does not have a backlight so if it is dusk or dawn it is difficult to read the yardage marker (since the font is black). However, the rangefinder does work at dusk or dawn so if you have something with light coloring (a corn pile or something) to contrast with you will still be able to read the yardage (the yardage stays on the screen for a couple of seconds so you can range something dark and then swivel to a contrasting color and read the numbers).

It was accurate +/- 1 yd up to 65 yds (that's the max distance I tested because I'm not a good enough shot to shoot any further than that with a bow). Many reviews state that this will not range deer up to 600 yds...that is TRUE...but this range finder isn't meant to range deer up to 600 yds. Look at the photo I attached and you will see that this product is only rated at 200 yds for deer ranging. I'm not sure why this isn't made clear on this page but this range finder won't work for long-distance rifle hunting or golf. And honestly, if you are attempting to shoot deer at 400-600 yds then you should probably invest in higher end range finder. This isn't intended to be a top of the line range finder. This is a budget range finder that works really well for bow hunting.
Read more

D. Stamper
1.0 out of 5 stars Will not read most ranges even at bow hunting distances
Reviewed in the United States on January 20, 2020
Verified Purchase
I bought this for bow hunting but was very disappointed...IF you have a tree with light colored bark, AND it within 40-50 yards,, you should get a reading but in most cases it will not read in southern deer woods. Forget about rifle range or shooting lane situations. Its useless! Hunting with a friend in box stands that have shots that could be up to 300 yards, nothing would read other than the one I got due to a white bucket that had been dropped off about !40 yards but was unable to range anything else. Tree trunks, clumps a grass, stumps, nothing works very well.. We don't have white bark trees here and from what i can tell, white is the only thing it will see. Wish I didn't buy this cheap one.......
Read more
7 people found this helpful
Helpful
Comment Report abuse

Justin B.
5.0 out of 5 stars A great rangefinder at an even better price point.
Reviewed in the United States on May 16, 2017
Verified Purchase
I've been looking for a new rangefinder for bowhunting for some time now. I have looked at many different brands in stores and played around with a few that belong to friends of mine, all in the $200+ price range. I didn't want to skimp because I wanted something that would work, work well, and last a long time. After deciding against a $230 model in a sporting goods store, I got on Amazon to shop around. I found this for almost exactly $100 and, after reading reviews, thought I'd give it a shot and save some money. If it didn't work well I could always return it.
Much to my surprise, I have found nothing wrong with it. Now, it isn't the most powerful rangefinder out there, but I am still giving it 5 stars because not only does it do everything it was advertised to do, it does them at a significantly lower price than most others in its class. I knew how far it could range certain objects when I bought it, and it does exactly what it says it will. That's worthy of 5 stars. After a few days of playing around with it almost non-stop, the following are my findings.

First thing I noticed was anything under 5 yards will not get a reading. Again, it said this in the description so I was expecting it. That is fine; I don't need it for things within reaching distance.
Before testing it, I carefully measured 20 yards and placed my Archery target. Upon using the rangefinder, I got a reading of exactly 20 yards. Awesome. I have since set up a spot for the target at 10 yard intervals to 60 yards. With the 4x magnification I can loose an arrow and use the rangefinder to get a better view of where it hit. That's also nice. I am fine with 4x, although some folks may want more.
The rangefinder itself is small and compact, weighing almost nothing. It fits easily in my hand and is comfortable to hold. Build quality is great. Nothing flimsy or cheap feeling. The battery door is held on by a small flathead screw, easily unscrewed with a key, butter knife, or even, dare I say, a screwdriver.
With farther objects, holding in the button for a longer period is required. About a full second rather than just a simple quick click. I have ranged out to 400 yards with no problems just on trees and houses. I would have went farther, but that was as much room as I have had so far and for bowhunting I won't need that much. Maybe 80 yards at the most, but more reasonably 50 or 60.
The Tilt technology is also a nice feature, especially at the price point this is at. Many other, more pricey models do not have this feature, so I am very pleased with this.
There is also a batter level indicator in the viewing picture, which is convenient. I thought this was something worth mentioning because it could be a selling point for some.
There is really not much more to say about it. It tells you how far away an object is and tells you the true horizontal distance if you're at an angle with Tilt. For a hundred bucks this is one of the best rangefinders you can find. I can wear it on my belt in the nice case it comes in, or attach a lanyard (not included) to wear it around my neck while hunting. It is compact and extremely lightweight, making it almost nothing to pack around. All in all I am very satisfied with my purchase. I highly recommend this rangefinder to anyone, especially if you want to save some money. You don't miss out on quality with this.
Read more
28 people found this helpful
Helpful
Comment Report abuse

T. Murray
1.0 out of 5 stars Cheap hard plastic casing will not withstand a drop
Reviewed in the United States on November 30, 2018
Style Name: VoltSize: StandardVerified Purchase
I returned this item due to the very thin and cheap plastic housing. It also did not seem to register objects over 200 yards. I was so disappointing with this after going through so many reviews. I guess I expected a better quality product from this company but this is clearly a money grab for buy the company name. There are only two pieces of rubber on this item. The button to get the range and the eye piece. The "rubber looking" grip at the top is hard plastic made to look like a rubber grip. It is not.
I returned this and replaced with Halo XR700-8 700 Yard Laser Range Finder. You can see my review of it on it's page, but wow! 100% different and what I'd expect for a rangefinder. Beware of the Simmons . . . if it was $20, then maybe but it feels like the kids plastic toys.
Read more
8 people found this helpful
Helpful
Comment Report abuse
See all reviews

A. Zacharias
5.0 out of 5 stars Great value
Reviewed in Canada on December 29, 2016
Style Name: VoltSize: StandardVerified Purchase
This product works exactly as advertised. It's range is right around what's listed and it seems to be accurate so far. If you are only shooting up to 200 or 250 yards then this is an excellent value. I purchased this mainly for bow and muzzle loader hunting so this was perfect for me.
Read more
One person found this helpful
Report abuse

Amazon Customer
4.0 out of 5 stars Works well for target shooting.
Reviewed in Canada on September 20, 2018
Style Name: VoltSize: StandardVerified Purchase
Works decently for getting solid target distances, it becomes difficult for small targets beyond 120yds. I'm good with it though for plinking and rifle targets. Haven't used on a golf course yet.
Read more
Report abuse

JRC14
5.0 out of 5 stars Not intended for Bow hunting
Reviewed in Canada on August 19, 2019
Style Name: VoltSize: StandardVerified Purchase
Good quality. If you’re going to hunt from the a tree stand or if there is any deviation in the land, this is not what you need. Price is hard to beat
Read more
Report abuse