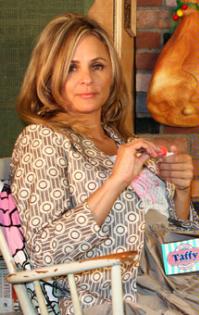 In her follow-up to the best-selling I Like You (2006), Sedaris once again invites us all to remember the “good old days” with her off-the-wall crafting and entertaining suggestions. “Did you know that inside your featureless well-worn husk is a creative you?” she asks. No doubt drawing on and making light of the current economic atmosphere, she notes, “Being poor is a wonderful motivation to be creative”; and most crafts are made with found or salvaged materials. More a vehicle for Sedaris’ knack for farce and costume than a real how-to guide (unless the formula for a “wizard duck costume” marks the realization of your wildest dreams), it nevertheless contains a few useful facts, ideas, and recipes. The true joy of this book lies in its hilarious and amazingly well-styled photo spreads, many featuring Sedaris in one of her uncanny disguises, including a teenager, an elderly shut-in, and Jesus. She devotes equal time to instruction on making homemade sausage, gift-giving, crafting safety, and lovemaking (aka “fornicrafting”). Those looking to make conventional crafts, obviously, should look elsewhere. Everyone else should sit down, have a laugh, and make your very own bean-and-leaf James Brown mosaic. The author and her brother have a considerable following among hip readers of humor, and the appeal of this book will certainly transcend the world of crafters. --Annie Bostrom

Sedaris often defies description. So does her book, SIMPLE TIMES, a hyperkinetic hodgepodge of "Crafts for Poor People" celebrating traditional American handicrafts, as well as diversions like keeping pet rabbits and making mint juleps. ...the book's sheer visual exuberance and wide scope make it obvious that Sedaris is a dedicated follower of the pipe-cleaner arts. While SIMPLE TIMES may not be for the dour D.I.Y.-er to whom crafting is a competitive sport, it has strong potential as a gift for anyone who's ever collected hats crocheted together, or Barbie dolls in knitted antebellum dresses designed to cover an extra roll of toilet paper - or simply for fans of Amy Sedaris and her idiosyncratic sense of humor.
―The New York Times Book Review

"If there was any doubt that Amy Sedaris is a kookier, kitschier version of Martha Stewart in the four years since the release of her best-selling, "I Like You: Hospitality Under the Influence," get out your Popsicle sticks, toupee tape and clamshells. Sedaris proves her place as a domestic maven for today's irony-loving do-it-yourselfers with her latest book. "Simple Times" is steeped in '70s campiness, with a youthful, can-do attitude walking through an extensive list of projects, neatly indexed in the back, from Acorn Crafts to Macaroni Alien Mask and Yesterday's Newspaper Scuffs. "Simple Times" is an ideal gift for the crafter who has crafted everything."
―The Associated Press

"The funny new book we're loving . . . Had us cracking up from the first page . . .The entire guide is written in that laugh-out-loud style, making it a fun read even for those who have no interest in crafting. But for people who are into crafting, the book is a gold mine of ideas."―Cosmopolitan.com

"Will leave readers in stitches . . . Her hilarious and hilariously illustrated guide has sections on crafting while angry, crafting for the criminally insane and crafting while amped up on amphetamines."
―The Boston Herald

"In step with her hilarious how-to debut . . . provides a jolt of laughter that anyone can use in simple times like these."
―Instinct Magazine

"In this laugh-out-loud book, Amy Sedaris, one of the funniest humans on the planet, confronts the hard-hitting craft questions that other books refuse to even acknowledge . . . With the hectic holiday season almost upon us, this nifty book could be your lifeboat to sanity, or maybe not. Regardless, it is fun and every bit as amusing as Amy's previous bestseller."
―The Tucson Citizen

Amy Sedaris has appeared in several movies and television shows, and, with Paul Dinello and Stephen Colbert, is a co-author of the novel Wigfield. She also co-wrote Strangers with Candy, the hit show on Comedy Central. She lives in Manhattan.
Read more

4.5 out of 5 stars
4.5 out of 5
292 global ratings
How are ratings calculated?
To calculate the overall star rating and percentage breakdown by star, we don’t use a simple average. Instead, our system considers things like how recent a review is and if the reviewer bought the item on Amazon. It also analyzes reviews to verify trustworthiness.
Top reviews

Karl Krotke
5.0 out of 5 stars Great read
Reviewed in the United States on October 19, 2017
Verified Purchase
Bought this as a gift. If you like Amy Sedaris, you will enjoy this read. If you don't know who she is, buy this because it's funny. If you don't like Amy Sedaris maybe there is something wrong with you- she is hilarious.
Read more
7 people found this helpful
Helpful
Report abuse

Genevieve Terblanche
5.0 out of 5 stars The format is 100% crafting guide, the content is 100% absurd
Reviewed in the United States on March 5, 2018
Verified Purchase
This is very much in the spirit of Amy Sedaris's online show At Home With Amy Sedaris. The biggest joy is the contrast between the format of a familiar craft guide from the 70s with the serious, authoritative writing --- and the absurd nature of the craft projects and inept execution. It's lavishly and lovingly illustrated with photos of tacky recycled bottlecaps, suspicious strips of burlap and lurking acorns, and contains frighting suggestions about what to do with same. For the Pinterest Fail in your heart.
Read more
4 people found this helpful
Helpful
Report abuse

Melissa De Alba
4.0 out of 5 stars Hilarious, but....
Reviewed in the United States on May 8, 2013
Verified Purchase
If you are looking for an actual craft book, this is not one. I thought this would have actual cute crafts to work on but it is really just funny commentary by Amy Sedaris and Paul Dinello. I'm a big fan of Amy Sedaris, so if you love her humor-which is not for everyone- you will love this book. It's packed with pictures and drawings which are awesome, and of course they are hilarious but if you're looking to do crafts, this doesn't offer much at all. For example, "Love Chimes" for your lover were a bunch of rusty nails strung together! I have the book in my living room and people love to flip through it and laugh - or wonder what kind of weirdo I am. :)
Read more
8 people found this helpful
Helpful
Report abuse

gracie
5.0 out of 5 stars She is very funny!
Reviewed in the United States on January 1, 2017
Verified Purchase
She is sooo funny, and has the same humor as her brother, David Sedaris. But in a different style...it can be enjoyed by simply browsing through it. You wouldn't really sit down and read it cover to cover.
The quality of the pages is really high, so it's fun to page through it. I was surprised by this, considering how cheap it was.
She has another book too, which I've also purchased. They are equally great.
Read more
Helpful
Report abuse

BanAnna
5.0 out of 5 stars Laughed so hard I peed
Reviewed in the United States on December 8, 2010
Verified Purchase
Seriously, I laughed so hard I peed, probably because it is a combination of the most inane things that I sometimes think and am shocked to see someone else thought too and the fond memories I have of awful 20 year old crafting books my crazy Aunt Caro use to send me every year for Christmas. Love you Aunt Caro! I bought it for my assistant because of our mutual love of Amy's brother, David Sedaris' writing and her love of crafting. When I got home I started to look through it and then read it cover to cover and laughed, cried and peed, the entire time. This can be a book for those who take crafting and themselves serious, but never at the same time and never so much that they can't laugh at either. Just when you think that she has out done herself she has something more outlandish on the very next page. I can't say that after reading this I plan to go out and make any of the crafts she has suggested except for Moses' Comb Sheath! Thank you Amy for making me pee my pants!
Read more
6 people found this helpful
Helpful
Report abuse

S. Zimmerman
5.0 out of 5 stars Craft-tastic
Reviewed in the United States on March 28, 2011
Verified Purchase
I pulled this book out of it's mailer face down, so the first thing I saw was Amy Sedaris in a crafted indian squaw outfit standing in front of a redskin habitat, holding a pipe of some kind.. I literally was laughing before I even opened the book! What amazes me is the level of detail in the photos! There are very subtle elements that are full on 100% Sedaris, and keep me rolling as I find something new every time I look. I don't know how she does it, but I love it. She can be the envy of any burned out elementary school teacher and a sadistic comedian simultaneously. Bipolar entertainment at its finest.
Read more
10 people found this helpful
Helpful
Report abuse

John
5.0 out of 5 stars Great book.
Reviewed in the United States on October 5, 2017
Verified Purchase
Amy sedaris. What can you say? She's hilarious. She's a beautiful women. She's not comfortable in this world. What genius really is?
Read more
4 people found this helpful
Helpful
Report abuse
See all reviews

Lydia
5.0 out of 5 stars Love!
Reviewed in the United Kingdom on November 1, 2019
Verified Purchase
Amy is a crafter who enjoys the process of crafting and doesn’t worry to much about the end result. She expresses her creativity without being scared of what other will think. If like me, you’re trying not to be a square or a perfectionist, this is definitely worth a read. Whenever I feel as though I’m taking creativity too seriously , I pick up this book. The one fault I do have, is that I would like to make the wig/hair lamp but the supplies are too expensive and I am too poor.
Read more
Report abuse

PW
5.0 out of 5 stars Hilarious and bizarre
Reviewed in the United Kingdom on January 11, 2019
Verified Purchase
Full of irreverent and inappropriate humor, with bizarre "recipes" and hilarious photos. Yes, this is NOT a serious crafting book, as some people in the reviews have observably discovered. It will make you laugh, though!
Read more
Report abuse

Page 1 of 1 Start overPage 1 of 1
Previous page
Next page
Pages with related products. See and discover other items: photos of people