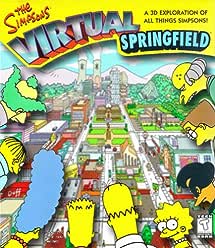 In Virtual Springfield, the metropolis throbs from the diligent employees at the nuclear plant to the all-night wonders of the Kwik-E-Mart and the eager students of Springfield Elementary. Explore every nook and cranny with over 50 locations. Listen to original cast members such as Phil Hartman, Nancy Cartwright, Dan Castellaneta, Pamela Hayden, and more. In addition, view all-new Itchy and Scratchy cartoons at Krustylu Studios, attend the premier of the latest McBain movie at the Aztec theatre, and even channel-surf through Homer's favorite TV shows.

It's finally here. Those fluffy clouds, those rolling hills, those...nuclear cooling towers. Rip through the package faster than Barney sucks up a sixer of Duff, pop in the CD-ROM with the vigor of Homer devouring his morning donut, and discover a disc that would make even Ned Flanders dang-diddly-darn disappointed.

The gist of the CD is to wander around Springfield visiting about a dozen Simpsons sights - such as their church and house. Collect things and play games along the way. Have a good time.

But it's not going to happen. Movement around town is restricted to block by block. See something interesting along the way? Too bad. However, take a nice long pause at every corner, where the game stalls for 10 seconds to load from the disc. Meandering from site to site sometimes requires walking a dozen or more blocks - stopping and loading, stopping and loading.

Granted, once there, the actual places are a little better. The graphics are dead-on, and the jokes are OK. But after the material runs, you're back on the stop-and-go path. As Homer would say, "Lousy no-good rotten disc."

Mark: This Springfield consists mostly of facades and false fronts. There's no there there.

Judy: I was looking forward to really getting to traipse about Springfield - and have been left on the bus. I am saddened even further by the gravely missed opportunity to create wonderfulness. Shame on you, Fox.

Joe: The 23-page introductory book was hilarious, which made the disc all the less bearable. As a resident of Springfield, Illinois, the reputed home of the Simpsons, I'm having a cow, man.

3.0 out of 5 stars
3 out of 5
18 customer ratings
How does Amazon calculate star ratings?
Amazon calculates a product’s star ratings based on a machine learned model instead of a raw data average. The model takes into account factors including the age of a rating, whether the ratings are from verified purchasers, and factors that establish reviewer trustworthiness.
Top Reviews

Tim Wesley
5.0 out of 5 stars Great computer game to master
Reviewed in the United States on August 27, 2014
Verified Purchase
This is an awesome computer game, one with tough clues but can be mastered if you know what I mean. I greatly recommend it, as well as seeing inside buildings of Springfield you don't get much of a chance to see.
Read more
Helpful
Comment Report abuse

William Hoffknecht
3.0 out of 5 stars Ehh...
Reviewed in the United States on August 19, 2008
Verified Purchase
Not that cool. This is an old slow program that is kind of fun for a minute, but really is not that great. If you are a hardcore Simpsons fan then it is kind of cool for the Itchy and Scratchy cartoons and a few other assorted things, but really not that great.

It is worth checking out for a couple of bucks, but not much more than that.

ksnod
3.0 out of 5 stars ok for simpsons fans
Reviewed in the United States on August 15, 2013
Verified Purchase
i got this because i am a big simpsons fan but since its a older game it can barely be played on newer computers
Read more
Helpful
Comment Report abuse

Jimmy R
5.0 out of 5 stars WILL NO LONGER INSTALL ON WINDOWS 7 AND HIGHER!
Reviewed in the United States on June 28, 2014
The 5 star rating was for the game/program itself.. I bought this when it came out in 1997, for my now ex.. I had it after the break-up, and installed it on a few of my computers over the years. The last was on my Mac 0S9 and a computer with an XP version of Windows. Since then I had a few other computers, and had to reinstall hard drives after crashes. I recently went to reinstall the disc on my current SONY Vaio Windows 7 laptop, and after hitting install, it said the Active X was no longer supported, which means, the game is now junk. Kind of like my ex and I (Ha).

So, for anyone attempting to install this on Windows 7 or higher, be warned before you buy this and attempt to take a stroll down memory lane, or at least be warned.. It's a shame, 'cause it was a great little item. This is an item that should not be subject to different computer's operating systems. If it worked on Windows 95-XP, it should still work it later versions. I know a few other games that are defunct like this one..Sim City 2000 comes to mind; but I think that one can still be purchased as an updated version..but not 100% sure.
Read more
Helpful
Comment Report abuse

foxpresident24
4.0 out of 5 stars The Simpsons Virtual Springfield
Reviewed in the United States on August 15, 2014
In the beginning, I found thus game rather frustrating as to reach the locations in Springfield, you have to use a terrible navigation system. But with the help of a few cheats, courtesy of my friend, the Internet, I was able to forget the navigation system altogether. Once I got the hang of that, I had the game finished in two days. It is less about gameplay here and more about learning the ins and outs of Springfield. This game is only for hardcore Simpsons fans, such as myself, as there are many references from the show your average Joe won't understand. A good game for video game challenged people, such as I, but if you are looking for a long lasting game, I recommend the more recent The Simpsons Game, available for a multitude of different systems including Nintendo DS and Wii.
Read more
Helpful
Comment Report abuse

Inspector Gadget
2.0 out of 5 stars Not much to do
Reviewed in the United States on June 2, 2002
All you really do in this game is look around Springfield and run into the occasional character. I finished the entire thing in less than 2 hours. Plus it is not very vivid or deep. You can only visit 2 classrooms in the Springfield elementary school, there is only 1 angle of Moe's bar etc. All you really do is LOOK at these locations that we are already familiar with and have the tiniest little bit of interaction with them. Plus the geography of Springfield in this game is not the same as the TV show. Which is also inconsistent in it's placing of many "sets". Moe's Bar has been in many different places for example. But, then again, in the garbageman episode, the town was moved to another site. Perhaps this is where it got all shuffled up.

There are a few little (and I mean little) games included. One of the main games is to simply find hidden baseball cards. A ploy to trick into clicking on the screen and revealing slight animation.

In total there is just under 25 minutes worth of animation here and it is cool that the original cast provided the voices. But unless you are a die hard Simpsons fan then I would leave this game be. Definitely only for younger kids.
Read more
11 people found this helpful
Helpful
Comment Report abuse

Luis Hernandez
4.0 out of 5 stars The Wonderful World of the Simpsons Alive on Your PC!
Reviewed in the United States on September 29, 2000
As a die-hard fan of the "Simpsons", I love anything and everything that has their image on them. After purchasing the rather disappointing "Simpsons Cartoon Studio" I decided to purchase "Virtual Springfield" and see how much more different it was.
What I got was an incredible game that allow the user to explore the town of Springfield as if you were walking through the streets with a virtual reality helmet on. While the game features excellent graphics and sound, and plenty of humorous characters and scenarios, I was only disappointed that the game manual wasn't too informative on how to collect items, especially the series of trading cards that are hidden throughout the town. Besides this minor fault, the game is great for adults, and it would probably be a bit difficult for young children to maneuver around the town using a mouse.
All of Springfield's humorous and wacky denizens are here, and some of the places where you can actually visit inside (e.g. the Kwik-E-Mart; Simpson's home; Flander's home) are hysterical and entertaining to the fullest extent. If you are a die-hard Simpsons' fan, then this game is for you. I only wish I could learn how to collect and use most of the items/clues that I need to complete my mission.
Read more
29 people found this helpful
Helpful
Comment Report abuse
See all reviews from the United States

Stephen McKnight
3.0 out of 5 stars Three Stars
Reviewed in the United Kingdom on November 28, 2014
Verified Purchase
was an ok game
Read more
Helpful
Sending feedback...
Thank you for your feedback.
Sorry, we failed to record your vote. Please try again
Report abuse