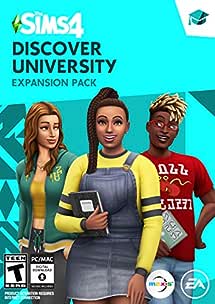 by Electronic Arts
Platform : Windows 10 |
Rated: Teen
| DRM: Origin
4.7 out of 5 stars 399 ratings
Available now.
Ships from and sold by Amazon.com Services LLC.
Note: After purchase, you can access the item in Your Games Library.
By placing your order, you agree to our Terms of Use.
This product is non-returnable and non-refundable.
Note: Currently, this item is available only to customers located in the United States.

Hit the books and show your school spirit in The Sims 4 Discover University Expansion Pack, where Sims enroll in school, explore collegiate experiences, and enjoy extracurricular activities. Take classes that set your Sims up for success in engineering, education, or law careers. Discover robotics and ping-pong, plus make some mischief pulling pranks against the rival school. Study hard, sleep in, and high-five the school mascot – just make sure to keep those grades up

4.7 out of 5 stars
4.7 out of 5
399 customer ratings
How does Amazon calculate star ratings?
Amazon calculates a product’s star ratings based on a machine learned model instead of a raw data average. The model takes into account factors including the age of a rating, whether the ratings are from verified purchasers, and factors that establish reviewer trustworthiness.
Top Reviews

SSD
5.0 out of 5 stars Game-changing (literally) expansion!
Reviewed in the United States on November 18, 2019
Platform: PC Online Game CodeEdition: Discover UniversityVerified Purchase
If you're a Sims 4 fan that wants something to *very* nicely complement Parenthood and Seasons both, definitely look no further than Discovery University! I feel like I haven't even scratched the surface of all the many options in this pack—from how many classes your Sim will take each term (1 per week), to (finally!) biking anywhere in the worlds, to whether or not to have roommates (which may or may not help keep the place clean!) to deciding to investigative that mysterious Secret Society...There is a lot to cover that you won't get easily bored anytime soon!

Personally, I thankfully haven't encountered too much in the way of bugs, and happily EA has been pretty prompt in fixing some especially annoying issues in their recent Patch Updates, so I'm almost certain we'll be getting fixes in December.

Highly recommended pack for fans that want to help (or hurt) their Sims to succeed (or fail) in their future career of choice post-graduation!

Anjiya Lakhani
5.0 out of 5 stars Best pack ever
Reviewed in the United States on November 17, 2019
Platform: PC Online Game CodeEdition: Discover UniversityVerified Purchase
Discover University is sooooo much fun. It adds a ton to the game and is the best expansion pack yet.
Read more
10 people found this helpful
Helpful
Comment Report abuse

Michelle Louise
3.0 out of 5 stars Worst version of University to date
Reviewed in the United States on February 2, 2020
Platform: PC Online Game CodeEdition: Discover UniversityVerified Purchase
This game is not made for generational multi-household play. Not only does it take way too long, but to get the full university experience ie. live on campus you have to abandon your other family members at home for a minimum of 3 weeks of a lifestage. Seriously. This is the worst version of the university experience. Even the sims 2 and 3 did this better.
Read more
5 people found this helpful
Helpful
Comment Report abuse

cw
3.0 out of 5 stars It’s Okay
Reviewed in the United States on February 5, 2020
Platform: PC Online Game CodeEdition: Discover UniversityVerified Purchase
Discover University was pretty challenging for me as I had multiple Sims going through. I honestly feel like there isn’t very much to do in this expansion except get stressed. I’ve only used it one time but the best parts of the pack are the extras like the new jobs, CAS items, and the new world. I do think it could be more enjoyable for players that might not be me though haha
Read more
3 people found this helpful
Helpful
Comment Report abuse

Popsicles
1.0 out of 5 stars ELECTRONIC ARTS & SOME PLAYERS RACIST, DISCRIMINATION, ILLEGAL HACKING, BULLYING, HATE
Reviewed in the United States on August 1, 2020
Platform: PC Online Game CodeEdition: Discover UniversityVerified Purchase
I need to report what some EA Team & Sim players have done to me over the years. First I have had six accounts with six sets of games. (Amazon can verify this by our purchases). Some of EA's Team & Players are RACIST because of game data they collected from me about my hubby being Latino & me being White, they BULLIED, HATED & were *ABUSIVELY RACIST TO ME* bc of this INFO they got from the game *THIS IS RACISM!!!* Be sure to un-tick the share data box bc if your game is acting strange you probably have been hacked or as EA say's "ENHANCED" NOT! They ABUSE IT! EA has hacked all SIX of MY GAMES & Accounts, corrupting the games, changing sim names, changing residential lots to RESTAURANTS. Why Restaurants bc in EA SIM LANGUAGE Restaurant basically means "TO RANT" abt something BAD EA wants me to KNOW, like turning me from a GIRL PLAYER TO A MAN PLAYER, WHY??? EA HAS DESTROYED SIX SETS OF SIM GAMES thru *HACKING* & DESTROYING MY GAME PROPERTY!! BC they JUDGE, BULLY, HATE, & HACK. If they can't get in during a Down Load, EA ILLEGALLY "BUMPS" me offline while they ILLEGALLY HACK ME. On my last set of Sims 4 games, EA ILLEGALLY HACKED a DEATH WOOHOO into my game, that when the deed was done it KILLED MY CHILDREN!! WHY???? EA TEAM & PLAYERS HAVE USED PROFOUND DISCRIMINATION AGAINST ME BC OF A DISABILITY THEY THINK THEY KNOW OF BC of the DEROGATORY DISCRIMINATION, ABUSIVE TREATMENT, BULLYING & HATE TOWARDS ME BC OF OF A DISABILITY I DO HAVE! *ELECTRONIC ARTS* VIOLATED MY PRIVACY and GAVE OUT MY NAME & IP, So I got HACKED on other PLATFORMS abt BEING HACKED INTO A MAN in SIMS 4. My Personal PC was HACKED & EA & SIM PLAYERS were PROFOUNDLY CRUEL & ABUSIVE to me abt being HACKED, INTERRACIAL RELATIONSHIP & DISABILITY **DISCRIMINATION, RACISM & HATE AGAIN!!!** Then The HACKER WIPED my PC CLEAN of all the HATE!! I dis not have a recent back up so I LOST MANY PERSONAL THINGS THAT DAY! EA & SIM PLAYERS HAVE TERRORIZED ME. The HACKER said to me "YOU SHOULD JUST GO KILL YOURSELF" among all the other HATEFUL ABUSIVE WORDS!! Also in my SIMS 4 the HACK has destroyed my SIMS desire to aspire at anything, so basically they do NOTHING, EXCEPT BE A MAN!! WHY?? I also Reported SIM PLAYERS for player violations in EA's RULES, YOU know what EA DID?? *NOTHING TO those SADISTIC SIM PLAYERS, THEN TO PUNISH ME MORE FOR UNKNOWN REASONS, EA Took MY NEWEST SET OF GAMES AND NEW ACCT and HACKED and DESTROYED THE LAST SET OF GAMES I WILL EVER BUY FROM RACISTS, PROFOUND HATE, DISCRIMINATION, ABUSE FROM SIM PLAYER BULLIES, ILLEGAL HACKING & BUMPING OFFLINE FROM ELECTRONIC ARTS. I don't know how to tell anyone WHY I became a TARGET, except that possibly my reactions to RACISM & DISCRIMINATION by EA & SIM PLAYERS over the years has provided them with an SOMETHING I HEARD from ANONYMOUS SOURCE IS COMMON they ATTACK FOR THE SICK THRILL an Individual based upon RACISM & DISCRIMINATION. ELECTRONIC ARTS is UNPROFESSIONAL, UNETHICAL, UNTRUTHFUL & MOSTLY an ABOMINATION to HUMAN RIGHTS, PRIVACY & JUST BEING HUMAN. I have REPORTED ELECTRONIC ARTS & THE SIM PLAYERS to INTERNET CRIME BUREAU in over 10 REPORTS with 50 PAGES of THEIR CRIMINAL, ILLEGAL & UNETHICAL CONDUCT.
Read more
Helpful
Comment Report abuse

Amazon Customer
5.0 out of 5 stars Don't buy code from Best Buy!
Reviewed in the United States on December 4, 2019
Platform: PC Online Game CodeEdition: Discover UniversityVerified Purchase
Code never arrived from Best Buy, so I decided to purchase one from Amazon instead. The code arrived as soon as I paid for it, and didn't have any issues at all installing. The game itself could use more features like sororities and frats instead of just having gender restricted dorms. The update made my game crash a few times before the hot fix update. Overall, a cool expansion that definitely adds more gameplay for young adult Sims.
Read more
3 people found this helpful
Helpful
Comment Report abuse
See all reviews from the United States