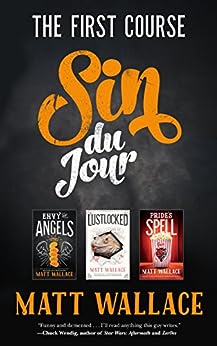 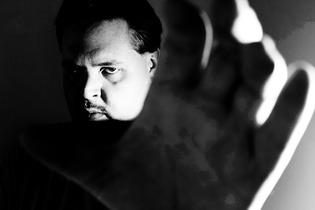 Josh Mauthe
5.0 out of 5 stars A gloriously anarchic, splattery, imaginative, and just plain FUN series about cooking, food, and demons
Reviewed in the United States on April 10, 2018
Verified Purchase
A few weeks ago, I read - and sang the praises of - Envy of Angels, the first book in Matt Wallace's horror/foodie/anarchic Sin du Jour series. The story of a kitchen that caters to supernatural entities ranging from the demonic to the fantastical, Envy of Angels was gloriously bonkers, somehow managing to deliver splattery horror, lots of dark comedy, and some truly surreal moments that I wouldn't dare spoil for fear of ruining the fun of the book. That it did all this in a novella-length story was all the more impressive; it was satisfying, fun, and went down fast. So I picked up The First Course, which contains the first three entries in the series - Envy of Angels, Lustlocked, and Pride's Spell - as well as a short story entitled "Small Wars", which seems to be an excised story line from Lustlocked. My thought, at the time, is that I would spread them out over a few weeks, reading the second novella and then waiting for a bit before taking on the third.

That didn't last very long. Which, mind you, is testament to Wallace's skill; yes, Lustlocked ends on a brutal cliffhanger, but more than that, I just wanted more of this world - more chaos, more horror, more insanity, and more fun. And, without getting too specific, I'm glad I did all three of these so close together; the first three volumes of the series end up comprising a pretty satisfying trilogy in ways I didn't expect, even as they left me excited that there are four more entries in the series still waiting for me to read.

Over the course of the novellas, Wallace proves that Envy of Angels, with its glorious tale of angels, chicken nuggets, and demon wars, was no fluke, finding new ways to deliver gleeful anarchy and chaos. In Lustlocked, this kitchen crew caters a wedding for The Goblin King (who turns out to be, well, yes, that Goblin King), only to have someone sneak some extra ingredients into the dishes that have a most, um, unusual effect on the patrons. How this results in a malevolent Droopy Dog hologram, to say nothing of all the lizards, well, that's for the readers to see. And Pride's Spell is equally (and wonderfully) bonkers, delivering a tale of ancient Hollywood executives feeding on interns, a most unexpected team of assassins, and a long-simmering revenge plan that certainly plays into the series' taste for excess.

But for all of the insanity, somehow, Wallace makes it all work, turning what could easily feel excessive or exhausting into a wild ride whose anarchy is instead one of its greatest assets. The novella length of each volume helps this - Wallace keeps his stories lean and his plotting tighter than you might expect, delivering satisfying arcs in brief packages. Beyond that, though, he brings his characters to life by investing us in this world and the success of the catering company, always giving every insane thing real stakes that are easy to wrap our heads around.

The end result is a true joy to read - it's funny, entertaining, splattery, unpredictable, but more than anything else, it's fun, which is something that not every book remembers to be. The characters keep me coming back, but the real star is the complicated, bewildering, surprising world that Wallace is slowly building with each new volume, creating his own gloriously off-kilter reality just below the surface of ours. And I'm quite excited to get back to it soon in volume four.
Read more
One person found this helpful
Helpful
Report abuse

Sarah T
5.0 out of 5 stars Awesome ridiculous wonderful ride
Reviewed in the United States on May 13, 2019
Verified Purchase
This is a great story, ridiculous turns that make total sense in the context, great characterization, really enjoyable and I can’t recommend it enough. I won’t tell you anything more than that because I don’t want to spoil it. Buy it, it’s great!
Read more
Helpful
Report abuse

I must admit I did not expect much of this, not having heard of the series nor the author and being a bit sceptical about the foodie setting.

However, this was a surprisingly good read. well written, interesting characters with development. The foodie-angle is refreshing and not overdone, what is there fits naturally in the flow of the narrative. A plus from me.

I bought all the others books in the series after reading this.
Read more
Helpful
Report abuse

Nucleomante
4.0 out of 5 stars Sin du Jour FTW!
Reviewed in the United States on March 16, 2017
Verified Purchase
Having the first three books of the Sin du jour series is a great way to to start. Im eager to read the remaining books, each story is very enjoyable and the continuity makes it great. Loved it. I totally recommend this books and the price is kind of a bargain you shouldn't miss.
Read more
Helpful
Report abuse

Lindsey Smith
5.0 out of 5 stars Hidden Gem
Reviewed in the United States on May 1, 2017
Verified Purchase
Found this series by accident because I found the fourth book first, loved the cover art and thought that the story sounded fun. I was not disappointed. A wild ride with a few parts that don't make too much sense yet but an awesome cast. LOVE that Tor released the first three books this way and hope they do the same with the subsequent volumes. This format is perfect for binge reading!
Read more
Helpful
Report abuse

Ray
5.0 out of 5 stars Doesn't fill you up
Reviewed in the United States on November 10, 2017
Verified Purchase
with empty calories like other books and at six dollars and change you'd be doing yourself a deservice by not picking this up.
Read more
Helpful
Report abuse
See all reviews

Thomas Tamblyn
5.0 out of 5 stars Description inaccurate.
Reviewed in the United Kingdom on February 11, 2018
Verified Purchase
Excellent books, but be aware that the product description is currently inaccurate: this collection does not contain the short story "Small Wars".

Robin Alan
4.0 out of 5 stars Sin du Jour a Tasty Treat
Reviewed in Canada on May 24, 2017
Verified Purchase
Combining gastronomy and demonology these books are a lot of fun. Not for the whole family though as there is a lot of swearing and some pretty grotesque scenes. Winces and grins come equally fast throughout. Humour, violence, monsters and mayhem abound. Especially fun for those who have been, or are, working in the food industry. Definitely no Ramsey's in these stories. Bon appetit!
Read more
One person found this helpful
Report abuse
See all reviews