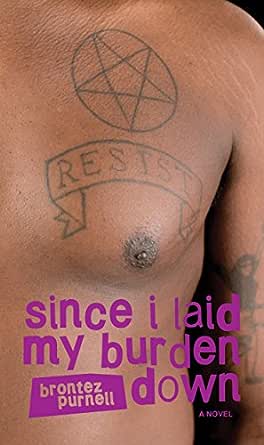 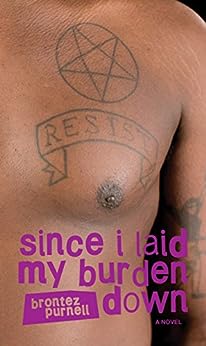 Since I Laid My Burden Down Kindle Edition

"One of the most unflinching and bone-true things you’ll read all year." —Fiction Advocate

"An antidote to the rigamarole of gay lit." —Mask magazine

"A complex. . .look at one man’s experience of being black, queer, smart, soft, tough, artistic, and constantly in motion between rural and urban cultures." —Kirkus Reviews

"Performance artist Purnell beautifully captures a personality through introspection and memory in this slim novel. . . . a compelling portrait of a particular disaffected kind of gay youth caught between religion, culture, and desire." —Publishers Weekly

“It’s a true novel, chaptered, and bound, that not only holds its own as queer literature, with its unapologetically misanthropic narrative, but also expands upon it.” —San Francisco Chronicle

"Slim yet potently realized, with a lot to ponder." —The Bay Area Reporter

"An artist of many talents, from writing to dance, Purnell shows in his debut novel a strong control of language coupled with a willingness to take risks." —Rain Taxi

"Told like a punk rock Capote, this story of returning home has personality for days."—BKLYN BookMatch: Our 50 Favorite Books from 2017

“This is the book you fall asleep reading and wake up excited to get back to. A Cult Masterpiece with so many memorable characters and phrases you’ll want to grab strangers and read paragraphs to them.” —Kathleen Hanna

“I have always admired Brontez Purnell’s writing, and this novel is his greatest achievement yet. Purnell is never careful, never evasive. He hits you with honesty, passion, painful humor and never stops.” —Mike Albo, author of Hornitio

“Brontez Purnell is foul-mouthed and evil. Be warned: this book will make you cackle out loud like you've got the Devil inside you then it will break your heart. Be careful where you read it. BUT DO READ IT.” —Justin Vivian Bond

“Since I Laid My Burden Down is a dance between grit and eloquence. With epic detail and crude truth, Brontez Purnell reminds us that the lessons of survival and love are learned through life's most fucked-up circumstances. Building bridges between tradition, ancestry, Southern punk, blackness and queerness, Brontez has written a story that helps us laugh, grieve, and breathe." —Cristy C. Road, author of Spit and Passion

“Since I Laid My Burden Down has a fearless (sometimes reckless) humor as Brontez Purnell interrogates what it means to be black, male, queer; a son, an uncle, a lover; Southern, punk, and human. An emotional tightrope walk of a book and an important American story rarely, if ever, told.” —Michelle Tea, author of Black Wave

Brontez Purnell has been publishing, performing, and curating in the Bay Area for over ten years. He is author of the cult zine Fag School, frontman for his band The Younger Lovers, and founder and choreographer of the Brontez Purnell Dance Company. Formerly a dancer with Gravy Train!!!, a queer electro indie band that gained national prominence in the mid-2000s, Purnell's other prominent artistic collaborations include his supporting role in the queer independent feature film, "I Want Your Love" (Dir. Travis Mathews, 2012).

He was a guest curator for the Berkeley Art Museum's L@TE program in 2012, awarded an invitation to the 2012 Radar Lab queer arts summer residency, honored by Out Magazine's 2012 Hot 100 List and 2013 Most Eligible Bachelors List, and most recently won the 2014 SF Bay Guardian's Goldie for Performance/Music. His previous books include one graphic novel (with illustrator Janelle Hessig) The Cruising Diaries (Gimme Action), and a novella Johnny Would You Love Me (if My Dick Were Bigger) (Rudos and Rubes).
--This text refers to the paperback edition.

4.1 out of 5 stars
4.1 out of 5
17 global ratings
How are ratings calculated?
To calculate the overall star rating and percentage breakdown by star, we don’t use a simple average. Instead, our system considers things like how recent a review is and if the reviewer bought the item on Amazon. It also analyzes reviews to verify trustworthiness.

Andre
5.0 out of 5 stars Unapologetic
Reviewed in the United States on September 25, 2019
Verified Purchase
Brontez Purnell's Since I Laid My Burden Down is unapologetically black, queer, and Southern, making for a fun, fast read. It is also refreshing and insightful for its no holds barred view of life as he experienced it. I had the pleasure to see him perform one of his stories at a storytelling event and am thrilled that he has made the transition to books. He is one of the most entertaining writers I have read recently and I look forward to reading more from him.
Read more
Helpful
Comment Report abuse

Amazon Customer
5.0 out of 5 stars Over too soon
Reviewed in the United States on March 21, 2019
Verified Purchase
This book read so easily and was so enjoyable it could have been another 200 pages and that would have been great! I really hope Mr Purnell plans to keep writing - and often!
Read more
One person found this helpful
Helpful
Comment Report abuse

Deshawn is an artist living in San Francisco. He returns to Alabama for a funeral, and flashes of his life between the two spaces appear. Family and lovers enter the narrative and disappear again. The pace is fast, though there is less emphasis on plot than on character and how these seemingly contradictory identities play out in the central character. The time frame and setting shift mostly between Alabama and San Francisco.

I loved the honesty that imbues Purnell’s writing about queer sexuality. It’s raw, it’s honest, it’s sexy. It doesn’t sanitize or uncomplicate itself for the hetero gaze. Nor does Purnell seem to uncomplicate blackness for a white gaze. I’m sure that others can speak more eloquently to that than I can.

Since I Laid My Burden Down is a highly effective book and one of my favorite books written in the past few years. I highly recommend it.

Jackson Theofore Lara
2.0 out of 5 stars Painful and brutal
Reviewed in the United States on June 28, 2020
This was a truly punishing book. The main character was sexually abused, multiple times. His family was less than heathly. And this, of course, led to a seriously broken man. Chapter after chapter was sexual abuse, parental abuse, drug abuse, self condemnation, and violence. I felt like the book was trying to beat me to beat with descriptions of this man's hell. So you fight all the way to the end of the book, mentally battered and bleeding, only to get one sentence that hints at a happy ending. Yay. So unless you like your books rough, violent, and destructive, I would give this one a pass.
Read more
Helpful
Comment Report abuse

Sonja M. Elliott
5.0 out of 5 stars GREAT READ !
Reviewed in the United States on April 14, 2018
GREAT READ! Loved it so much by page 20 that I got immediately online to order his other novel (and passed it to my daughter) ! Certainly to follow in the footsteps of Iceberg Slim, and what an honor that will be.
Read more

Sean F
5.0 out of 5 stars would love to read more of the same
Reviewed in the United States on September 6, 2017
At a glance I saw some parallels in my own life that made me look forward to this being a relatable read. What exceeded my expectations was how intimate the storytelling is, revealing a fairly harsh history so honestly and casually, in such a sharp and funny way, that I found it not at all harsh to read but fresh and delightful. Also worth noting-- it is a beautifully designed book.
Read more
Helpful
Comment Report abuse
See all reviews

David Young
4.0 out of 5 stars Not sure of this one.
Reviewed in Canada on January 24, 2020
Verified Purchase
Not sure how to write about this book. Very odd, sad, occasionally funny, sometimes bizarre?
Read more
Report abuse
See all reviews