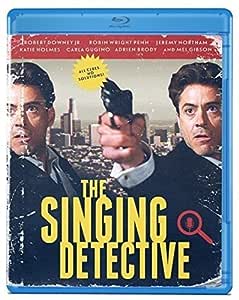 A hospitalized writer immerses himself in the fictional life of his alter ego, a singing detective.

3.6 out of 5 stars
3.6 out of 5
120 global ratings
How are ratings calculated?
To calculate the overall star rating and percentage breakdown by star, we don’t use a simple average. Instead, our system considers things like how recent a review is and if the reviewer bought the item on Amazon. It also analyzes reviews to verify trustworthiness.
Top reviews

Jane
4.0 out of 5 stars Wonderful, don't listen to the negative remarks about this great movie.
Reviewed in the United States on May 11, 2020
Verified Purchase
I was a fan of the BBC version and I think they did a great job on this movie as well. People are so used to straight plots that any movie that is unusual or different and they automatically hate it. This movie is definitely not a usual Hollywood movie and that is why I love it. The movie shows the character of Danny Dark and his disease but also his active fantasy life. The cutting between fantasy and reality was wonderfully done. The characters were amazing, great performances by all the actors and actresses. Maybe eventually people will stop acting like every movie has to be the same cookie-cutter model and true creativity can happen. This movie makes that leap and I loved every minute.
Read more
One person found this helpful
Helpful
Comment Report abuse

Fiona Webster
2.0 out of 5 stars I"m a Robert Downey Jr. fan, but this is basically unwatchable
Reviewed in the United States on January 5, 2020
Verified Purchase
I rented this on the strength of the reputation of the original Bob Hoskins version ('haven't seen it) and because of its star (I'm a fan). To do him credit, Downey Jr. does work hard in the role. But I couldn't even get halfway through it. The main character's grotesque skin disease makes him painful to watch and obscures his facial expressions. The music, not especially well-chosen or well-performed, seems to bear no relation to the plot or to the time period of "the singing detective" (it's unclear what that tale-within-a-tale is supposed to be about). The screenplay has wince-making penis humor and other gaffes. Not recommended.
Read more
Helpful
Comment Report abuse

Robert I. HedgesTop Contributor: Pets
HALL OF FAMETOP 1000 REVIEWER
1.0 out of 5 stars Tedious And Annoying, And Those Are Its Good Qualities
Reviewed in the United States on November 13, 2017
Verified Purchase
Based on a much-loved British television series, the big screen adaptation of "The Singing Detective" demonstrates all that's wrong with Hollywood. First, for a major piece of praise: the cinematography here is absolutely gorgeous. It's a beautifully shot movie, and director Keith Gordon's eye for composition is keen. Similarly, Mel Gibson as Dr. Gibbon gives a fantastic performance, though he's utterly surrounded by scenery chewing from the balance of the cast, particularly Robert Downey, Jr. as pulp fiction author Dan Dark. And that character name as embarrassing as it is symbolizes everything wrong with this film: it's so obviously wanting to pander to film noir (I'm almost surprised it wasn't released in black and white) while embracing fantasy, musicals, drama, and comedy all at the same time. It's always trying to be edgy and clever without actually being edgy or clever, and plays as one big Humphrey Bogart imitation contest.

Others have detailed the plot, so I will go sparingly on the details, but the arc of the story concerns Dark, who at the film's opening is seen barking like a dog and suffering from a horrible skin infection in a hospital. This introduces the medical subcomponent; immediately thereafter the noir gangster subcomponent is introduced with the drowning of a woman in a bathtub. Get used to these rapid fire shifts in time period (much is told in flashback) and storyline; much of this is clearly fantasy, but there is frequent deliberate blurring of fantasy and reality, and if the characters and fundamental storytelling weren't so entirely off-putting it would be effective and interesting. Instead it's merely trying.

Let's recall that the title is "The Singing Detective", so the third major film styling is the cast spontaneously and inappropriately breaking into song. The first time we see this is in Dark's hospital room when the hospital staff launch into "At The Hop". What? Why? This song has no connection to the plot and just serves to justify the word "singing" in the title. This is but the first of many songs from the 1940s and 1950s that will be crooned for no reason except as a manifestation of Dark's descent into madness. The script is not very nuanced, and the filmmakers evidently decided that Downey screaming profanities passes as witty, but it's really just boring after the first few minutes. Here the f-bomb is a lazy crutch. Dark resists the help of Dr. Gibbon, and the scenes of Dark and Gibbon are the best in the film thanks to Gibson. In the major "duh" moment of the film, Gibbon concludes that Dark doesn't like women, a point made very obvious by the various relationships he has with women throughout all subplots shown. In one of the psychoanalysis scenes the most self-revelatory line of dialogue in the movie is uttered with unexpected significance: "If this was a movie, it'd be on the cutting room floor". Indeed, I don't know why all of this wasn't left there and swept into a bin by the janitor. As a bonus, watch for the world's most grating word free association psychotherapy.

Rarely have I been so perturbed with a movie, and while I'm not against having multiple intertwining storylines per se (in skilled hands it can be a very effective technique, see "Dunkirk" for example), there isn't enough interesting material here for its 108-minute running time. Sometimes picking your most interesting story and telling it is a better call (though in fairness, I wouldn't want to have seen any of these). That brings me to the biggest problem with the entire movie: there isn't a single character I care about, and in fact, Dark is so irritating it's hard not to wish ill on him. As the film ends, the plots converge as the hoods come to the hospital for Dark which is actually the only interesting intersection of storylines in the movie, but the glimmer of interest that was sparked is almost as quickly dashed by a terrible breaking of the fourth wall.

That there is some major league talent on display here is indisputable, making it more astonishing that with a great cast and tons of ability behind the camera that something this difficult to sit through was the result. The film was estimated to have cost around $9,000,000 and grossed about $336,000 in its US release. I'm frankly surprised it did that well.

The DVD includes a commentary with director Keith Gordon. I'm normally one to watch a film again to hear a cast or director commentary, even for films I didn't particularly care for. Over the years I have really enjoyed the insights I've gleaned from commentaries, and have even reflected and changed my mind to some degree about a couple of films after seeing them again with the commentary enabled. In this case I made an exception to my rule as there's absolutely no way I am ever going to watch this again. In fact I just want it out of my house. Tomorrow's trash day.

Pamala P. Ritchie
4.0 out of 5 stars This needs more than one viewing
Reviewed in the United States on June 13, 2008
Verified Purchase
What can I say? I was a Singing Detective virgin, being ignorant of the British TV show or the story line. I bought it for Robert Downey, Jr. It is weird, disturbing and pulls you in like a moth to a flame. I have watched it several times now, getting a little more understanding every time I do. My favorite scene is the Mr. Sandman number. How funny!

The acting is supurb; why this didn't get any critical acclaim is beyond me. Robert Downey Jr proves, yet again, that professionally no one can touch him. He is a rare class of actor that can deliver any range be it humor or tragedy. This role had to be a challenge though with the total body make up needed for Dan Dark's horrible skin condition; not to mention the emotional roller coaster the character is on. The man appears to cry real tears at one point! Kudos RDJ!! I wish The People could vote for Oscar winners and not "The Academy". There would be a lot of different winners. RDJ would have several of the gold guys on his mantelpiece if I had anything to do with it.

I don't care for the ending at all; I probably don't totally understand it yet. For a SD newbie, trying to figure out which scene is in Dan Dark's tortured mind or is for real is part of the fun of this film. I intend to see the British series as soon as I can. Maybe I can understand the ending better. Hummm......

It's not for everyone but for those willing to take a risk and actually have to think about a story rather than just watch it, oh, do try this film.
Read more
12 people found this helpful
Helpful
Comment Report abuse
See all reviews

Mr. John J. Power
4.0 out of 5 stars Four Stars
Reviewed in the United Kingdom on March 22, 2018
Verified Purchase
I am more than Happy with the Order Thank You
Read more
Report abuse

jennifer bloomer
5.0 out of 5 stars great film
Reviewed in the United Kingdom on November 2, 2012
Verified Purchase
Loved this being a RDJ fan but Mel Gibson is great in it too. Enjoyed it as much as the bbc series of same name
Read more
One person found this helpful
Report abuse