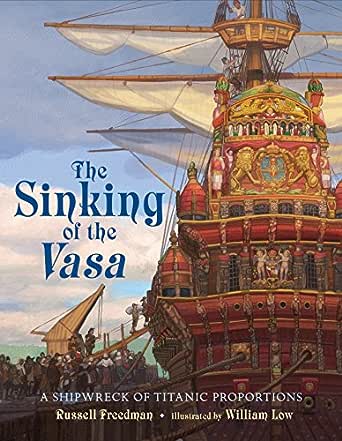 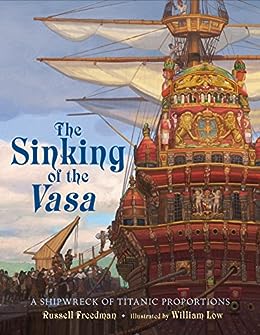 The Sinking of the Vasa: A Shipwreck of Titanic Proportions Kindle Edition

"Underwater scenes depict exciting salvage efforts and include a breathtaking gatefold of the Vasa being lifted to the surface... A richly crafted work of history for upper elementary schoolers." ―School Library Journal, starred review, on The Sinking of the Vasa

"This winning combination of engrossing narrative and evocative illustration should appeal to fans of shipwreck stories, history, and undersea archaeology." ―The Horn Book on The Sinking of the Vasa

"Light-infused scenes bathed in aquamarine hues, including a clever gatefold of the ship’s remains being lifted toward the surface, are remarkably lifelike in perspective and scale, and realistic moments (glinting fish scales, the bulky folds of a diver’s suit) complement the detailed storytelling." ―Publishers Weekly on The Sinking of the Vasa

"Low's digital illustrations are sumptuous and stunning, and they could pass for traditional paintings." ―Kirkus Reviews on The Sinking of the Vasa

"A highly readable and well-documented overview of a fascinating aspect of World War II." ―School Library Journal, starred review, on We Will Not Be Silent

"Among the wealth of good Holocaust literature available, Freedman's volume stands out for its focus and concision, effectively placing the White Rose in its historical context, telling the story of Nazi Germany without losing the focus on the White Rose, and doing so in just over 100 pages." ―Kirkus Reviews, starred review on We Will Not Be Silent

"Thoroughly researched, with numerous archival photos, this well-told story of the White Rose opposition unfolds chronologically and with building suspense." ―Publishers Weekly, starred review on We Will Not Be Silent

Russell Freedman (1929 - 2018) was the author of many award-winning books for children, including Newbery Medal winner Lincoln: a Photobiography, and Newbery Honor books Eleanor Roosevelt: A Life of Discovery and The Wright Brothers: How They Invented the Airplane.

William Low is the author and illustrator of Daytime Nighttime, Machines Go to Work, and the New York Times Best Illustrated Book Old Penn Station. He has illustrated numerous other books for children, including Feathered Dinosaurs by Brenda Z. Guiberson. He teaches at the Fashion Institute of Technology in New York City.

3.3 out of 5 stars
3.3 out of 5
4 customer ratings
How does Amazon calculate star ratings?
Amazon calculates a product’s star ratings based on a machine learned model instead of a raw data average. The model takes into account factors including the age of a rating, whether the ratings are from verified purchasers, and factors that establish reviewer trustworthiness.
Top Reviews

Tomas Milo
3.0 out of 5 stars Having been to its museum, I enjoyed revisiting the Vasa. Those unfamiliar with it, may not care.
Reviewed in the United States on August 23, 2018
Verified Purchase
The main reason I bought this book is because I had visited the Vasa museum in Sweden a few years ago. It is set up in two sections, the building of the ship and then the recovery and restoration. The beginning of the book tells the story of the Vasa’s creation with wonderful illustrations and is well written. The prose for the part explaining the recovery and restoration process were quite lengthy and could have been condensed. Young children may lose interest, and I wish they had made it more succinct like the beginning of the book. Overall it is an interesting story about a boat. Though if you are not familiar with the boat, and haven’t been to the museum like me, you may not care about the story at all.
Read more
3 people found this helpful
Helpful
Comment Report abuse

Barbara Paulsen
1.0 out of 5 stars This is a children’s book.
Reviewed in the United States on December 16, 2019
Verified Purchase
I can only say I was disappointed with my selection. It reads about 4th grade level. I spent almost $20 on this and had hoped for a bit more information. What I got was about a quarter of a page of writing on each page with cartoonishly drawn pictures. If you have children of this age you would probably rate it higher.
Read more
Helpful
Comment Report abuse
See all reviews from the United States