The Siren Chronicles, Book 1 and millions of other books are available for Amazon Kindle. Learn more 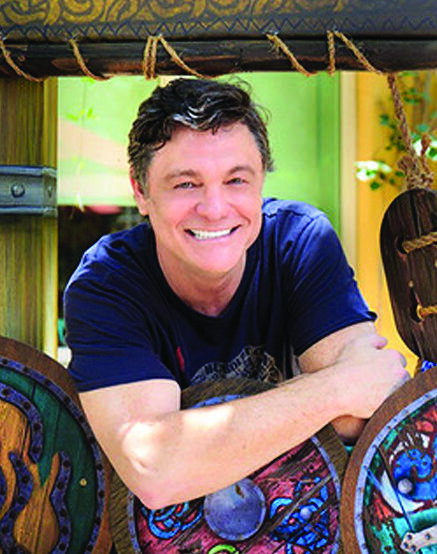 by Douglas J. Sloan (Author)
4.5 out of 5 stars 31 ratings
Book 1 of 1: Siren Chronicles
See all formats and editions
Sorry, there was a problem loading this page. Try again.

While leading the clean up of the worst oil spill in California history, Marine Biologist Elias Courtney stumbles upon the unthinkable. The beautiful young woman, washed up on the desecrated beach, tangled in the black seaweed, is still alive, but barely. What would possess someone to enter these black poisonous waters, the cause of so many innocent creatures’ demise?!! For that matter, how IS she still alive? How long has she been under the water? As Courtney would soon find out -- her entire life. In fact, this was the young mermaid’s first time on land. Lorelei with companions, Seanne and Millisine, has travelled a long way to walk these scarred shores. Now separated by the horrific oily mess that only humans could have caused, the three sirens must struggle to stay alive as they attempt to navigate this strange new world. They must reunite and begin the “Earthquest” that is their reason for being on land. Their underwater home is sick, dying off at an alarming rate. And whatever is causing the near extinction of the last remaining mermaid colony, clearly originated from exactly where they find themselves. Edward Titan had waited decades for this moment. All three have arrived, hopeful and innocent, completely unsuspecting. Soon the ocean’s strongest, smartest and most intuitive sirens will find themselves up against years of festering anger and hatred. Titan’s retribution will be swift and brutal. And it will mean the end of an entire civilization. The Sirens’ Song will soon be no more. THE SIREN CHRONICLES: BOOK ONE, is the exciting first installment in a series of SIRENS books that will follow these miraculous young heroines across the globe, both above and beneath the ocean. As they try desperately to stave off a psychotic creature bent on destroying the planet, they discover new species, battle old enemies and face challenges they never could have imagined.
Read more
Previous page
Next page

Start reading The Siren Chronicles, Book 1 on your Kindle in under a minute.

Douglas J. Sloan has been a world-renowned storyteller for over 25 years. He has been the Writer, Director and Executive Producer of some of the most successful young adult and children’s programs in history. Starting with the multi-billion dollar MIGHTY MORPHIN’ POWER RANGERS, Douglas wrote, directed and/or produced close to 200 episodes of the mega-franchise for FOX Kids and then again for The Disney Channel. Over the next several years, Douglas concentrated on long-form TV programs, starting with the beloved Disney Channel Movie, JOHNNY TSUNAMI. What followed was a string of highly successful “DCOMs,” including MOTOCROSSED, MINUTEMEN and THE PRINCESS PROTECTION PROGRAM starring Selena Gomez and Demi Lovato. Most recently Sloan has been the Executive Producer and Head Writer for the wildly successful DREAMWORKS DRAGONS: RIDERS OF BERK, the 109 episode TV series based on the HOW TO TRAIN YOUR DRAGON film franchise. Throughout his career, Douglas has either won or been nominated for nearly every possible Television award, including the Emmy, The WGA Award, the Humanitas Prize and the Kid Screen Award. He currently lives in Glendale, CA with his wife, Mindy and their three dogs, Cocoa, George and Betty. THE SIREN CHRONICLES, BOOK 1, for teen readers and older, is Douglas J. Sloan’s first novel.

Aisha K.S. Hashmi, NRCPT
5.0 out of 5 stars Great for any and all ages, wonderfully written.
Reviewed in the United States on July 29, 2017
Verified Purchase
Marine Biologist Elias Courtney is heading an oil cleanup in California and finds a beautiful woman, washed up on the beach, barely alive. Courtney fnds out this is not a woman but a mermaid, and its her first time on land. And she didn't come alone. Her name is Lorelei, and her friends are Seanne and Millisine. All three sirens reunite to begin the “Earthquest” that has brought then here in the first place. Their home is no longer habitable. But on the horizon is soneone who is waiting.... And what he is trying to nay eradicate the last of the remaining mermaids. This is highly imaginative, filled with wonder and I could not put it down. I highly recommend this and hope to read the rest of this amazing series, this certainly has started off on an amazingly strong start!
Read more
One person found this helpful
Helpful
Report abuse

ExLawyer
5.0 out of 5 stars Ariel who?
Reviewed in the United States on July 10, 2017
Verified Purchase
Bought this book to read with my 8 year old daughter who loves mermaids. It scared her a bit. But then she settled down and really enjoyed it. It's a very easy read. The action is great and the characters are really well drawn. I will be interested to see where it goes from here. Definitely a recommend.
Read more
Helpful
Report abuse

Maggid
5.0 out of 5 stars Wow-O-Wow!
Reviewed in the United States on August 7, 2017
Verified Purchase
This story is fantastic! Perfect for our era, timely and well crafted.

This book is a real "page turner."
I was never able to guess what was going to happen.

This author has skill, talent and imagination.

exorcissy72
5.0 out of 5 stars Highly Recommended
Reviewed in the United States on July 31, 2017
Verified Purchase
I really dug this a lot. The Mermaid world is great and the villains are awesome. Also it's awesome to have three strong female leads. If there's any downside it's the fact that Book 2 isn't avalible!

Lucas
5.0 out of 5 stars Fantastic!
Reviewed in the United States on July 13, 2017
Verified Purchase
What a great read. Bought this for my daughter but ended up reading it with her. Wonderful characters. Great message. This is the kind of storytelling we need more of.
Read more
Helpful
Report abuse

Risembool Ranger 32
4.0 out of 5 stars Fab fantasy story!
Reviewed in the United Kingdom on July 13, 2017
Verified Purchase
Really enjoyed this book. It wasn't too slow or too fast. It had a good mix of comedy, drama and action. The interactions between the characters is great and the plot just sucks you in and won't let go till you're done reading.
Found it hard to put this down!
Eager for the next installment to this series!!
It reminded me of the movie Splash and all those great movies of adventure quests!
Read more
Report abuse
See all reviews
Back to top
Get to Know Us
Make Money with Us
Amazon Payment Products
Let Us Help You
EnglishChoose a language for shopping. United StatesChoose a country/region for shopping.
© 1996-2021, Amazon.com, Inc. or its affiliates