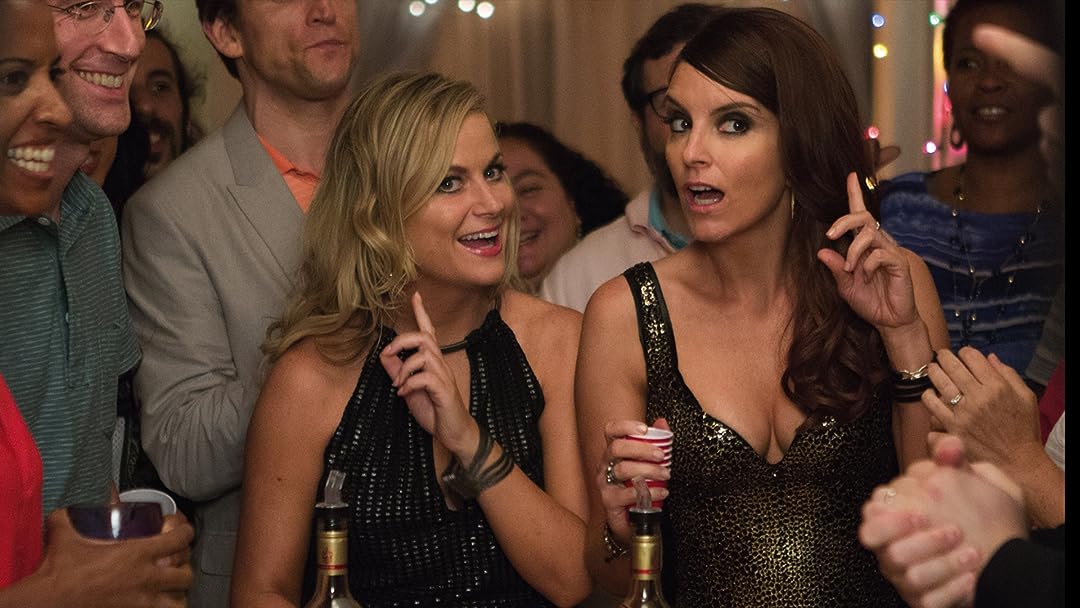 (7,692)
6.02015X-Ray18+
Tina Fey and Amy Poehler star as sisters who return to their family home and throw one final high-school-style party that turns into a cathartic rager that they really need.

Matt jonesReviewed in the United States on November 19, 2022
5.0 out of 5 stars
So funny
Verified purchase
These two always crack me up!

Empowered CoachingReviewed in the United States on October 15, 2022
5.0 out of 5 stars
Love this fun movie!
Verified purchase
I LOVE this movie & watch it over & over! Everyone in it is great! It is especially fun if you were in high school in the 1980's.

Karl WeaverReviewed in the United States on May 13, 2016
4.0 out of 5 stars
Blu-Ray > Movie, bonus laughs
Verified purchase
My wife watched this pay-per-view and was not impressed. Undaunted, I purchased the Blu-Ray anyhow, as I'd not viewed it. It's always good to go into a film with low expectations, as you can rarely be disappointed. So I did get multiple laughs out of it.
Basic plot is simple: two sisters living in different states are brought back together to clean out their bedroom(s) because their parents are moving to a condo. Naturally they have to have issues in their lives too. Both are divorced. Tina Fay's character Kate has a young adult-ish daughter, and Kate has trouble holding down jobs. Amy Poehler's character Maura has no kids and is a nurse who falls into rescue mode even when people don't need or don't want rescuing.
The essence of comedy often is taking some real-life situation which has awkwardness about it, and then exaggerating it to the extreme. This is done in Sisters in multiple ways. Yes, some of this humor is typical American film humor with giant penis drawings on walls etc., but in other places the humor is more sophisticated, and you'd better be ready for it to appreciate what you're seeing. I'm going to give some heads up for a few pieces of less slapstick humor: trying to get someone to pronounce your name right, especially if there's a language barrier. Kate is a beautician and the story has them visit an upscale nail salon in Orlando because she's looking for a job. This is a Korean-owned shop and Maura strikes up a conversation with a young Korean girl there named Hae-Won (played by Greta Lee). That's where the name pronunciation comes in. Or how a divorced woman with rusty dating skills strikes up a conversation with an attractive single guy. That would be James (Ike Barinholtz) who lives a few doors down from the parental home. Or people at parties who bore you, and how to manage that gracefully.
This is very much a comedy about middle age. Neither sister has sufficiently matured and the prospect of literally having no parental home to return to anymore, and seeing all the stuff they left behind which has to be discarded, precipitates an acute attempt to regress to their teenage party years. So the centerpiece of the movie is the extended party they throw at the (just-sold) home, to which they invite all their old high school friends and new ones they just made returning to town. This is a convenient place to run down some other cast names: Maya Rudolph plays Brinda, a gal that Kate (Tina) has had a grudge against ever since high school. There's quite a funny scene when they first run into each other buying groceries. James Brolin plays dad and Dianne Wiest plays mom. The script doesn't really allow them a comedic role and their characters remain somewhat one-dimensional. John Cena appears as "Pazuzu", a drug dealer. He's almost as quiet as Silent Bob and there's some strictly visual humor as he's often positioned next to Tina Fay, illustrating just how large he really is. Among a variety of other guests at the party is Alex played by Bobby Moynihan, a forever would-be comedian who likes doing impersonations. Much of his performance he seems to effectively channel Wayne Knight, even when he's impersonating someone else. Samantha Bee is in here as "Liz".
We watched several of the bonus features on the Blu-Ray including the gag reel, more improvisation scenes, and extended versions of several other scenes [perhaps my favorite was "Adult Parties Are Boring"] and there's some great comedy in here that you never see if you only watched the theatrical version. Bottom line: harmless middle-age comedy, maybe not a home run but it does deliver laughs.

AnonymousReviewed in the United States on October 7, 2022
5.0 out of 5 stars
Tina Fey comedy
Verified purchase
This movie was hilarious! Love the old SNL Cast!

Snap: Vice78577Reviewed in the United States on September 2, 2022
5.0 out of 5 stars
Best Funny Thing You Will See
Verified purchase
That John Cena Is soo Funny 🤣

football fanReviewed in the United States on March 20, 2016
3.0 out of 5 stars
Three and half stars, not three or four.
Verified purchase
Neither here nor there, neither three or four stars, I would rate this Tina Fey, Amy Poehler film, three and a half stars, yet that's impossible.

I'm a big fan of the comedic duo: Fey and Poehler. From SNL Weekend updates to the Golden Globe award show, the two comediennes make me laugh so much and so hard, I literally burst a rib when I see and hear them. They are today's reigning comic duo second to none. They took the crown from Abbot and Costello, Laurel and Hardy, and every other comic duo that ever existed, and have claimed today as the number one, best comedy team in our culture.

Yet, by watching this movie, Sisters, it's hard to tell how truly funny they are. The jokes in this movie are raunchy, crude, and tasteless. Nonetheless, sometimes crude jokes are funny, and so it is with this movie. The jokes are childish, yet funny in its own way. The story kicks off when the sisters, Kate, played by Fey, and Maura, played by Poehler, return to their childhood home. Surprise for the quickly approaching middle-age gals, their parents are selling their childhood home. To accept the idea, the sisters throw a party for old high school, neighborhood friends. And one, who had lifelong grudges against the sisters, drops by, then calls the cops to try to stop the raucous festivities.

Nonetheless, this movie is more about sisters, and returning to the old stomping ground neighborhood, it's more about growing old, and facing life, wrinkles, failed relationships, and broken dreams, and all. This movie's selling point, for me, however, is Fey and Poehler. They are hysterically funny. Not however, in this movie, at least some of the time. They are funny, but only on occasion. Maybe better writers, or creative juices, would have helped to make Sisters really funny. But for the most part, it didn't happen. This movie needed help to make it really worthwhile seeing. Yet, it never really got the necessary creative, comic thinking to really help it. Crude and raunchy jokes are funny to a point, but when, it's the main thrust and idea for comedy, it falls apart.

Sisters, however, is not a total flop movie. It has its funny moments. It does elicit chuckles and belly laughs here and there. Nonetheless with two brilliant comic actresses I expected so much more. I didn't get it, only got some once in a while laughs. Still, I wasn't too disappointed with the film. They are funny, just they weren't at their usually hysterical funny selves. As a fan, I was, and wasn't disappointed. I am more disappointed with the facts of life, there aren't half stars to give this movie on the comment board. So I will write it out, instead, I think this is a three and a half stars movie. Funny yet not the brilliant comic duo's A game; more like their C plus game,

Bobbi D.Reviewed in the United States on July 2, 2022
5.0 out of 5 stars
Hilarious
Verified purchase
My type of humor and these wonderful actresses played well off one another!

LindsayReviewed in the United States on May 18, 2022
3.0 out of 5 stars
Bettter the first time
Verified purchase
This was very funny to me the first time I watched it back when it came out. But now that I got it on here and watched it the humor in it wasn't as good. Maybe because I had seen already or I am not sure. But I don't care to watch it again.
See all reviews
Back to top
Get to Know Us
Make Money with Us
Amazon Payment Products
Let Us Help You
EnglishChoose a language for shopping. United StatesChoose a country/region for shopping.
© 1996-2022, Amazon.com, Inc. or its affiliates