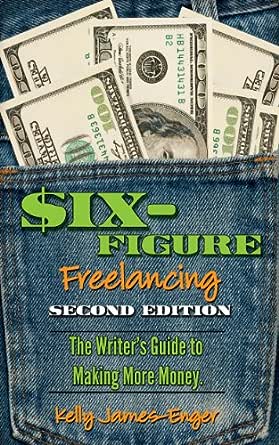 4.6 out of 5 stars
4.6 out of 5
15 customer ratings
How does Amazon calculate star ratings?
Amazon calculates a product’s star ratings based on a machine learned model instead of a raw data average. The model takes into account factors including the age of a rating, whether the ratings are from verified purchasers, and factors that establish reviewer trustworthiness.
Top Reviews

Kathy Sena
5.0 out of 5 stars A terrific guide -- now even better
Reviewed in the United States on March 12, 2013
Verified Purchase
I bought this book when the first edition was published a number of years ago. It became a bible of sorts, as Kelly James Enger packed so much practical advice into it. I know I got more and better freelance-writing gigs because of it. Now it's time for a second edition, and the author has come through again, with updated material and sound advice for making it as a well-paid freelancer -- even in the current economy. She doesn't get soft with the reader on anything about this business. It's tough out there. But there is good-paying work to be had, and she will show you how to position yourself to get it. You will be a better business person after reading this book. And that's what it takes to become a Six-Figure Freelancer.
Read more
5 people found this helpful
Helpful
Comment Report abuse

Galery
4.0 out of 5 stars Very Informative!
Reviewed in the United States on July 30, 2017
Verified Purchase
It's a good book to read if you are a writer in any way. Lots of information, easy to read. The information given in the book offers much to think about concerning what someone can possibly do with good writing skills. I was so inspired by the previous edition, I ordered this one. It's a good book.
Read more
Helpful
Comment Report abuse

Tim Owen
5.0 out of 5 stars An excellent place to start
Reviewed in the United States on August 22, 2013
Verified Purchase
I've just finished the first edition and now have the second. This is a warmly written and yet honest account of her writing career (briefly) and of the industry. As a new writer this will become one of the references that I will use time and again. She is also quick to recommend other writers being not to proud as well as excellent web sites to address further questions. I have a handful of books that I would recommend but this is one of the first one that I would give out to address things on the commercial end. She and Robert Bly (whom she also recommends) are excellent writers and wonderful to encourage. If you want a start, start here.
Read more
One person found this helpful
Helpful
Comment Report abuse

Carrie
5.0 out of 5 stars Great update of a great book!
Reviewed in the United States on April 22, 2014
Verified Purchase
I loved the first edition of this book, but the times, they are a changin, and this book gives all the right updates without losing the best parts of the first edition. Everything you need to know about freelance writing in one book... great overview.
Read more
3 people found this helpful
Helpful
Comment Report abuse

Stella CarrierTop Contributor: Writing
TOP 1000 REVIEWER
5.0 out of 5 stars Inspired To Share After A Sleeptime Wisdom Seeking Dream I’ve Had
Reviewed in the United States on September 16, 2015
Verified Purchase
Utilizing the enterprising ideas in the book are harm-free outlets for me to seek out what I can in order to strengthen my creativity and use the medium of writing as a way to achieve increased personal evolution in all areas of my life. Six-Figure Freelancing (Second Edition) The Writer’s Guide to Making More Money by Kelly-James Enger contains multiple ideas either for people who want to pursue freelance writing on the side or full-time. Metaphorically speaking, I feel as if the author gave me a car to drive towards learning what I can in terms of freelance writing instead of just walking to my destination (there is nothing wrong with walking, I’m just making a point on the information contained for those new to freelance writing), I say this because some of this information may already be known to those who work in fields pertaining to writing, consulting, public relations, being a brand ambassador etc, but extremely helpful for those who are writing novices working outside the fields that are traditionally conducive to freelance writing. Some of the following ideas in her book;
Pg. 63-The Digital Millenium Copyright Act of 1998 (DMCA)-The author quotes a person by the name of Erik Sherman as admitting that he would expect to get paid if the site was commercial, but may also take into account if there aren’t going to get a penny from the site’s owner.
Pages95- 97-a man who has worn multiple hits in the freelance writing sector (ghostwriter, editor, collaborator, book doctor, and entering the world of books (i.e. building a platform, a nonfiction pitch letter etc.).
Page 127; She features a writing query from an example of a writer who is married to an IT expert and has a 2 and a half year old son.
Page 177- Kelly James-Enger uses the case study of Leah Ingram who writes books, articles, does spokesperson projects, balances parenting with being a homemaker, and usually keeps a routine of setting aside 815 am to 345 p.m. for work.
Page 223; A feature on Margaret Littleman who had been writing for magazines and newspapers for several years and who eventually branched out with writing a book called The Dog Lover’s Companion to Chicago. There is also a feature on Robert McGarvey, a successful freelancer for over thirty years, who write a couple of biotech stories for the Midwest Express and went on to write more than $30,000 of work for the Harvard Business Review, New York Times, and Boston Globe.

Angela
5.0 out of 5 stars Good information
Reviewed in the United States on August 24, 2013
Verified Purchase
This book has lots of good information. You will not regret purchasing this book. The author's style is engaging and pleasant to read.
Read more
One person found this helpful
Helpful
Comment Report abuse

Ryan Evans
5.0 out of 5 stars Practical Advice for freelance writers
Reviewed in the United States on December 18, 2013
Verified Purchase
This is an excellent book that gives practical and inspirational advice for writers in the freelance world. I highly recommend.
Read more
Helpful
Comment Report abuse
See all reviews from the United States