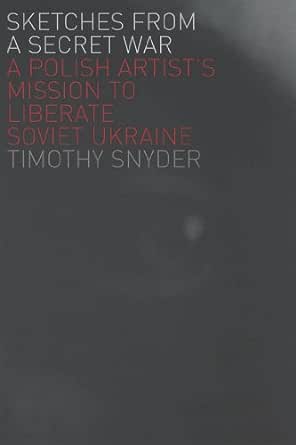 Flip to back Flip to front
Audible Sample Playing... Paused   You are listening to a sample of the Audible narration for this Kindle book.
Learn more
ISBN-13: 978-0300125993
ISBN-10: 0300125992
Why is ISBN important?
ISBN
This bar-code number lets you verify that you're getting exactly the right version or edition of a book. The 13-digit and 10-digit formats both work.

“Strikingly new, original, and readable. This book will no doubt force everyone in the field to rethink Ukrainian, Polish, and Soviet history during the interwar period.”—Hiroaki Kuromiya, Indiana University

"Another thrilling and erudite book on the intricate history of East European borderlands by Timothy Snyder, a master of the genre."—Jan Gross, Princeton University

“[A] compelling book. . . . It is hard not to see this eminently 20th-century story as a biography for a new century. . . .”—Mark Mazower, Kritika: Explorations in Russian and Eurasian History

"Timothy Snyder's Sketches from a Secret War is a rigorous, scrupulous, historical narrative, but a dozen spy novels lurk in these pages. The life lived by the artist Henryk Jozewski was a kind of clandestine masterpiece; Soviet operatives, right-wing assassins, secret police, idealistic Poles. Which makes for an extraordinary story—surprising, compelling, and true."—Alan Furst
(Alan Furst) --This text refers to an out of print or unavailable edition of this title.

Timothy Snyder is professor of history at Yale University.

ab
5.0 out of 5 stars Five Stars
Reviewed in the United States on January 18, 2016
Verified Purchase
Vollynia should be transferred back to Poland.
Read more
Helpful
Report abuse
See all reviews