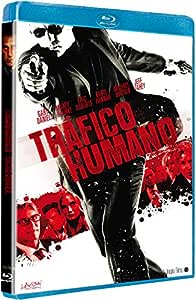 Secure transaction
Your transaction is secure
We work hard to protect your security and privacy. Our payment security system encrypts your information during transmission. We don’t share your credit card details with third-party sellers, and we don’t sell your information to others. Learn more
Details
Ships from
DaaVeeDee
Sold by
DaaVeeDee
Return policy: This item is returnable
You may be charged a restocking fee upto 50% of item's price for used or damaged returns and upto 100% for materially different item.
Read full return policy
New & Used (3) from
$21.98 + $3.99 shipping

Playback Region 0 :This will not play on most DVD players sold in the U.S., U.S. Territories, Canada, and Bermuda. See other DVD options under “Other Formats & Versions”. Learn more about DVD region specifications here

Spain released, Blu-Ray/Region A/B/C : it WILL NOT play on regular DVD player. You need Blu-Ray DVD player to view this Blu-Ray DVD: LANGUAGES: English ( Dolby Digital 2.0 ), Spanish ( Dolby Digital 2.0 ), Spanish ( Subtitles ), ANAMORPHIC WIDESCREEN (1.78:1), SPECIAL FEATURES: Anamorphic Widescreen, Interactive Menu, Scene Access, Trailer(s), SYNOPSIS: Traumatised by the death of an innocent. Killer for hire Bradley drops out of society, seeking meaning roaming the dangerous streets of a tough inner city ghetto. When he encounters a savage pimp and a desperate woman under his control Bradley finds the means to give battle to the inner demons that have eluded him. He embarks on a quest to save a young girl from the clutches of the brutal gangsters that trade human beings as currency. Drawn deeper into a sickening world in which age is no bar to exploitation and pursued by police, gangland villains and a mysterious agency known only as The Executive. Bradley discovers an ever deepening web of corruption and vice, and a dangerous game in which nothing is what it seems and no one can be trusted. ...Skin Traffik (2015)

Shawn Haver
3.0 out of 5 stars Three Stars
Reviewed in the United States on November 12, 2015
Verified Purchase
If you're a Gary Daniels fans you sure enjoy it.
Read more
2 people found this helpful
Helpful
Report abuse

The Movie Guy
1.0 out of 5 stars SOME PEOPLE JUST DESERVE KILLING
Reviewed in the United States on April 26, 2015
Bradley (Gary Daniels) is a hitman with a conscience. He wakes up in San Francisco and does his morning routine: splashes his face with water, 2 sit-ups, 7 push-ups, 2 oz of green tea on the rocks. He gets his orders from a manila envelope in a church while he narrates, "some people just deserve killing" cue the picture of Jesus. He gets cash in various currency and a Russian passport so he can travel to London.
After a brief encounter with Mickey Rourke, he does some free lance work and goes vigilante over some Russian mafia types running prostitutes. Woman (Dominique Swain) with a terrible accent needs sister saved form bad guys. Bradley works for Eric Roberts by no surprise. He is up against bad guys Michael Madsen and Darryl Hannah who looks like a Botox vampire, a long fall from the spanking material she used to portray.

The fighting was fairly bad as there a void of the exaggerated hit noises that goes into action films. Instead it sounded like soft blows on leather jackets, mostly because they were wearing leather jackets and barely touching each other.

The dialogue was bad, at times so bad as to be entertaining.

Joe Smart
1.0 out of 5 stars If we are really lucky maybe this will never get released in America
Reviewed in the United States on July 15, 2015
Thoroughly dire, haphazardly constructed action movie about a hit man (Gary Daniels who apparently has no acting ability whatsoever) that retires after a job goes sideways. The Gary Daniels voice-over where the hit man claims to only kill bad people and always asks the reason for the hit to make sure the target deserves it doesn't jibe much with a later scene where his former boss (Eric Roberts) talks about how the hit man became soft after his last job--but the whole movie is that sloppy and inconsistent.

During an early scene where Gary Daniels is ordering takeout in a Chinese restaurant two young black hoods wander in and one is apparently supposed to have shoplifted something--except there is nothing around that the teen could have grabbed since there are no visible shelves or coolers. At another point some Russian thugs beat up two prostitutes outside Gary Daniels apartment--one is frantically knocking on his door for help but he doesn't want to get involved. The thugs knock around the girls some more, throw them in a car and drive away. A few minutes later when Gary Daniels finally makes up his mind to act and goes outside the whorehouse turns out to be about four doors down from his apartment--so what was the point of the car? Did they drive 100 feet?

Dominique Swain's hammy performance as a Russian hooker is actually entertaining and for a brief time helps to offset Gary Daniels inability to express any emotion besides possibly indifference. Unfortunately Skin Traffik makes the very great mistake of killing her off and with her goes literally the only entertainment value the movie actually had.

The supporting cast is filled with talented actors including Mickey Rourke, Daryl Hannah, Eric Roberts, Michael Madsen, and Jeff Fahey--all of whom are wasted, although Eric Roberts at least seems to be trying to make the most of his limited screen-time--nobody else makes an impression, all were likely hired for one day's work each and considering what a patchwork mess the script is it's quite possible none of them even knew what the movie was about.

Skin Traffik has a cobbled together script that rarely makes sense for more than 20 minutes at a time, action scenes staged with no skill, energy or imagination and a cast of slumming actors--Mickey Rourke's Oscar nominated turn in The Wrestler was already seven years ago but watching Skin Traffik it feels more like twenty. This one is worthless except for the 10 minutes or so that Dominique Swain manages to enliven--even hardcore action movie junkies would be wasting their time with this one.
Read more
One person found this helpful
Helpful
Report abuse

AmazonAccount
5.0 out of 5 stars Classic Cult Action with All Star Cast
Reviewed in the United States on April 30, 2015
Instant Cult Classic movie. If you've seen or have been following any other Paiaya Films from Dubbed & Dangerous to the present day you will understand the movie universe it's set in.
Read more
Helpful
Report abuse
See all reviews

AmazonAccount
5.0 out of 5 stars Fantastic Action with Legendary Cast !!!
Reviewed in Spain on May 23, 2015
Verified Purchase
Great action movie ! Fantastic cast ! Hard hitting action martial arts drama, which follows a Hitman on his story of redemption and revenge.
Read more
Report abuse
See all reviews
Back to top
Get to Know Us
Make Money with Us
Amazon Payment Products
Let Us Help You
EnglishChoose a language for shopping. United StatesChoose a country/region for shopping.
© 1996-2021, Amazon.com, Inc. or its affiliates