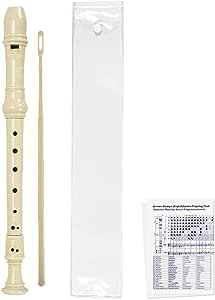 The recorder instrument is one of the most popular Musical Instruments in the world today. The recorder timbre is pure and clear, soft and light. It is called "soft flute" and "flute that sings like a bird". It blows with the force of a natural breath, and it's easy to get a nice sound from the beginning, so it's perfect for young children.

Practice your children’s hand flexibility and coordination when playing together. Explore and develop kids’ brain, cultivate Art and Music talent, especially, when in the teamwork playing.

4.4 out of 5 stars
4.4 out of 5
74 global ratings
How are ratings calculated?
To calculate the overall star rating and percentage breakdown by star, we don’t use a simple average. Instead, our system considers things like how recent a review is and if the reviewer bought the item on Amazon. It also analyzes reviews to verify trustworthiness.

Alice Ceballos
HALL OF FAMETOP 10 REVIEWER
4.0 out of 5 stars Educational and Fun
Reviewed in the United States on November 5, 2019
Verified Purchase
When my older kids were in public school they learned to play these every year. I thought it would be fun to teaach my younger kids too. This one is plastic. The ones we used to get were wooden. I think the plastic will hold up as long as its taken care off. It is an off-white color so perfect for either gender. It comes with instructions which is huge plus . You can also look online and find video s teaching you as well.
Read more
2 people found this helpful
Helpful
Comment Report abuse

Francis Chau
TOP 500 REVIEWER
5.0 out of 5 stars Just like the old days, but comes with a cleaner!
Reviewed in the United States on November 25, 2019
Verified Purchase
Bringing back childhood memories with this noisemaker. Haha!
I only say noise maker because I never practiced enough to get good.
Now it’s my daughter’s turn.

The recorder is well constructed of durable plastic. The pieces for together snugly and evenly.

The sound is as I remember it. Pitchy but true.

Very convenient to have a cleaning stick. We never had that growing up. Bonus!

Janece
5.0 out of 5 stars Love you the German fingerings.
Reviewed in the United States on June 4, 2020
Verified Purchase
Recently retired. Wanted to learn how to play a new instrument.
Read more
Helpful
Comment Report abuse

Craig G.
VINE VOICE
3.0 out of 5 stars A review, and short history lesson
Reviewed in the United States on February 24, 2020
Vine Customer Review of Free Product( What's this? )
As a multi-instrumentalist, I can’t resist writing a bit of history about the Recorder...

The instrument is ancient, has been around since the middle ages, and there have been numerous varieties. It’s also used in many different types of music genres, from Classical to even Rock! A great example: Several were used in the studio version of Led Zeppelin’s “Stairway to Heaven”, all of them played by John Paul Jones.

These are the two types of recorders which are most prevalent today:

- “Baroque”, which was designed in the 17th century, for better tone and projection than older varieties.

- “German” (such as this one) which in comparison are a relatively new development, created in the early 19th century.

Beside being easy to play, this specific product is a great choice for beginners, especially children:

- Very easily cleaned since it breaks down, and includes a rod to assist. But, a warning: If you’re thinking about the dishwasher, don’t do it. ABS plastic is -not- considered food-safe.

- Holds pitch of major notes fairly well, as expected from a German recorder.

- Its ridiculously low price certainly won’t break the bank if you lose interest, damage, or lose it.

In the end, the price remains is the biggest selling point here, whether you just want to check out what playing a recorder is all about, or perhaps take a trip down memory lane back to your younger music class days. The best recorders are eons away from this one quality-wise, but I don't get the feeling that's the purpose here. Enjoy making a bit of music, for cheap!
Read more
2 people found this helpful
Helpful
Comment Report abuse

Reasonable Reviewer
VINE VOICE
5.0 out of 5 stars Sturdy, clear recorder for the starting musician
Reviewed in the United States on March 3, 2020
Vine Customer Review of Free Product( What's this? )
I received this recorder specifically to write a review. That said, I try to be honest and open in all my reviews.

The first thing that struck me about this recorder is that it is sturdy. It is made for the young musician that might sit on it, drop it repeatedly (and perhaps in a mud puddle), etc.

This does not have a reed in it. The sound is produced by running over a thin lip of plastic. So, normal levels of use and abuse will not affect it.

My take is that it depends where your music lover is in his or her journey. Most folks start on the recorder, but then progress to an entirely different instrument (in a potentially different musical family). If you make the first steps in that journey fun, rewarding, and not wildly taxing then he or she is more likely to continue. Just my $.02

All in all, you cannot be the price for this lovely, starting instrument.
Read more

I took recorder in college as one of my Arts Electives. I had a blast! We had students different types of recorders in different tones: soprano, alto, and bass. It was so cool that we had concerts in three part harmony.

This recorder is made of plastic, but seems very nice. It is the soprano recorder tuned to C. It has a decent tone, I tried to get a little vibrato and still trying to get that effect.

It seems to be a decent recorder, one that I can practice to get back to the level I played in college. Also one for kids to learn on.
Read more
One person found this helpful
Helpful
Comment Report abuse

J. Lewis
VINE VOICE
4.0 out of 5 stars Good Instrument for Practicing
Reviewed in the United States on January 12, 2020
Vine Customer Review of Free Product( What's this? )
This is a little more advanced than the recorder I used to have over three and a half decades ago. I am also way rusty but inspired and motivated to play it better. It came with a fingering chart with German and the Baroque systems. You have to go higher than the chart to hit the sweet tones (sopranino and soprano). It also comes with a with a cleaning needle and is simple to disassemble the recorder to clean it. It came in a see through plastic tote with a snap button seal but would have been better with a nylon and maybe even a cloth for the needle, but for the price I might just be a nag. All in all, this is a great deal and a wonderful starting point for aspiring beginner wind instruments.
Read more
One person found this helpful
Helpful
Comment Report abuse
See all reviews