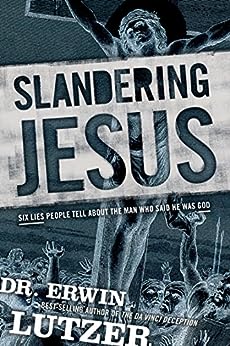 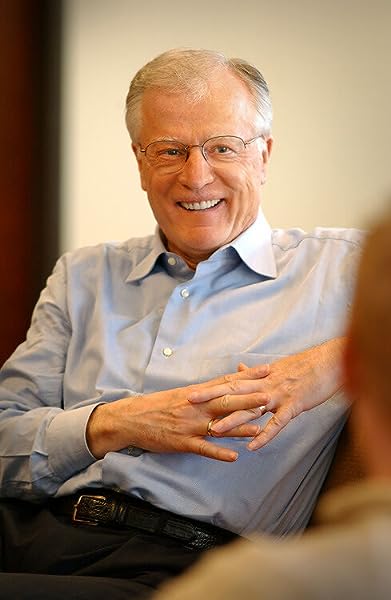 Slandering Jesus: Six Lies People Tell about the Man Who Said He Was God Kindle Edition

by Erwin Lutzer (Author) Format: Kindle Edition
See all formats and editions
Sorry, there was a problem loading this page. Try again.
Read more Read less
Previous page
Next page
Due to its large file size, this book may take longer to download

Erwin W. Lutzer is senior pastor of The Moody Church in Chicago. A graduate of Dallas Theological Seminary and Loyola University, he is the author of numerous books, including the Gold Medallion award winner Hitler's Cross and the best seller One Minute After You Die. He is also a teacher on radio programs heard on more than 700 stations throughout the United States and the world, including Songs in the Night, The Moody Church Hour, and the daily feature Running to Win. He and his wife, Rebecca, live in the Chicago area and have three married children and six grandchildren. --This text refers to an out of print or unavailable edition of this title.

DGal
4.0 out of 5 stars This books hits the nail on the head
Reviewed in the United States on April 27, 2017
Verified Purchase
This book is very clear and concise on who the real Jesus Christ is as opposed to what he's been turned into in the last 50 years or so. It reminds us that God and Jesus hasn't changed, but the world has and just because the world has changed its "interpretation" of what they think the real Jesus is, doesn't mean the real Jesus changed with them. This book explains in detail that Jesus Christ is indeed the son of god and not just a really wise prophet and a good man...similar to Bhudda. Give me a break. Bhudda, nor any of the other good "men" said to us "I am the way, the truth, and the light. No man comes to the kingdom except through ME". This book pretty makes the bold, yet true statement that one either accepts that Christ was savior or accept that he was a mad man. If he is mad you should not listen or believe a thing he says, yet if he is, indeed the savior Jesus Christ then you must accept his words and deeds as truth, but please, no in between and substitutes.
Read more
3 people found this helpful
Helpful
Report abuse

Kristian
5.0 out of 5 stars Great for learning
Reviewed in the United States on December 28, 2015
Verified Purchase
Very helpful in understanding the lies that surround Jesus.
It also introduce things that I would never have thought of on my own.
Read more
One person found this helpful
Helpful
Report abuse

Scooter
5.0 out of 5 stars Slandering Jesus
Reviewed in the United States on April 19, 2008
Verified Purchase
Very enlighting,,, answers lots of questions about what is happening today.I highly recommend this book to everyone,, the Author is very true to Bibical truths.
Read more
3 people found this helpful
Helpful
Report abuse

Phillip L. Hoover
5.0 out of 5 stars Erwin Lutzer is my Pastor...
Reviewed in the United States on March 10, 2009
Every Sunday I have the high honor of worshipping among the people of God at the historic Moody Church here in Chicago. Pastor Lutzer does a masterful job of preaching God's Word, and the Gospel of Christ to his flock.

The most important chapter in this book is Lie # 6, "Jesus is One Way among Many"--the lie that talk show queen Oprah Winfrey has espoused publicly.

It is vitally important that Jesus be represented as He is: The Absolute Divine Son of God...crucified, buried, resurrected, ascended and coming again!

J. W. Ritchlin
5.0 out of 5 stars For Opened Eyes Only!
Reviewed in the United States on January 30, 2008
A very good read. Lutzer keeps to his point in each segment and carves up the lies so prevelent in our "Create your own god" culture. But make sure you read at least the New Testament first or you will look quite foolish saying that Jesus Christ never claimed to be God.
Read more
12 people found this helpful
Helpful
Report abuse

Richard Walter Widen
1.0 out of 5 stars Gets the facts wrong
Reviewed in the United States on January 4, 2008
Religion is one of the few genres without any kind of credible peer review, and it results in hundreds of books that get the basic facts wrong.

Jesus never claimed to be God. The title "son of god" was very common in Jewish literature. It was applied to the nation of Israel, kings, people who were devout in their religious beliefs. It was also a title used by several Roman Emperors.

I doubt Jesus ever claimed to be God. Jesus was dead for decades before the Gospels were written, and very little in the gospels can be considered accurate information.

The best way to think about the historical Jesus? Galilee was not under direct Roman rule. Nobody cared if you protested against Rome in Galilee. When Jesus walked down to Jerusalem to attend a Passover Festival, he crossed the border into a country where protests against Rome were taken very seriously. For whatever reason, Jesus was arrested and executed. I think you have to be pretty dumb, or extremely unlucky, to be arrested and executed while attending a festival. Personally, I think Jesus was drunk when he overturned the tables of the moneychangers.

The author is free to present his personal opinion of Jesus, but it's not as credible as mine. In the first century, because there were so many great names in Greek mythology - Zeus, Apollo, Hercules, Athena, Neptune - it's easy to see why Jewish writers would turn a martyred Jesus into a similar type of hero. But, none of it is credible, or even believable. Jesus was an ordinary human being. He died. It's a tragedy, but so were many other deaths at the hands of the Roman occupation force.
Read more
2 people found this helpful
Helpful
Report abuse

Paul Beaird
1.0 out of 5 stars Jesus was not God??? Jesus was not human!!!
Reviewed in the United States on March 21, 2008
One need not argue with unprovable theology. So, even though Jesus never claimed he was God, theologians abritrarily insist on this belief as correct and its denial as heresy.
What is shocking is the provable claim that he was not human. Well, of course, that depends on regarding the Bible as the infallible Word of God, in spite of the fact that the Bible never claims that the Bible is the Word of God at all.
Nevertheless, in the Blble we find the gospels of "Matthew" and "Luke" who both provide a genealogy of Jesus in order to prove he was in the lineage of the very human King David. When exmaining these biblical genealogies, we find that:
1. They contradict each other throughout
2. They both omit names that belong in the genealogy, as a reading of the genealogies provided in the Old Testament (Numbers, for instance) shows
3. They both include names found nowhere in the Old Testament genealogies
4. They each claim that Jesus came from a different son of David (Nathan? or Solomon?)
5. Matthew claims that his genealogy falls into 3 sections of 14 generations each, yet when one makes a count of the names Matthew provides, it is clear that he (or else the Holy Spirit, if one believes the Bible is divinely inspired) cannot count
6. The clear language of both writers says that the genealogy he provides of Jesus is the genealogy of his father Joseph, which they must if they are claiming that Jesus is in the lineage of David, since only through the line of the father did any Jewish male have his lineage. And, the parenthetical phrase found only in "Luke" "(as was supposed)" is a clear cut insertion by some pious copyist who wanted us to believe that Jesus had no human father.
These contradictions of the writings by the writers themselves make it clear that the Bible writers did not know who the human Jesus was. And, keep in mind, these were the writers who were alleged to be the closest historical humans to Jesus during his lifetime (so claim conservative interpreters of the Bible).
What the contradictions actually provide is conclusive proof that the Jesus of the gospels never was a flesh-and-blood, historical person.
So, if one holds the Bible to be reliable, then one has to follow the evidence it provides about his humanity. That evidence makes it clear there was no such human being.
Read more
4 people found this helpful
Helpful
Report abuse
See all reviews