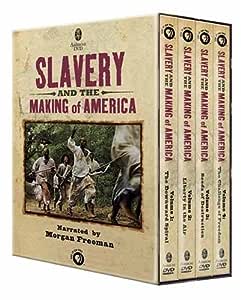 Slavery and the Making of America DVD Set

SLAVERY AND THE MAKING OF AMERICA is a landmark, four-part series that examines the history of slavery in the United States and the integral role it played in shaping the new country's development.

Breaking with conventional documentary production approaches, the series producers, PBS's Thirteen/WNET New York, have used dramatic re-enactments to take viewers back in time and deep into the slave experience. Much of the story is presented from a unique vantage point - through the eyes of the enslaved.

As factually represented in this series, American slavery evolved from a loosely defined labor system which provided some protection under the law, into the tightly regulated enslavement without recourse, based solely on race.

Underscoring how slavery impacted the growth of this country's Southern and Northern states; the series examines issues still relevant today. The variety of cultures from which the slaves originated provided the budding states with a multitude of skills that had a dramatic effect on the diverse communities. From joining the British in the Revolutionary War, to fleeing to Canada, to joining rebel communities in the U.S., the slaves sought freedom in many ways, ultimately having a far-reaching effect on the new hemisphere they were forced to inhabit.

Programs in this series:
Program 1: The Downward Spiral
Program 2: Liberty in the Air
Program 3: Seeds of Destruction
Program 4: The Challenge of Freedom

This four part series, which aired on PBS earlier this year, belongs in every high school library in the country... --School Library Journal

...the series deftly balances strong personal stories with insights into the horrible symbiotic relationship between Northern growth and Southern slavery.... this is recommended. --Booklist

4.6 out of 5 stars
4.6 out of 5
152 global ratings
How are ratings calculated?
To calculate the overall star rating and percentage breakdown by star, we don’t use a simple average. Instead, our system considers things like how recent a review is and if the reviewer bought the item on Amazon. It also analyzes reviews to verify trustworthiness.
Top reviews

K. L. Young
5.0 out of 5 stars Very good historical documentary; revelant today.
Reviewed in the United States on November 24, 2018
Verified Purchase
Very educational and informative. This video will help others understand where we as a people have been, and pretty much where we are going. I hope someone learns something from it, and takes it to heart. "Love ye one another..."
Read more
12 people found this helpful
Helpful
Comment Report abuse

Amazon Customer
2.0 out of 5 stars Episode 1-4 are separate I was not aware
Reviewed in the United States on February 21, 2020
Verified Purchase
Disappointed I was not aware that there are 1-4 videos does not make sense to buy Disc 1 without the rest. I feel that u should market this better so that others will know what they are buying. Useless for me to just buy part 1
Read more
8 people found this helpful
Helpful
Comment Report abuse

JPamaPrime
3.0 out of 5 stars PBS title on DVD
Reviewed in the United States on June 27, 2020
Verified Purchase
I received the set used, good condition, and it was, you could tell it had been used, but gently. I had to purchase it this way because PBS Video refuses to release a new Blu-Ray or 4K version, the title is unavailable for online streaming, and for PBS not to release a new version of such an important topic is shameful. The disc play ok and the Set tells history that needs to be told, the Set just needs updating.
Read more
Helpful
Comment Report abuse

Richard B
4.0 out of 5 stars A good all around documentary
Reviewed in the United States on December 11, 2011
Verified Purchase
As an African-American I am interested in movies about Black history, Black culture, and life during slavery and historical black events.
As a result I purchased about a dozen DVDs on various subject matter which I am just now getting around to viewing.
This DVD gave me more insight into the slavery aspect during the period before we became a nation.
Each DVD was approx. 55 minutes long I would have liked to have had more because of the price, never less this is fine addition to my collection and I recommend it to others for its educational value.

Steve Vrana
HALL OF FAME
5.0 out of 5 stars This Documentary Personalizes the Slave Experience
Reviewed in the United States on March 2, 2012
Verified Purchase
This roughly four-hour documentary, "Slavery and the Making of America," is a concise look at the nearly two and a half centuries of slavery from the first arrival of black indentured servants at the Jamestown Colony in 1619 through the end of the Civil War in 1865. In fact, this documentary also covers the rise of black political power in the South after the war and the impact of the Ku Klux Klan following the end of Reconstruction.

This four-part PBS series covers all the bases and manages to be both scholarly and enthralling at the same time. Here's what makes this documentary work so well:

[] Using Morgan Freeman as the narrator was a stroke of genius. His voice grabs the viewers' attention and doesn't let go. (Hey, he manages to keep my high school sophomores riveted!)

[] In addition to Freeman as the narrator, the makers of this documentary utilize numerous historians and scholars to tell the story providing not only facts, but their own perspectives. This variety of sources makes for compelling listening.

I use this in its entirety every year (along with reading Julius Lester's "To Be a Slave") to provide the necessary background before reading "Adventures of Huckleberry Finn." Slavery all too often is trivialized in textbooks, and this documentary goes a long way toward providing students with a basic understanding of the slave experience. VERY HIGHLY RECOMMENDED

Mr. Hobson, Virginia Educator
5.0 out of 5 stars HS Teacher Says 5 Stars For This Production...and For Morgan Freeman!
Reviewed in the United States on January 17, 2008
Verified Purchase
I have watched and re-watched this series on PBS, and with each episode I always go away having learned something. The researchers and writers were thorough, the re-enactments are well-played*, and the tempo of each segment is appropriate. Morgan Freeman is the perfect choice for a narrator (even better than Whoopie Goldberg in Unchained Memories); he speaks like a wise, maturing uncle versed in the intricacies of a long, unpleasant family history.

My favorite segments are those on David Walker's call to resistance; a certain Miss Freeman, who successfully sued for her freedom; and Col. Tye's band of 18th century guerilla warriors.

*Such re-enactments, when accurately presented, are essential to helping viewers understand the realities of the era, as there are so few photographs and no moving pictures in existence from this lengthy period in American history. (As the narrator says, "America was a slave-holding society longer than it has been a 'free' society.")
Read more
59 people found this helpful
Helpful
Comment Report abuse

William K. Johnson
5.0 out of 5 stars Excellent treatment of the subject of slavery in America
Reviewed in the United States on March 9, 2020
Verified Purchase
Excellent and relatively objective review of slavery in America. It even addressed the subject of indentured servants and how their treatment compared with treatment of black slaves.
Read more
Helpful
Comment Report abuse
See all reviews

Tony Laforce
5.0 out of 5 stars Another Must Buy DVD
Reviewed in the United Kingdom on October 11, 2015
Verified Purchase
It may only be four one long episodes but this is an impressive DVD which is wonderfully told by Morgan Freeman and the various university teachers. The infromation about the brave brothers and sisters is wonderful to hear against the terrible pain and suffering they had to endure is quite amazing. Do not have any doubts about buying this great DVD
Read more
Report abuse

Carla Hancock
5.0 out of 5 stars Five Stars
Reviewed in Canada on December 3, 2015
Verified Purchase
Item as described and arrived on time. THANKS!
Read more
Report abuse
See all reviews