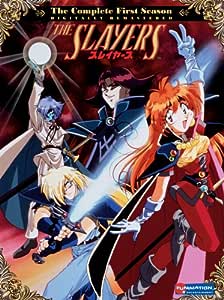 Share
STREAM ANYTIME with Prime Video from $18.99
Have one to sell?
Sell on Amazon

In a land of fantasy and fairytale, magic rules and one can prosper by the point of a sword. But somehwere between the realms of good and evil, a band of misfits stumble upon an artifact which could prove the undoing of all...

Meet Linda Inverse, a spunky sorceress with a penchant for fire, who enjoys nothing more than liberating the unearned from those less deserving. Teamed up with Gourry, a dashing swordsman of unrivaled skill and unrivaled stupidity, they must take on the forces of the demon lord and his countless servants, seeking to save the world and hoping for fame and fortune along the way.

4.5 out of 5 stars
4.5 out of 5
28 global ratings
How are ratings calculated?
To calculate the overall star rating and percentage breakdown by star, we don’t use a simple average. Instead, our system considers things like how recent a review is and if the reviewer bought the item on Amazon. It also analyzes reviews to verify trustworthiness.

Always Samsung
5.0 out of 5 stars AMAZING!!! A Fun ANIME TITLE that has it ALL!!!!!!!!
Reviewed in the United States on January 6, 2008
Verified Purchase
This is a great anime series and i'm not sure if it went on for more then 3 seasons but only 3 seasons were dubbed in English. This series has one of the best English Dubbed actors since Sailor Moon. With all the anime titles out there its hard 4 a SERIES 2 grab & keep your attention. This series kept my attention all the way to the end. Lina Inverse is dubbed by Lisa Ortiz who has such an engaging voice. This set contains all 26 episodes of season 1. I wish the art work was a bit more polished & refined but it tends to be a bit sloppy at times. For some odd reason the opening theme song seems a bit darker then i remember when it was on VHS. Anyways check this series out & its currently almost 50% which is a TOTAL bargain cause thats almost less then 1.00 per episode. If you love Sailor Moon or any fantasy type anime this is right up your alley. I LOVE IT!!!!!!
Read more

Emily
4.0 out of 5 stars Childhood Memories
Reviewed in the United States on March 24, 2010
Verified Purchase
I was introduced to Slayers ten years ago, when I was about 9, and I've always loved it. My brother and I used to watch every episode (we had seasons 1-3) on VHS, but sadly since the introduction of DVDs, it's rare to find a VCR in our household. So when I finally found Slayers on DVD, I was ecstatic and I had to buy it. I'm halfway through the first season now and it's just like I remembered.

It's a very old anime, released in around 1995 or so, and the artwork and the English dubs reflect the time period. The plot is kinda iffy; there are some loopholes that are never explained and many 'filler' episodes, but as such a longtime fan I look past it for the sake of the story. :) There is some cussing (though I'd consider it minimal compared to today's animes and movies), implied nudity (though never explicitly shown), and some adult humor thrown in (which I find amusing since now, when I'm rewatching the season, I finally understand the jokes in the episodes).

I think this is a good, decent introduction to the anime world, and it's certainly a series you can become addicted to. :)

ashley
5.0 out of 5 stars Must have classic
Reviewed in the United States on October 27, 2018
Verified Purchase
I adore this anime . older stuff like this is a little hard to find, relearning old school dvd format was a fun blast from the past. It was great quality no scratches and I get to enjoy this gem of classic anime anytime I want .
Read more
Helpful
Report abuse

Music and Anime Fan 12
5.0 out of 5 stars Season 1 of Fun!
Reviewed in the United States on July 7, 2008
Verified Purchase
Slayers is an Anime Classic! Lina is one of the best charcthers ever and her supporting cast is just as cool! It's funny, cute, and I love how it never takes itself too seriously. Love the Dub cast! And Slayers is just FUN! Now on too season 2! ^_^
Read more
Helpful
Report abuse

genkigimp
5.0 out of 5 stars great series
Reviewed in the United States on January 1, 2010
Verified Purchase
I bought Slayers back before I had a dvd player, needless to say I wanted to upgrade the first season to dvd since I already own the CPM dvds for the other seasons. The dvd case is something that I absolutely hate...it's just a tri-fold in a slip case, not that great but for $10 after shipping I can't complain about that really. The dvd does include both the English and Japanese audio tracks. I know it doesn't say anything in the information about having them, but it does. It's a great value for the show.
Read more
Helpful
Report abuse

Girl with a Passion
5.0 out of 5 stars Lina Inverse is cool!!!
Reviewed in the United States on January 20, 2013
Verified Purchase
I love the slayers. It's a great show. This is a Four dvd set from funimation. The quality is good. Lina and company battle against the forces of Rezo the Red Priest.
Read more
Helpful
Report abuse

Duk Young Choi
5.0 out of 5 stars Very funny show at reasonable price
Reviewed in the United States on August 24, 2008
Verified Purchase
This show is very funny, mix of fantasy and comedy. When this show was launched in DVD format some years ago, it used to cost about US$ 100. No costs only US$ 36. At this price, this is steal.
Read more
Helpful
Report abuse

M.
5.0 out of 5 stars Five Stars
Reviewed in the United States on March 7, 2015
Verified Purchase
a good mixture of comedy and action fun to watch
Read more
Helpful
Report abuse
See all reviews

Winston ''Gab'' Churchill
4.0 out of 5 stars She's lethally lovely. He's gallantly vain. Together they're...The Slayers!
Reviewed in Canada on June 19, 2009
Verified Purchase
Meet Lina inverse...a Pint Sized, Flat Chested sorceress with a bad attitude. Together with her sidekicks Gourry Gabriev, a skilled but dumb as a plywood board swordsman, Zelgadis Grayward, a Chimera man with a serious self-acceptance problem and Amelia Will Tesla Seyruun a justice-serving (too) enthousiastic and hyperactive young princess with good magical skills, they'll fight for good and justice... sometimes...well...when the price is right anyway... oh and if a good restaurant is near.

In the first of the three (soon to be four) series, Lina Inverse, starts her quest when she meets Gourry Gabriev who comes to ''rescue'' her from a gang of bandits...wait a minute, who ever said she needed to be rescued? Anyway, so the pair gets involved in a race to stop the resurection of the Dark Lord Shabranigdo. They soon meet Zelgadis Graywards, a Chimera-Man who seems to be working with the bad guy until he reveals that he only wants to become a regular human again and join forces with our (in)famous pair. Later on, the Trio will meet Amelia Will Tesla Seyrun, whose only fault is to love justice a wee-bit too much and to have a bigger chest than Lina! The whole bunch will soon get caught in yet another quest to save the world...well, they're not really interested to do that, but they were sorta forced into it.

The first series is probably the least enjoyable one of the three, but that doesn't mean it's no good, on the contrary!! It's packed with humor, magical spells, epic fights and monsters! A couple of things make this series not as good as it could've been: If you listen to it with english dubbing, Daniel Cronin's interpretation of Zelgadis is too dark and shady and you almost feel that he's asthmatic. Fortunatly, that's only the case for the first half of the series and Crispin Freeman who interprets Zelgadis for the rest of the series does a terrific job of making Zel a more lively character. After that, the drawings and animations are really outdated until the last arc of the series and although they're not terrible, they're really ordinary. Fortunatly, the last few episodes show you a hint of the improved animation and graphics of the future series.

Still, these points don't erase all the qualities of the series, especially the humor. Our pack of scoundrels will get involved in more than one wacky situation: play in a theater play where Lina is the main villain? Fight a gay Water Dragon? Gourry dressed up as a girl gets a proposition? Lina faking a marriage with a rich boy? Lina can't use her magic because it's ''That time of the month''? And that's just the beginning! You'll laugh your heart out when you won't be on the edge of your seat because of the amazing fights!

The Slayers is worth buying, along with the two other series...Buy it! Or Lina's gonna throw you a Dragon Slave!
Read more
Report abuse
See all reviews
Pages with related products. See and discover other items: slayers anime