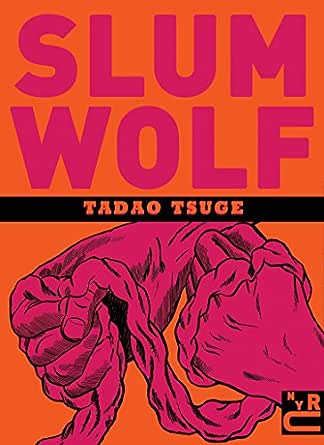 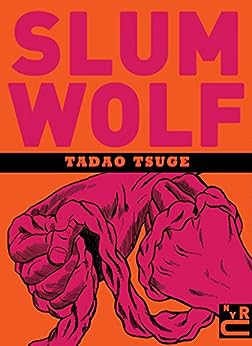 “As a collection of stories, Slum Wolf presents a fully realized view of the persistence of defeat and occupation on the Japanese culture. As readers follow the disaffected and maladjusted characters through their worlds, Tsuge consistently prompts the reader to consider the feelings and circumstances by invoking the reader's empathy and fears.” —Gregory Smith, Pop Matters

"Tsuge’s art veers wildly from cartoon abstraction to painstakingly detailed drawings of shadowy figures and looming city streets, rendered in harsh, energetic linework that propels the eye from panel to panel. The stoic attitude of these excellent pieces is summed up in one  character’s reflection: 'Without receiving a dose of pain once in a while, it was hard to remember the point of staying alive.' This period piece holds lasting resonance.” —Publishers Weekly

Tadao Tsuge is one of alternative manga’s cult stars. Debuting as a cartoonist in the rental kashi-hon market in 1959, he was a leading contributor to the legendary magazine Garo during its heyday in the late 1960s. He has drawn extensively for magazines like Yagyo and Gento, often pulling from his experiences growing up in the slums of Tokyo, working for ooze-for-booze blood banks, and daydreaming while fishing. He currently lives in Chiba Prefecture, north of Tokyo, where he splits his time between cooking for his family and drawing even stranger manga.

Ryan Holmberg is an arts and comics historian. He has taught at the University of Chicago, CUNY, the University of Southern California, and Duke University, is a frequent contributor to Art in America, Artforum, Yishu, and The Comics Journal, and has edited and translated books by Seiichi Hayashi, Osamu Tezuka, Sasaki Maki, and others. --This text refers to the paperback edition.

wilco29
5.0 out of 5 stars Another Masterpiece
Reviewed in the United States on May 22, 2019
Verified Purchase
This is a brilliant comic. I don't understand why a person feels it necessary to give a bad review because it doesn't display properly on a kindle. Shouldn't we be reviewing the content of the art not the format we're reading it on? Anyway, great gritty comic about the aftermath of World War 2. The art is stunning. Highly recommended.
Read more
5 people found this helpful
Helpful
Comment Report abuse

D. Adler
1.0 out of 5 stars Kindle Version Does Not Work At All
Reviewed in the United States on February 5, 2019
Verified Purchase
I bought the Kindle version of this book, and once you get past the cover it consists of completely, utterly blank screens. Although they have nothing on them, the Kindle app still sees them as "pages", i.e. if I start at the cover and swipe right twenty times (seeing absolutely nothing) and then swipe left twenty times, on the last swipe the cover comes back into view. Will ask for a refund.
Read more
2 people found this helpful
Helpful
Comment Report abuse

HE
5.0 out of 5 stars Great!
Reviewed in the United States on June 4, 2019
Verified Purchase
Big fan of Tadao Tsuge. Tsuge's art is sparse but deceptively intricate and lush. The collection of stories here are filled with very deep human subjects.

If you're into it vintage manga with dark, mature themes then you'll find something to like here.

English Reviewer
3.0 out of 5 stars Not the best gekiga mangaka
Reviewed in the United States on July 1, 2020
I love manga and have quite the collection, especially of anthologies that pack together a writer/artists works from Garo in the gekiga style of the 60’s-70’s. Works are far and few between for each artist and it’s been only in the last decade that publishers like Drawn & Quarterly and Fantagraphics have begun to publish more of the genre. Unfortunately, Slum Wolf is at the bottom of the stack in terms of enjoyment and art. I am so open to this style of manga and totally go in with an open mind. Never mind that Tadao Tsuge is extremely racist (not the best time in modern history for such a title), I’m simply agitated at most of the works in this collection. I don’t find the stories to have be at all enjoyable and the artwork is not very good. There’s so many better collections lurking out there including anything by Seiichi Hayashi. I’m not going to be ruthless and write off Slum Wolf altogether as this is one of only two collections ever published in English by Tadao Tsuge so it still has historical importance.i can respect the admiration other reviewers have for him and while there is far worse in manga, I will settle the rating with a 3 out of 5.
Read more
Helpful
Comment Report abuse
See all reviews

Frank Abignale
3.0 out of 5 stars Interesting historical snapshot of a time people want to forget
Reviewed in the United Kingdom on February 6, 2019
Verified Purchase
I wanted the stories to have some semblance of a pleasure plot line. That is the problem with independent comics, I understand that. The message behind his art of really good, but it serves more as a hostrical snapshot than anything else. The art is very inconsistent. I like the drawings at the epilogue way better than the rest of the book. A few moments stand out throughout the book and those moments deserve 5 stars (I know, it’s a reductive way to analyze anything) but the overall feeling is not anything to write home about.
Read more
Report abuse