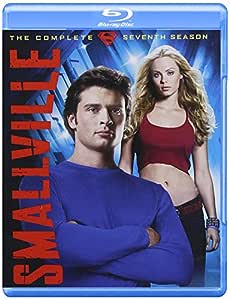 Share
STREAM ANYTIME with Prime Video from $28.99
Have one to sell?
Sell on Amazon

Super-sexy and super-flirty, Clark's super-cousin Kara (Laura Vandervoot) made the splashiest addition to the cast in Smallville's season 7. Unfortunately for Clark (Tom Welling), she's more advanced in her powers than he is (she can fly), and she's not the kind to shy away from drawing attention to herself, whether it's in a skimpy bikini or garnering notice from Lex (Michael Rosenbaum) and Jimmy (Aaron Ashmore, joining the opening credits). Chloe (Allison Mack, rightfully moving ahead of Erica Durance in the credits) is trying to come to terms with her "meteor freak" powers, and Lois (Durance) is dallying with the new Daily Planet editor Grant Gabriel (Michael Cassidy), who has a mysterious past. The dreary drama of Lex and Lana (Kristin Kreuk) is over, and Martha Kent (Annette O'Toole) has permanently departed for Congress, so Lana is now playing house with Clark at the Kent farm. More elements of the DC Comics mythology enter, such as superheroine Black Canary (Alana Huffman), as do guest stars from the universe of Super-entertainment (Lois and Clark's Dean Cain as a doctor who claims to be able to "cure" meteor powers, and Helen "Supergirl" Slater as Clark's Kryptonian mother). Braniac (James Marsters) is still a threat, and Lionel (John Glover) reveals a shady past as part of an order called Veritas, which is purportedly assigned with protecting "the Traveler," an alien who has come to Earth as its salvation. Yet even with the numerous cast comings and goings, the most surprising change happened at the end of the season, when series producers Alfred Gough and Miles Millar announced their departure. Whether that would be a good or bad thing (and whether it would mean an end to their original Smallville edict, "No flights, no tights") would have to be answered in season 8. --David Horiuchi

4.8 out of 5 stars
4.8 out of 5
988 global ratings
How are ratings calculated?
To calculate the overall star rating and percentage breakdown by star, we don’t use a simple average. Instead, our system considers things like how recent a review is and if the reviewer bought the item on Amazon. It also analyzes reviews to verify trustworthiness.

PARISRUNWAY
5.0 out of 5 stars WOW SMALLVILLE EPIC!!!
Reviewed in the United States on November 24, 2016
Verified Purchase
All I can say is wow!!. This show is epic!! No other Superman show or movie can compare to the greatness of Smallville. Infact no other superhero show can compare either. Tom Welling puts such feeling and emotion into Clark Kent, really bringing him to life. Smallville has people from the other Superman movies starring in here or guests appearances in the show as well. Of course DC comics was involved giving insight. It's pretty epic and well thought out. Of course there are very important episodes explaining his past and who he is, as well as Clark experiencing life and life choices in other episodes. Alot of tie in's explaining how and why things came to be when he will one day be superman. I started renting Smallville via Netflix DVD via the mail. I was halfway through season 2. It was just taking too long for the turnaround time from Netflix. I couldn't wait any longer. I went and bought all 10 seasons on Amazon HD video at $29.99 each. I couldn't be any more happy. Best money I ever spent. I still continue to watch. Thank you Tom Welling, cast, and crew for bringing us Smallville. This show holds a special place in my heart. Highly recommend, you won't be disappointed guaranteed.
Read more
2 people found this helpful
Helpful
Comment Report abuse

rdaaamgTop Contributor: Country Music
5.0 out of 5 stars Smallville season 7 blu-ray
Reviewed in the United States on September 4, 2017
Verified Purchase
The season opens where the last season ends with Lex in a squad car on the bridge of the dam and the phantom flying away after fighting with Clark inside the dam. Lois is badly wounded but is healed by Chloe who is found dead when Lois wakes up from being healed. Clark rescues Chloe from the morgue where he learns what her meteor power is which makes him concerned for her safety. Clark is able to defeat the phantom by sending him to the zone and Lana is found in Shanghai, China. She has to have Lex's help to come back to Smallville where she goes to the farm and stays until Lex is able to get the charges dropped. Lex is saved by a mysterious woman who is released when the dam breaks and the water is released on the county and Lex is obsessed to find out who she is. Clark learns he has a cousin from Krypton and he has to teach her how to fit it not using her powers. Kara disappears after having a fight with her father in the fortress and she gets amnesia. Lex uses her to find out about Clark and turns her against him and Lana and Chloe have to take her to the fortress to get her memory back. Clark and Lana get back together when she is cleared but their relationship is strained when she keeps Clark in the dark about a foundation she started to help the meteor infected but it really is a way to spy on Lex. Chloe uses her power a few more time once to save Lex's life. Bizarro takes over Clark's life for about a month and nobody suspects anything. Clark and Bazarro have a showdown where Bizarro is destroyed by blue kryptonite. Oliver is unmasked as the Green Arrow when Canary who is working for Lex destroys all the windows in his place and Lois learns about his secret identity and leaves him. Lana is infected by Brainiac and is institutionalized. Brainiac also tries to infect Chloe but is weakened by her meteor power and Clark is about the destroy him by electrical power lines. Clark goes to see Lana but finds out she was released as soon as she woke up and left behind a videotape. Clark learns that there is a way that he can be controlled and Lex gets all the pieces and puts them together. Lex finds the fortress where he and Clark talk and Lex puts the device on the crystal and the fortress is destroyed with Lex and Clark inside. This is a great addition to the collection
Read more
Helpful
Comment Report abuse

When you put the Bluray disc in, it will go straight to the first episode. The first episode is either 4 or 4 and a half hours long, depending on the disc. All the episodes are strung together. Yes, this is stupid. In order to get to the episode menu, you have to click on the pop up menu button while the episode is playing.

The Bluray set has all of the same features as the DVD set, with nothing new added, so the only reason to get the Bluray would be for a somewhat better picture quality
Read more
2 people found this helpful
Helpful
Comment Report abuse
See all reviews

I will acknowledge that it had a few interesting ideas, such as the introduction of Kara, Clark's meeting with his mother (even if it's a clone), and the chance for Clark to do the 'It's a Wonderful Life' bit, but even such intriguing ideas as the Traveller concept don't make up for the relative let-down in terms of characterisation in this season. Bizarro goes from being a true threat in the first episode to almost a tragic monster when he returns and tries to replace Clark, and things with Clark and Lana are almost pathetic, with Clark desperately hanging on to a relationship he's spent years idealising in his mind while Lana basically manipulates Clark as part of her own plans for revenge against Lex Luthor that never really amount to anything.

The show redeemed itself after this season was over, but I truly felt that this was its weakest year.
Read more
One person found this helpful
Report abuse

F. Finch
5.0 out of 5 stars Superville
Reviewed in the United Kingdom on January 30, 2012
Verified Purchase
Well I am blown away. What an adventure. Great writing and story telling in this season. Totally love bringing SuperGirl into the fold. (Actually this is the reason why I got this set) It makes a classy springboard for Clark to get his act together and makes for greater tension in the story lines. The whole thing just opens up to fabulous possibilities. And it delivers.
This season is a real surprise for fans as it is fast passed (a bit too fast in some cases - too slow in others) and pretty non-stop driving story development. Thanks to the writing team for this.
One of the episodes is centred on photographer Jimmy Olsen, and is cute in its process, providing a good arena to show the vulnerability of his character succumbing to temptations. The only issue I have with this episode is the length of time spent on the dance floor. It became a bit of a show case but not helpful for moving the story along. In situations like this you can tell its padding the script!
But all in all this season comes to a great climax of difficulties, placing Clark in jeopardy along with the human race. You wont be disappointed.
Read more
One person found this helpful
Report abuse

Mr. A. Lawson
4.0 out of 5 stars A good season of Smallville
Reviewed in the United Kingdom on December 20, 2010
Verified Purchase
My favourite season so far was season 6, but this was entertaining all the way through. Super girl Kara Kent was a welcome addition to the cast, and another season ending jaw dropping moment will have you ordering season 8 soon after.

I have to disagree with some reviews and say the picture quality is good. TV BR always seem to have a little 'noise' on the image, this I guess because in film we send the image plates to a de-grain department that reduces that noise, I guess with TV it does not get the same treatment sadly.
Read more
Report abuse

Doolus
5.0 out of 5 stars Superman!!
Reviewed in the United Kingdom on January 5, 2013
Verified Purchase
I was missing Season 7 from my collection and found I had to have it! Any fans of Superman, Smallville is a "must see". But please do bear in mind that the series seems to veer away from some standard, established facts about Superman and his background. After the initial feelings of outrage and offence have subsided, one accepts the artistic licence and just sit's back and enjoys an excellent, well made series.
Read more
Report abuse
See all reviews