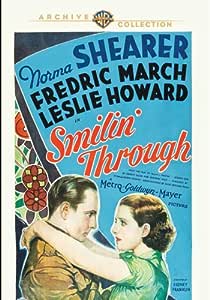 Two generations of tragic love make Smilin' Through one of the screen's great romances. The story begins in 1868 England, when John Carteret's fiancée is shot dead on the couple's wedding day by a rejected lover aiming at the groom. Flash forward to 1915, after the devoted John has raised his fiancée's niece Kathleen as his own. Kathleen falls in love with an American – the murderer's son – and the past sweeps back to haunt the present. Film legends Norma Shearer, Fredric March (both in dual roles) and Leslie Howard (whose character ages 50 years) find every tear and triumph in this Best Picture Oscar® nominee (1932-33) that is "lovely, simply lovely…an example of romantic melodrama at its best" (The Movie Guide).

4.6 out of 5 stars
4.6 out of 5
57 global ratings
How are ratings calculated?
To calculate the overall star rating and percentage breakdown by star, we don’t use a simple average. Instead, our system considers things like how recent a review is and if the reviewer bought the item on Amazon. It also analyzes reviews to verify trustworthiness.
Top reviews

Bobby Underwood
5.0 out of 5 stars A Pure Romance
Reviewed in the United States on April 5, 2005
Verified Purchase
This lushly photographed and beautifully acted film is a pure romance, and remains one of the finest films MGM made during the 1930's. Old-fashioned and unabashedly sentimental, this story of love and tragedy repeating itself a generation later would become the model MGM would use successfully for over a decade, until the innocence of the 30's gave way to WWII, and America's romantic view of love began to fade into the sunset.

Lovely Norma Shearer, a fine actress who rivaled Garbo, and was married to great producer Irving Thalberg, graced many of MGM's best productions during this period. She is marvelous in a dual role as Moonyean, and her niece, Kathleen. Fredric March, who was to his generation of actors what Montgomery Clift would become to his, two decades later, is also outstanding in a dual role. The always solid Leslie Howard completes this triangle of love and happiness snatched away tragically, in an instant, but lasting a lifetime.

The graceful and elegant Moonyean (Shearer) was to be married to John Carteret (Howard), who loved her dearly. It is an older and somewhat lost John we see as this film opens, however, his beloved Moonyean trying to reach his spirit and sooth his soul from across that river leading to the netherworld. Murdered at the alter by a jealous suitor, the only thing that has prevented John from letting the bitterness of his ill-fated romance with Moonyean completely destroy him is the arrival of Moonyean's niece, Kathleen, at the age of five. John raises her as his own after the death of Moonyean's sister.

Shearer is subtle and wonderful in contrasting the elegance of Moonyean with the vibrance of the sexy Kathleen, while at the same time her appearance and her fate begin to mirror a tragic past. When Kathleen meets and falls in love with a young soldier named Kenneth (Fredric March), bound for the front in WWI, only his last name can stand in the way of their happiness.

The story is involving and the soft-focus black and white photography adds a richness to the echos of fate being played out. Moonyean must somehow reach John and touch his heart before Kathleen loses her happiness with Kenneth, and John's spirit is so cold he will not be able to join his lover, Moonyean, even in death.

This old-fashioned and sensitive romance fills a void left by modern films, and is a reminder that a love story should be about love. You probably don't own a film of this nature and will certainly want to pick this one up. It is proof there is still a place for both romance, and romantic love in the movies.

Jane H. Otoole
5.0 out of 5 stars 5 stars
Reviewed in the United States on February 16, 2016
Verified Purchase
what a great product of the MGM dream factory! If I were a moviegoer in 1932, I honestly believe Norma Shearer would have been my favorite actress. and having read a lot about her, she really willed, dieted and exercised herself into stardom, and probably would have succeeded even if she hadn't married the boss (Irving Thalberg). but determination isn't enough, she knew her craft, her effects, and when her character is in tears, they seem truly genuine. Half the battle is having costars of quality, and you can well understand either generation of Norma's character falling hard for Leslie Howard or Fredric March. Somehow this ridiculous, improbably plot was captivating.
Read more
6 people found this helpful
Helpful
Report abuse

Amazon Customer
4.0 out of 5 stars Superb post WWI movie. Frederick March, Leslie Howard and Norma Shearer are all in top form.
Reviewed in the United States on March 11, 2020
Verified Purchase
Movies in the 1930s and 1940s were superb, and this is one of the best. In the style of the era, it is a bit melodramatic, but that gives it all the more historical charm.
Read more
Helpful
Report abuse

Victoria R.Remington
5.0 out of 5 stars Have plenty of kleenex when you watch this film!
Reviewed in the United States on May 28, 2014
Verified Purchase
It is a real tear jerker,the music,the different scenes can be delightful one minute and the heart breaking the next..who ever made this film was a genius....but don't think that the 1941 remake of this..is any better...it is ok..in it's own right I guess...but this is in my opinion the far better of the 2
Read more
4 people found this helpful
Helpful
Report abuse

Allyson K. Hathcock
5.0 out of 5 stars the greatest escapist romance ever filmed!
Reviewed in the United States on February 23, 2008
Verified Purchase
this is one of my very favorite movies! The whole cast is wonderful! Since everyone has already raved about Norma and Frederick's performances, I'm going to rave about Leslie's. There is a scene, in the flashback, where we see the night before the fatal wedding. John and Moonyean sneak away and have a lighthearted, romantic conversation. The dialogue may sound corny coming out of someone else's mouths ( "wouldnt it be wonderful if every time I opened my eyes, you were there?" or "after tonight, there'll be no more partings, no more goodbyes, will there my sweet?") but coming from Leslie Howard and Norma Shearer's mouths, we dont cringe. In fact, we all sincerely go "AW!" he is so adorable in that scene, that when Moonyean is shot, and he is holding her and we see the depths of despair and anguish in his eyes, our heart breaks for him!

He is equally fabulous as the older John- a bitter, yet affectionate uncle who still is haunted by his lost love. One watches this film and believes in it so whole heartedly, that it makes one want to just jump right into the period!

If you enjoy romance, happy endings, and a good tear jerker, then this is it! This movie has comedy, pathos and above all HEART!

Maribeth Brinson
4.0 out of 5 stars Good, solid movie!
Reviewed in the United States on April 3, 2014
Verified Purchase
This movie was first filmed in 1922 from a play by Jane Cowl and Jane Murfin. Two of the three leads play different characters in different eras. Norma Shearer had the interesting role of Moonyeen, who appears in spirit to the man she loved in life and also her niece Kathleen. I wish the price was better, a bit expensive, but I think the three leads are all pros and do a wonderful job with this unusual story and I was ready to pay the price, so I could watch it whenever I felt like it. It was remade in color, different cast, in 1941, but it doesn't need color to be interesting and this film, I feel, is the better of the two.
Read more
5 people found this helpful
Helpful
Report abuse

graham
5.0 out of 5 stars get your hanky ready
Reviewed in the United Kingdom on June 10, 2020
Verified Purchase
they don't make them like this any more 4x3 format fairly good picture for the age of the film 1932.
brilliant acting by all have a hanky ready. Graham. ps my mother always wanted to see this film my only regret is that i could not obtain it while she was alive.
Read more
Report abuse

Paul
5.0 out of 5 stars Lovely romantic stuff!
Reviewed in the United Kingdom on August 5, 2018
Verified Purchase
If you like good old romance, with a touch of spookiness, this is one for you. It started off as a play, inspired by a song. There was an earlier, silent, version, and a later version with Janette MacDonald. In the 1970's, John Hanson wrote and starred in a stage musical version of it. It's a bit of a silly story, if you stop and think about it, so just enjoy the acting and the romance!
Read more
Report abuse

william hebborn
4.0 out of 5 stars Four Stars
Reviewed in the United Kingdom on May 21, 2016
Verified Purchase
ludicrously romantic, and redolent of a sensibility long gone. Worth the ticket price.
Read more
Report abuse

Carole
5.0 out of 5 stars top film
Reviewed in the United Kingdom on February 18, 2015
Verified Purchase
Great film for my 91 year old dad who loved this film when he was young.
Read more
2 people found this helpful
Report abuse

Page 1 of 1 Start overPage 1 of 1
Previous page
Next page
Pages with related products. See and discover other items: leslie howard