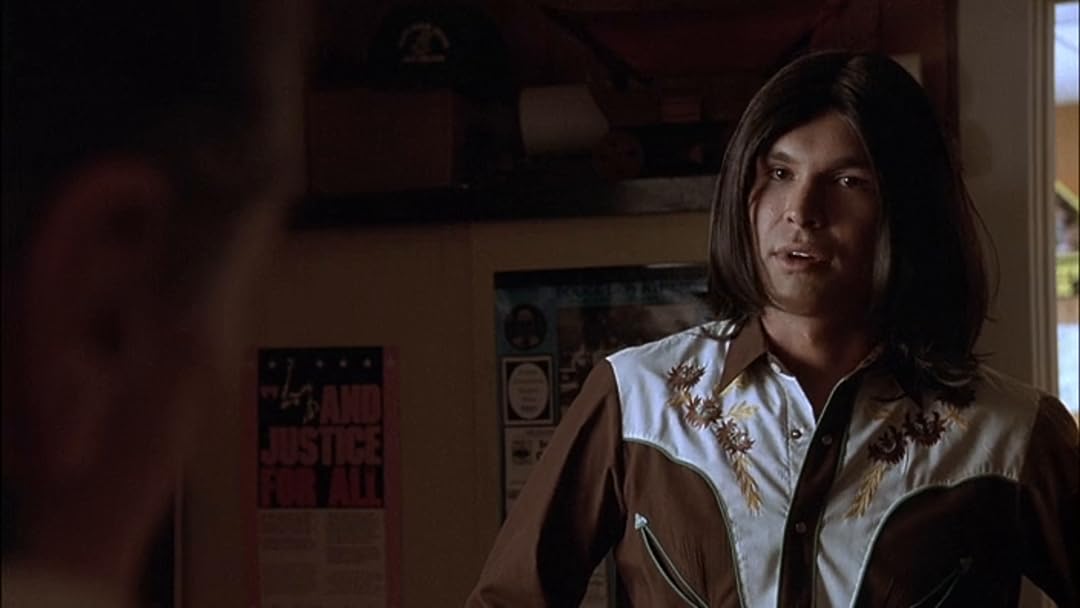 (3,916)7.21 h 29 min1998PG-13
Though Victor (Adam Beach, Flags of Our Fathers) and Thomas have lived their entire young lives in the same tiny town, they couldn't have less in common. But when Victor is urgently called away, it's Thomas who comes up with the money to pay for his trip.

Mr RussellReviewed in the United States on November 27, 2019
5.0 out of 5 stars
If you don't get the backwards driving car, you probably won't get anything else about it
Verified purchase
Heeeey, so this one time, a guy who wasn't really an Indian but who lived over by the rex decided to write a book about rez life, and it was so good, all the Indians bought it, and because the Indians were buying it, white people started buying it, and then hollywood bought it and made it into a movie, and everything was really great and the guy who wasn't an Indian but who used to live over by the rez sold lots of books and made a good life for himself, until somebody pointed out that he wasn't an Indian, and suddenly he was doing cultural appropriation and profiting off of the Red Man(tm)'s experiences and suffering, and the message of all of those books was lost because he wasn't Indian enough. And it's true that no Indians made any money off of those books, except for the actors who were mostly just happy not to have to wear feathers and say "How" like back in the day when John Wayne never smiled or showed his teeth, but it was still a pretty true story about how life on the rez is, and that story is just as relevant when its being told by a person of whiteness as it is if it's told by an Indian, but Heeeey, that's another story, innit?
37 people found this helpful

prisrobReviewed in the United States on June 6, 2017
5.0 out of 5 stars
It's A Good Day To Be Indigenous!
Verified purchase
Oh, how I loved this film. It is more than a good buddy film or an on the road film. This is a getting to know you, my father and my family film.

As the film begins in Idaho, on an Indian Reservation, it is the Fourth of July, 1976. This is the day, baby Thomas Builds-the-Fire, is saved by being thrown from an upper window when his house burns down in the middle of the night. He is caught by Arnold Joseph, played by Gary Farmer, a drunk neighbor who is eventually thrown out by his wife, Tantoo Cardinal. He leaves his son, Victor Joseph, played by Adam Beach, who is the love of Arnold's life. Off he goes to live in Phoenix.

When Victor becomes a young man, his mother is notified that Arnold has died, and someone should come and pick up his things. Mom only had $40, but Thomas, the know it all and talks all the time, has money, and he offers it to Victor, if Thomas can accompany him on the adventure. Off They Go, and what an adventure they behold. The native Americans are still not looked at as they should be, but these two behave on the way to Phoenix. In Phoenix they meet Arnold's friend, a lovely young woman. Victor filled with righteous anger and Thomas a free spirit find the world.

This was such a well developed film, superb acting, wonderful writing and directing, a joy to watch. Not maudlin nor sad, but filled with some very humorous scenes. Two young men with not much in common, find themselves, and give us an excelkent film.

HistoryBuff335Reviewed in the United States on October 16, 2017
5.0 out of 5 stars
Love It!!
Verified purchase
This is among my top 10 favorite movies. I've owned a VHS copy of it for many years and just recently purchased the DVD. I do not know how many times I've watched and am always on the look-out for other similar Native American produced films. I am non-native but feel I understand a good deal of what is going on in the film - I've been trying to learn as much as possible about NA's since I was a child and later took several NA studies classes at University (thankfully with NA professors), have read innumerable books, worked with several NAs as an Archaeology Tech, and took care of a few sick and injured as a nurse.

IMO there are many things any viewer can take away from this film. Though there are elements specific to the NA experience in America and their culture(s), we all share a common humanity that is relatable to us all. Those of Euro-American extraction might feel a few stings of reality from the frequent ribs, which we should. As a few other reviewers mentioned, the description on the case labeling the movie a "comedy" is completely silly. It has several very funny moments but these are also mixed with a lot of pain, heartache and inner struggles. Many of us have had similar problems coming to terms with how we feel about our fathers and how/if we could forgive them; many have experienced similar periods of love and loss, alcoholism, family discord, etc.
17 people found this helpful

TwoCentsReviewed in the United States on November 25, 2016
5.0 out of 5 stars
Great Comic Tragedy
Verified purchase
The first time I saw this movie, it made me laugh so hard! I thought of it as a comedy. But after watching again, years later, I saw it as a tragedy. The more I watch it, the more I realize that this movie is really deep. It is funny. The characters are interesting and delightful. But the underlying story is so sad. This movie is fascinating. I thought they could have done a better job with the scene of the accident. The intensity between Victor and the husband seemed forced. And I hope that was a wig after Victor chopped his hair cause it was fake looking and ugly. Other than that, I love this movie! It proves that all struggles are basically human struggles that we all have in common, although unique in the way they are experienced. The reservation culture is intriguing.
14 people found this helpful

N. TrimbathReviewed in the United States on December 22, 2017
5.0 out of 5 stars
A great film.
Verified purchase
Great Film. It is a favorite. A great story and a powerful message for anyone who has dealt with poverty, and the broken heart of a father's hurtful behavior. It is a film based on a poem and great writing therefor it is a work of art. If you have attention problems or are looking for Adam Sandler's banal humor - you won't appreciate this film. If you want to see a work of art made to truly move your soul - this is an awesome film.
12 people found this helpful

Lisa M. MonteiroReviewed in the United States on January 5, 2017
5.0 out of 5 stars
A heartwarming story
Verified purchase
We watched this movie with our first daughter maybe 15 years ago when she was about 9 or 10 & loved it so much, we watched it again. Now, after all this time, bought it and watched it with our 2nd daughter, who is 15.

It's a wonderful story about how 2 young boys, forever linked together by tragedy & growing up differently - one a storyteller & the other a cynic, find common ground as they take a road trip to bury the cynics father, who abandoned the family a long time before. It may move slowly for some, but I found it both humorous & inspiring
19 people found this helpful

Amazon CustomerReviewed in the United States on June 14, 2020
4.0 out of 5 stars
The story
Verified purchase
Before watching this film, I had a rough understanding of Native Americans and how they lived in a modern setting. I am not Native by any means, but I enjoyed this film because it was more real then fiction. The film shows a story that could be real, and it was a journey between two men finding their own peace. The representation of the Native people in this film was interesting since many people have misconception about Native people even in modern times. This film throws all those misconceptions away and even makes some hilarious jokes about these misconceptions that end up creating good humor out of them. The Media has an interesting way at transforming the idea of what “Indians” are and how they should act but this film shows a realistic take on Native American’s life and creates a beautiful story based off of the “coming of age” genre. Overall this film is a classic for a very good reason, because its something that redefined the misconceptions and was made by Native Americans that knew what story they wanted to tell and how to tell it. It wasn’t based off all the wrong pieces of ideals that the Mass media of yesteryear created or the stereotypes of the modern era. It’s a good story that can be experiences no matter the era you live in.
2 people found this helpful

SarahReviewed in the United States on August 21, 2021
1.0 out of 5 stars
Stereotypical, bad movie
Verified purchase
Overall this film portrayed native americans in the same stereotypical ways. As if they all have broken, abusive families, eat fried bread, and are uneducated. I should've known that half of the time when a movie has a high rating on Amazon it's really actually trash😖.Not to mention another great downside is.... Adam Beach's hair. It was fine at the beginning of the film, you know he's a cute guy, but then he cut it. But not fully?!?!? 😣So he looks like a girl ?!?!?That made no sense at all. And his mother didn't say anything at all when he returned home, which was very unrealistic as to how a mother would react to any change in her child. In various cultures a sign of mourning or upset is signified with shaving one's head or cutting one's hair, but that was not at all portrayed properly. It should've been cut much shorter than that !!!
See all reviews
Back to top
Get to Know Us
Make Money with Us
Amazon Payment Products
Let Us Help You
EnglishChoose a language for shopping. United StatesChoose a country/region for shopping.
© 1996-2021, Amazon.com, Inc. or its affiliates