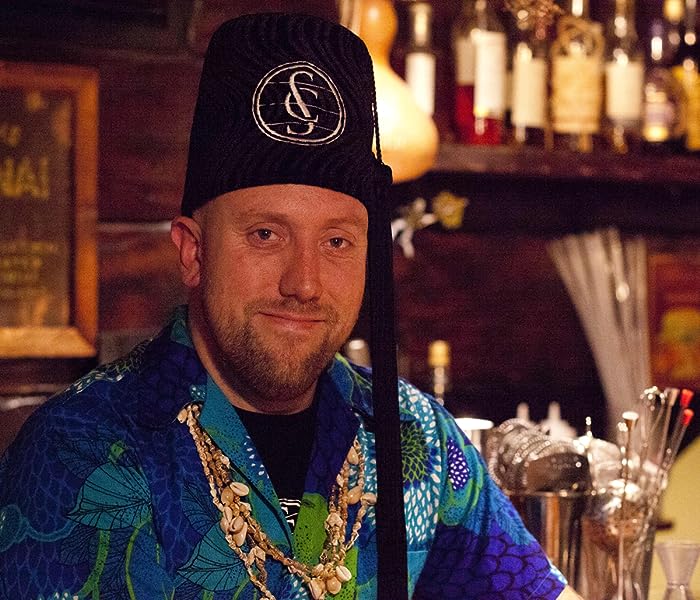 "Martin and Rebecca Cate are alchemists—Reyn Spooner–wearing, volcano-bowl-igniting, Polynesian-popping, double-straining, Aku-Aku swilling alchemists. Which is to say, they are the finest kind of alchemists known to walk the earth. Buy this book. It will bring you a little bit closer to paradise.”
—Wayne Curtis, author, And a Bottle of Rum: A History of the New World in Ten Cocktails

“With Smuggler’s Cove, Martin Cate did the impossible, folding up a whole rum-soaked sailing ship so that it would fit into a not-very-large San Francisco storefront. Now he’s done it again, and taken that tiki bar--one of the very finest bars I know—and folded it up so it fits between the pages of a book. Just add rum, and watch Smuggler’s Cove—and the whole vibrant, geeky, just a little bit unhinged world of tiki it so perfectly exemplifies— unfold in your lap.”
—David Wondrich, author of Imbibe! and Punch

“Tiki is simultaneously whimsical and sincere, simple and shockingly complex, which means understanding it can be challenging. This indispensable book explains it all—and is the definitive volume on one of the cocktail world’s most fascinating and complex genres. But in the end, tiki’s essence is based on captivating stories and exotic drinks, and Martin Cate’s Smuggler’s Cove is a tour de force in both.”
—Jordan Mackay, wine and spirits writer, and coauthor of Secrets of the Sommeliers

“Martin Cate understands tiki like few others do. He not only knows how to ask the right questions; in this book, he also answers many questions that I didn’t know I had. The old guard of Donn, Vic, and Steve can rest easy now that they have this champion of their tradition bringing tiki into the new millennium.”
—Sven Kirsten, author of The Book of Tiki, Tiki Modern, and Tiki Pop

“Here at last are the secrets behind one of the world’s best bars. The Cates have written an engaging, knowing, and personal book that is sure to please tiki lovers, cocktail lovers, and especially tiki-cocktail lovers. Abandon angst, all ye who enter here: like Smuggler’s Cove itself, these pages take leisure time very seriously.”
—Jeff “Beachbum” Berry, author of Potions of the Caribbean

“Martin Cate is an authority on rum, and this book will take your level of understanding of this noble yet complex spirit to a new level. Martin offers his own illuminating rum classification system, and also tackles controversial topics head-on, such as sweetening and the use of nebulous age statements. An absolute must-have for rum enthusiasts.”
—Richard Seale, master distiller, Foursquare Rum Distillery, Barbados

“The twenty-first-century revival of tiki cocktails was spearheaded by a handful of passionate tiki-geeks, Martin Cate among them. With Smuggler’s Cove, Martin and Rebecca teach you everything you need to know to become a tiki-geek in your own right—and to see the world with their Polynesian passion.”
–Gaz Regan, author of The Joy of Mixology and The Negroni

“Tiki culture is enmeshed with rum, and the authors offer a master class on it, covering its history and many varieties, as well as digressions on coring pineapples for cocktails and where to score cocktail umbrellas. It’s a terrifically fun and informative read, and the definitive resource on the topic.”
– Publishers Weekly, Starred Review

“The book walks readers through the history of tiki, as well as 100 recipes for cocktails. Not sure where to start with rum? There's a beginners' guide. There are also party tips, garnishing guides, and much more. In other words, all you need are some paper umbrellas and your summer is made.”
– Epicurious

“Happily, the modern tiki era now has its own Magna Carta …. It’s a lavishly illustrated, seriously researched, 350-page tome with more than 100 recipes, along with a well-written history and sketches of some of the lesser known tiki lights . . .”
– The Daily Beast

"Martin and Rebecca Cate have managed to create an irresistible shrine to the magic of Polynesian pop culture. Beautifully designed and dripping in kitsch by way of photos by Dylan + Jeni, this is set to be the cocktail book of the summer."
– Punch

"With more than 100 recipes, both classic and modern (including homemade grenadine and coconut cream, of course), Smuggler's Cove is for anyone who appreciates the beauty of tropical drinks and wants to dig in deeper. A primer on essential tiki techniques as well as a thorough, authoritative guide to rum take you further than the typical booze book."
– Saveur

"Martin Cate is a scholar of tiki, and this long-anticipated cookbook is a respectful (and even academic) glimpse into that culture. . . . Smuggler’s Cove isn't just a book of recipes—it's a guide on how to transplant a beloved bar into your home."
– Epicurious

"A lively exploration of our country's drinking history (and the current tiki scene), it's essential reading for rum lovers, offering the best categorization of the headspinning-ly diverse spirit that I've encountered."
– Serious Eats

MARTIN CATE is a rum and exotic cocktail expert and the owner of Smuggler’s Cove in San Francisco. Smuggler’s Cove opened in 2009 and has been named one of the World’s 50 Best Bars (Drinks International, 2011, 2012, 2013, 2014, and 2015), 50 Best Bars on Earth (The Sunday Times, London), Top Ten Food and Beverage Concepts of the Last 25 Years (Cheers Magazine), 13 Most Influential Bars of the 21st Century (Liquor.com), and America’s Best Bars (Playboy, 2012 and Esquire, 2013). Smuggler's Cove was also awarded Best American Cocktail Bar at the 2016 Tales of the Cocktail Spirited Awards. A member of the United States Bartenders Guild (USBG), Martin conducts educational seminars and adjudicates rum and cocktail competitions across the United States, Europe, and the Caribbean. In 2015, along with partners Alex Smith and John Park, Martin opened Whitechapel in San Francisco to bring the same passion for history and craft to the world of gin. He is also the co-owner of Hale Pele in Portland and a partner in Lost Lake in Chicago and False Idol in San Diego.


In 1999, REBECCA CATE inadvertently fueled Martin’s madness by famously uttering words (which she thought were a joke) about making a spare bedroom a home tiki bar. Since then, however, she too has been swept up in the tiki fantasia, first as an enthusiast, then helping Martin open and run Smuggler’s Cove, while juggling a full-time career as a research psychologist “on the side.” Rebecca earned her PhD in personality and social psychology from The University of California at Berkeley in 2006, and has spent over a decade leading large-scale studies of behavioral health interventions as well as topics related to retirement and longevity. The opportunity to coauthor this book has allowed what had been just a weekend and vacation escape to turn into a full-time journey.

Part One: An Invitation to Escape
The Birth of Tiki 23
The Golden Era 47
The Tiki Revival 71

Part Three: The Spirit of Rum
Rum Through the Ages 149
Understanding Rum 183


The Tiki
The word tiki originated in New Zealand and the Marquesas Islands, where it can refer to a carving of a first man, a god, or a symbol of procreation depending on which culture it originated from. But eventually, mainland Americans appropriated the word to describe any Polynesian carving with a largely human form, exaggerated features, and a menacing visage. What’s more, mainlanders started carving the tikis themselves, occasionally with an eye to their South Pacific origins, but more often with a “whimsical and naïve attitude toward another people’s extinct religion,” as historian Sven Kirsten puts it. These artists were inspired to add their own flair and style to the carvings. Thus was born a new kind of tiki whose provenance lay in many lands and imaginations, and would later become a tenet of Polynesian Pop.

Open the door to paradise with this 1930s treat from the famous House Without a Key on Waikiki Beach.

Combine all the ingredients in a cocktail shaker with cracked or cubed ice. Shake and double-strain into a chilled coupe and garnish with an edible orchid on the edge of the glass.
Read more

Page 1 of 1 Start overPage 1 of 1
This shopping feature will continue to load items when the Enter key is pressed. In order to navigate out of this carousel please use your heading shortcut key to navigate to the next or previous heading.
Back
Next
Pages with related products. See and discover other items: economics of tourism, food industry, california beaches, australian travel, street food, Explore tiki cups for parties