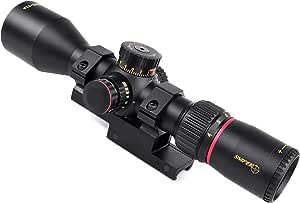 Visit the Sniper Store
4.5 out of 5 stars 29 ratings
| 4 answered questions

4.5 out of 5 stars
4.5 out of 5
29 global ratings
How are ratings calculated?
To calculate the overall star rating and percentage breakdown by star, we don’t use a simple average. Instead, our system considers things like how recent a review is and if the reviewer bought the item on Amazon. It also analyzes reviews to verify trustworthiness.

J Zulu
1.0 out of 5 stars Go with Bushnell, Nikon, or even Weaver!
Reviewed in the United States on February 26, 2020
Verified PurchaseEarly Reviewer Rewards(What's this?)
I purchased this scope to mount on a rifle that I rarely use. Figured that I didn’t need to go with a high end optic for a rifle that I used for target shooting (100-200 yards) and on that rare occasion for a varmint hunt. I did the research and instead of going with a Bushnell, Nikon, or even a Weaver, I thought I’d try something new and not already in my inventory. I settled on this Sniper 3x9x40. The price was right and the few reviews that it had were positive. I looked the brand and type of scope up on Youtube and found only one video review of this particular scope (that should have been a clue). The review was informative, but hardly comprehensive. Be that as it may I took a chance and thought it would be fine for my application.

The box it came in was very plain (white) with very little markings. The scope was well packaged, with ample cushioning, and wrapped in plastic. Scope rings were situated on either side of the scope tube and not wrapped. I closely inspected the rings and found that there were several dings and small scratches on the top half of the rings in and around the screw slots. Additionally, the screws appeared used. Those were small blemishes that I could overlook. However, the nut on both rings were visibly marred and scratched as if they were tightened or loosened with a pair of pliers. Very disconcerting. I knew I would not be using them.

I closely inspected the exterior of the scope, starting at the ocular lens through to the objective lens. The scope is a 3 X 9 variable. The variable dial on the ocular bell does not aligned precisely with the center line axis of the scope. It was off set several millimeters to the right which, in and of itself, is not a fatal flaw, but it goes against the claims and advertisement that it is a “precision” instrument. The dial moves very nicely and the zoom aspect is excellent. The tube had slight ware marks where rings would normally be placed. Evidently this scope was used. The elevation and windage turrets look good and are well constructed. The manipulation of the turrets is easy and crisp with every adjustment. The zero stop rings work well. Objective bell was unremarkable. Both scope caps were sturdily made and are fitted, with groves on the inside, to the dial groves on both the ocular and objective bells. The glass was clean, clear, and unremarkable.

Looking through the glass, it appeared very clear and seems to let in a lot of light. The 3x9 zoom worked very well and was very precise.

The reticle…is awful. The description claims this reticle to be a mil-dot. The mil-dots are so small and so close together, from top to bottom and from left to right, that the distance from on mil to the other is very difficult to distinguish. It would have been better to have a duplex reticle. Definitely not to be used for range estimation. Not happy at all. Activation of the illumination (Red, Green, and Blue) is easy enough, but there is so much light bleed over that you see it reflected on and off of the inside tubing and bells. Awful and distracting. I have not mounted this scope yet or used it on the range so I can not speak as to application performance, but at first blush it gives credence to the saying “you get what you pay for.” This may be a great scope when in actual use, but I don’t have as yet a favorable overall impression.

Not very professional work here. At least Bushnell, Weaver, Nikon, and several others, take pride in their products, even the budget products.

Matthew Herrmann
5.0 out of 5 stars 4.9 *’s
Reviewed in the United States on June 28, 2020
Verified Purchase
Awesome scope and pin point accuracy...description, however, was a little off...it stated...”green, red, blue optic sights...”...there was no BLUE, just red and green, but that was easily forgivable due to how it performed! Likely just a typo...if your like me and you prefer a blue setting for scope, just know it doesn’t have that feature. Other than that I’d def say 5 stars all around, esp for the price!
Read more
2 people found this helpful
Helpful
Report abuse

hunter71
5.0 out of 5 stars Extremely professional and extra satisfactory contact with the seller. I fully satisfied.
Reviewed in the United States on March 5, 2021
Verified Purchase
Sniper ffp. 4x16x44 mounted on my Tikka T3 Lt. Perfec combination . Great picatinny mount completely professional. Exelent scope in a couple week I’ll go to the range and sight it in.
Read more

5.0 out of 5 stars Extremely professional and extra satisfactory contact with the seller. I fully satisfied.
By hunter71 on March 5, 2021
Sniper ffp. 4x16x44 mounted on my Tikka T3 Lt. Perfec combination . Great picatinny mount completely professional. Exelent scope in a couple week I’ll go to the range and sight it in.
Images in this review

lamont wright
5.0 out of 5 stars Clarity of it
Reviewed in the United States on June 9, 2020
Verified Purchase
Attached to air rifle
Read more
2 people found this helpful
Helpful
Report abuse

Connie
3.0 out of 5 stars So far good scope
Reviewed in the United States on December 10, 2019
Verified PurchaseEarly Reviewer Rewards(What's this?)
Put it on the wife's AR10 for hunting
Read more
One person found this helpful
Helpful
Report abuse

Tayson
4.0 out of 5 stars Great
Reviewed in the United States on January 7, 2020
Verified PurchaseEarly Reviewer Rewards(What's this?)
Loved how the sight looks
Read more
One person found this helpful
Helpful
Report abuse

Page 1 of 1 Start overPage 1 of 1
Previous page
Next page
Pages with related products. See and discover other items: Lens Shades
Back to top
Get to Know Us
Make Money with Us
Amazon Payment Products
Let Us Help You
EnglishChoose a language for shopping. United StatesChoose a country/region for shopping.
© 1996-2021, Amazon.com, Inc. or its affiliates