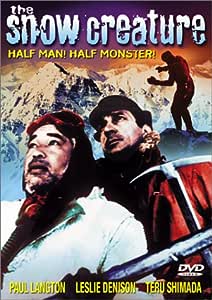 Legends of a prehistoric creature, the link between man and beast, send American scientists on an expedition through the Himalayas. Their search for the Yeti leads them on a treacherous path through the mountains as the creature sets brutal traps to halt their pursuit. During a tense showdown deep within a cave, the team is able to capture one of the beasts. When the Yeti is brought to Los Angeles, the enraged monster breaks free from his cage. Striking from the concealment of the sewers, the beast unleashes his fury on the city. Acts of menace and destruction multiply as the police attempt to subdue the creature. Their pursuit leads to a violent confrontation with this bestial ancestor of man.

2.9 out of 5 stars
2.9 out of 5
41 customer ratings
How does Amazon calculate star ratings?
Amazon calculates a product’s star ratings based on a machine learned model instead of a raw data average. The model takes into account factors including the age of a rating, whether the ratings are from verified purchasers, and factors that establish reviewer trustworthiness.
Top Reviews

Robert I. HedgesTop Contributor: Pets
HALL OF FAMETOP 1000 REVIEWER
2.0 out of 5 stars Adventures in Bipedal Locomotion!
Reviewed in the United States on March 12, 2004
Verified Purchase
'The Snow Creature' is one of the most boring movies that I have ever seen. The film has a terrible script, incredibly inept editing (and the print itself is in rough shape), horrible acting, and a Yeti with an obvious case of mange. The first 45 minutes or so of the film you see a couple of American scientists and their guides wandering around the Himalayas, and when I say wandering, that is almost all you see...men walking around. They walk up hills! They walk down hills! They walk on level terrain! It is quite an adventure, indeed.
They finally find the Yeti, which will make you laugh with his ferocious muttonchop sideburns and afro. Of course they decide to take a cue from every escaped monkey movie ever made and transport him (in a custom made refrigerator!) back to Los Angeles, where he terrorizes the greater Los Angeles sewer system for the last twenty or so minutes of the movie. Returning to his earlier thematic device, Director W. Lee Wilder takes tedium and boldly mixes it with unscariness by featuring, yes, you guessed it, MORE walking around, this time in the sewers. I am curious how much of the 69 minute running time of the film is shots of guys walking around. I thought about re-watching it and timing this, but that would be too insufferable, so I offer this estimate: 55 minutes or so are exciting walking around shots. Comically, the Yeti escapes while it is detained at LAX by an alert INS official (!) who is trying to correctly ascertain his immigration status! If only the INS was so thorough today!
I gave this thing two stars, but it probably deserves about one and a half stars. There are a few amusing campy moments in here, but not enough to make the pain worthwhile.

Dennis hodor
5.0 out of 5 stars Yeti
Reviewed in the United States on December 20, 2019
Verified Purchase
I really liked this movie one of my favorites
Read more
Helpful
Comment Report abuse

Jero Briggs
2.0 out of 5 stars Terrible movie!
Reviewed in the United States on May 10, 2014
Verified Purchase
I loved Hammer's "The Abominable Snowman" film that came out a few years after this, but this film even sounded better so I bought it... that was a mistake. The film was almost dreadful. The only good stuff in the film was towards the end. The film had a good concept, but was terribly executed. The acting was dreadful, and so were the special effects. The yeti wasn't even that scary. The characters had very little characterization, and the second half of the film didn't even have the same characters in it that were in the first half. For a 70-minute movie, it seemed to drag on forever. And just when the film finally starts to get exciting, it ends.

All in all, I was not overly impressed with it. Not Recommended!
Read more
3 people found this helpful
Helpful
Comment Report abuse

T. Dascoli
2.0 out of 5 stars Oh, what could have been!
Reviewed in the United States on December 18, 2014
Verified Purchase
This movie scared the beegeezes out if me when I was a little kid but to see it now, well it's pretty bad. Although I can see why it scared me. It's reall to bad because the premise of this movie is very good. If the same money had been spent on it that was spent on like say,The Creature From the Black Lagoon, it would have had possibilities! I'm sure a remake is out of the question. Modern movie bigfoot, sasquatchs, and yetis are portrayed more like giant werewolves with big fangs and long sharp claws. Nothing like what the "real" thing is supposed to be, a big man-ape creature. When you watch this you can see what could have been, and unfortunately what will probably never be ... a really GOOD The Snow Creature movie!
Read more
2 people found this helpful
Helpful
Comment Report abuse

The Starosta of Isborsk
4.0 out of 5 stars Four Stars
Reviewed in the United States on March 5, 2017
Verified Purchase
Typically above average sci-fi from the 50's
Read more
Helpful
Comment Report abuse

Johnnybluetime
2.0 out of 5 stars Watchable.
Reviewed in the United Kingdom on April 8, 2008
Verified Purchase
This dvd is released through Alpha Video and, as seems to be usual with Alpha, appears to be a straight transfer from a vhs tape, so,given that this was a low budget movie in the first place,the picture quality is not great and is occasionally pretty awful.This is also true to a slightly lesser extent with the sound.

On the upside the actors/people playing the sherpas do at least look like they or their ancestors come from somewhere in the general region.Like China, for example.There is also a good deal of location shooting,although more likely in the Sierra Nevadas than the Himalayas, with a fair bit of real snow scattered about.On the down side our first real sight of the yeti is what appears to be a large fur glove sticking out of a pile of cardboard rocks.

It was directed by Billy Wilder's brother and,although Billy seems to have got the lion's share of the talent,it does show some ability and,through its extensive use of location shots,some originality.
Read more
Helpful
Sending feedback...
Thank you for your feedback.
Sorry, we failed to record your vote. Please try again
Report abuse

markus
3.0 out of 5 stars old b movie
Reviewed in the United Kingdom on February 15, 2014
Verified Purchase
cheap and cheerful horror of 50's bits of film bit dim and jumpy but worth the money 99p so can't grumble ok story and actors ok but like these old flicks
Read more
One person found this helpful
Helpful
Sending feedback...
Thank you for your feedback.
Sorry, we failed to record your vote. Please try again
Report abuse

Page 1 of 1 Start overPage 1 of 1
This shopping feature will continue to load items when the Enter key is pressed. In order to navigate out of this carousel please use your heading shortcut key to navigate to the next or previous heading.
Back
Next
Pages with related products. See and discover other items: snow white movies