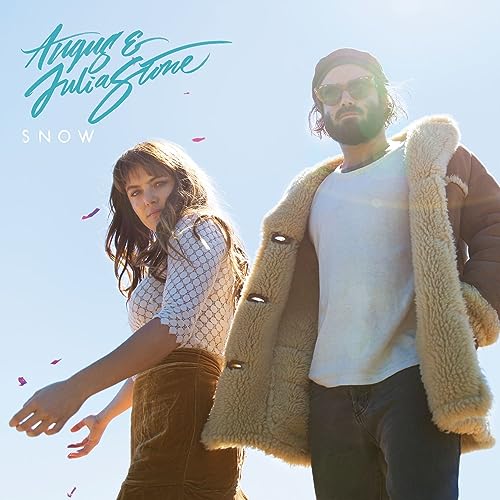 Angus & Julia Stone
September 15, 2017
4.5 out of 5 stars 141 ratings
See all 3 formats and editions Hide other formats and editions
Buy the CD album for $12.98 and get the MP3 version for FREE.&nbspCD album ships from and sold by Amazon.com. Terms and Conditions. Does not apply to gift orders. Complete your purchase of the CD album to save the MP3 version to your Music Library.

4.5 out of 5 stars
4.5 out of 5
141 global ratings
How are ratings calculated?
To calculate the overall star rating and percentage breakdown by star, we don’t use a simple average. Instead, our system considers things like how recent a review is and if the reviewer bought the item on Amazon. It also analyzes reviews to verify trustworthiness.
Top reviews

M. Northuis
3.0 out of 5 stars Laughable lyrics from a duo that has done better....
Reviewed in the United States on December 31, 2017
Verified Purchase
I was introduced to A & J Stone via Angus' Broken Brights album--an overlooked gem in the
vein of Neil Young perhaps--well written and also reveals it's strengths though repeated
listening. I bought a Julia Stone album shortly after and was disappointed in the writing
and her childlike voice really grated on me after a while....
Their previous self titled album had some decent songs, Death Defying Acts, Little Whiskey
and Crash & Burn, but Snow has few memorable songs with the exceptions of Oakwood
and Cellar Door. Basically the writing, for anyone who actually listens to lyrics (and reads literature
in general) is quite laughable--not that pop music is known for great literary accomplishments.
Even by pop music standards these lyrics are real yawners and head-scratchers. For siblings to
sing duets as yearning lovers has a bit of a yuck factor but even if you overlook that how many
times can you listen to repeated incantations about "your house, my house", and "wait for me"
before you shut your music delivery system down or just put on some other music....? I know I
am a tough music critic, I have been listening to new music for 50+ years and am open to anything
that rises above the flavor of the month and exhibits some skill, intellect and soul..this album is
quite pedestrian for the most part, if you have nothing to say about your life that is actually interesting,
make up something, become a surrealist, a word associating poet-- who really cares,
other than you, if you get laid or not? How about a solo follow up to Broken Brights?
Read more
2 people found this helpful
Helpful
Report abuse

Clayton Spires
3.0 out of 5 stars Disappointing albumn
Reviewed in the United States on August 28, 2018
Verified Purchase
Weak effort from a favorite brother/sister duo.

Sadly I'm afraid this one was a rush to complete, this album is not nearly as thought out as their previous work.
They may be tired of working together because some of the magic appears to have vanished.
Read more
Helpful
Report abuse

Leonard F. Grusk
5.0 out of 5 stars Album of the Year!
Reviewed in the United States on October 10, 2017
Verified Purchase
Album of the Year (for me anyway!). Every song has depth and has a beautiful haunting quality. Buy it and judge for yourself.
Read more
2 people found this helpful
Helpful
Report abuse

Sabrina Beevor
1.0 out of 5 stars Love this record but its 45rpm!!!
Reviewed in the United Kingdom on December 26, 2020
Verified Purchase
Bought this as a gift expecting it to be for 33, 1/3 record players (which all vinyl albums normally are for top decks) but this is done at 45rpm with nothing to tell you at the point of sale or even on the record itself. Everything in slow motion and Angus and Julia's voices have gone down by about 5 octaves.

Very disappointed Amazon as I spent a lot of money on this and assume I can't take it back because I've already opened it. Or I have to spend even more on a converter belt for my record player.
Read more
Report abuse

matt
4.0 out of 5 stars Hmmmmm, magic
Reviewed in the United Kingdom on March 18, 2018
Verified Purchase
Good , but not nearly as good as the rick Rubin produced last cd , but it couldn’t be as they used the best session musians in the word but this is a grower ,love it ,buy it
Read more
Report abuse