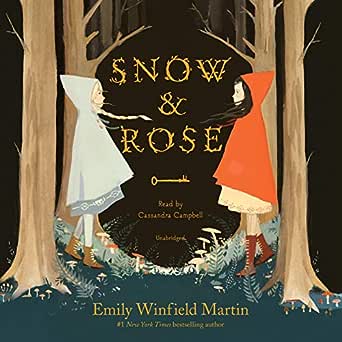 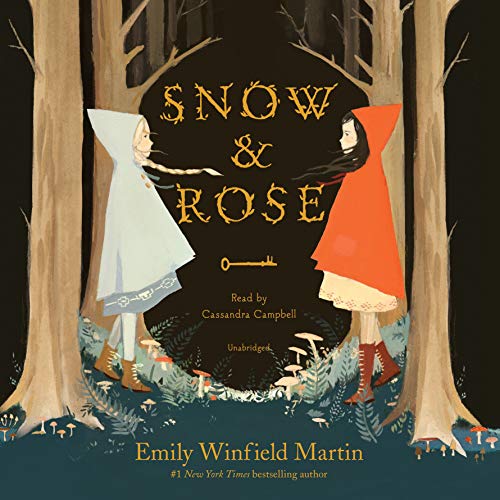 4.8 out of 5 stars
4.8 out of 5
172 customer ratings
How does Amazon calculate star ratings?
Amazon calculates a product’s star ratings based on a machine learned model instead of a raw data average. The model takes into account factors including the age of a rating, whether the ratings are from verified purchasers, and factors that establish reviewer trustworthiness.

This was one of those books that you didn't now you needed. It is a retelling of Snow White and Rose Red, two young sisters who are forced to move to a cottage in the woods after their father goes missing. As their mother grows more distant by the day, succumbing to her grief, the two venture off into the woods in search of adventure. And sometimes adventure just seems to find them. They befriend a boy who lives underground and come into contact with wolves, a bear, thieves and even a little man who seems to need rescuing over and over again.

I have no read the original Grimm tale so I am not sure how closely resembling it this book is, but I can say there was certainly magic on every page and it the anticipation of seeing the wonderful illustrations kept me up long after my bedtime. I dare to say that there was even magic in the very pages. I felt like a kid again.

Martin's writing is both magical and breezy. This is not a long book, clocking in at just over 200 pages. The girls are well fleshed out with individual personalities. I recommend this to anyone looking for fairy tales or simply something to get you out of that book slump. I highly recommend it to anybody with kids as they will find it as beautiful as I did.

Cierra
5.0 out of 5 stars I give this book all the stars, such an amazing story, and art.
Reviewed in the United States on January 30, 2018
Verified Purchase
This was the first book we have consistently read until finish, with my 7yo and 4yo. They both absolutely, heck me included, LOVED this book. I wasn't sure what to expect other than incredible art, as we have read a few of EWM's books before. From the art, to the characters and their details, she does a great job at making it easy to picture the story as you read, and truly feel like you know the characters, but never being able to expect what happens. We read a chapter a night until we finished it, and were super sad once it was over. We would LOVE a sequel, even though the book doesn't leave you being able to wonder what happened next, or there is no cliffhanger. It all flows so smoothly, and keeps you wanting to read more without those awful cliffhangers that digital media uses. I could go on and on but bottom line, highly recommend this book, so much that we might just reread it!
Read more
14 people found this helpful
Helpful
Comment Report abuse

Beth
4.0 out of 5 stars Gorgeous Illustrations & Delightful Story!
Reviewed in the United States on December 1, 2017
Verified Purchase
This is one of the most beautifully illustrated books that I've read in a long time. The illustrations and the lovely, sweet story are a charming combination. I think middle grade readers will find a lot to relate to in both Snow and Rose. Snow, though pale and icy, has a robust disposition, with feeling that feel to big for her to handle sometimes. Rose, on the other hand, is timid and wishes she might find it in herself to let her feelings carry her away sometimes. The differences between the sisters are endearing, and truly I think anyone has been a Snow or a Rose at different points in their life. I also appreciated that, while it was evident their mother was lost in grief for a time, she was not cast as the negligent parent, but rather had an active role in the story.

The details of the forest are lyrically drawn - from the mysterious library that doesn't shelve books, but skeleton keys and other intriguing objects, to the small, mysterious man, who may be more sinister than he first appears. Their cottage is warm, cozy, and 0h-so-inviting. I was charmed by the whole book. The ending feels a bit rushed, in my opinion, especially after the somewhat slow build of the beginning of the book. There's a delicate air of mystery and a bit of suspense at the end, but nothing that I feel would be too much for even sensitive readers (unless they just really don't like forests or bears). The whimsy of the telling and the depth of character make this a story worth reading. I'll probably read it again one day! :)

Kelly
5.0 out of 5 stars We absolutely loved this book
Reviewed in the United States on January 12, 2018
Verified Purchase
We absolutely loved this book! I bought it wondering if it was rewrite of my childhood favorite 'Snow white and Rose red'... turns out it is based on that tale but so much more! I read this out loud to my children as they would draw.. at the end of each chapter they would be for more! The age ranges in this house are from nine up and they all loved it. Including myself!
Magical and mysterious. And the beautiful art work just makes it that much more worth it! 🖤🖤

StuntBunny
5.0 out of 5 stars Can't Wait to Get Started On This New Story!
Reviewed in the United States on December 1, 2017
Verified Purchase
My youngest daughter is in the 2nd grade and we just finished reading Ms. Martin's "Oddfellow's Orphanage" together and LOVED IT! My daughter wanted her other books so I have bought this for an Xmas present along with Ms. Martin's "The Black Apple's Paper Doll Primer". Everything arrived quickly through Amazon Prime and I was delighted to find that her newest story is a thicker chapter book. I can't wait for Christmas morning so she can unwrap it and we can start reading it together! Of course, this is filled with Emily's beautiful and exquisite illustrations as well. Everything she does is just magical!
Read more
4 people found this helpful
Helpful
Comment Report abuse

Lorin
5.0 out of 5 stars I Love This Book!!
Reviewed in the United States on December 13, 2017
Verified Purchase
I loved this book. I loved the characters and the plot in this book. The pictures in this book are really nice. I enjoyed reading this retelling of Snow White and Rose Red. I had a hard time putting this book down.
Read more
6 people found this helpful
Helpful
Comment Report abuse

Bentoken
5.0 out of 5 stars Fairytale at its finest!
Reviewed in the United States on December 31, 2017
Verified Purchase
Snow & Rose by Emily Winfield Martin just became one of my favorite books! Fairytale retelling at its finest! The art in the book is so beautiful and magical 😭! The story and world is very Miyazaki-esque. Can’t wait for my baby girl to grow up and be able read this book to her! LOVE!!
Read more
5 people found this helpful
Helpful
Comment Report abuse

Amazon Customer
5.0 out of 5 stars A delightful and lovely tale
Reviewed in the United States on July 10, 2020
Verified Purchase
This was such a delightful and fun modern twist on an enchanting tale about sisterly love. Just the right amount of magic and a little suspence to keep it from being completely predictable. I thoroughly enjoyed this, and think it is perfect for 8-12 year olds to read on their own. It could be read aloud to youngers. The book itself is beautiful with occasional illustrations. Highly recommended!
Read more
Helpful
Comment Report abuse
See all reviews from the United States

harlequinn55
5.0 out of 5 stars Nice keepsake book
Reviewed in the United Kingdom on February 26, 2020
Verified Purchase
Love the book. Sadly I ordered the hardback and received the paperback from a seller which was a shame as this is a lovely keepsake book. Returning was a bit of a faff so kept it. The book itself is wonderful and the illustrations are beautiful :)
Read more
Helpful
Sending feedback...
Thank you for your feedback.
Sorry, we failed to record your vote. Please try again
Report abuse

chumee
5.0 out of 5 stars Beautiful book
Reviewed in India on June 7, 2019
Verified Purchase
This book has artwork and imagery in it, which is just beautiful. It really takes it to another level and makes the book a perfect keepsake.
The story is really nice, though as an adult reading it, I felt it was a little abrupt at times. Maybe it works for a young pre-teen or tween girl, who is the target reader. I bought it for a favorite niece.
All in all, the hardcover version is a good buy, and a great gift.

Rachita Sanghavi
4.0 out of 5 stars Snow and Rose never knew they were living in a fairy tale..... people usually do not know.
Reviewed in India on January 15, 2020
Verified Purchase
This story shows how two sisters go along to live their life. Till bad times come and how do they fight it and become victorious.
Very nice book.

The packaging of the product was very good and reached on time.
Read more

Shannon
5.0 out of 5 stars Wonderful!
Reviewed in Canada on November 6, 2018
Verified Purchase
So so wonderful. My 9.5yo daughter and I just finished this. So special. We both cried (happy tears!) at the end. Just bought the odd orphanage one to start next.
Read more
Helpful
Sending feedback...
Thank you for your feedback.
Sorry, we failed to record your vote. Please try again
Report abuse

laxmi Prasad
5.0 out of 5 stars Beautiful books
Reviewed in India on November 2, 2018
Verified Purchase
I honestly just love it! It has such beautiful illustrations inside. I'm sure story is gonna be great, can't wait to read.
Read more