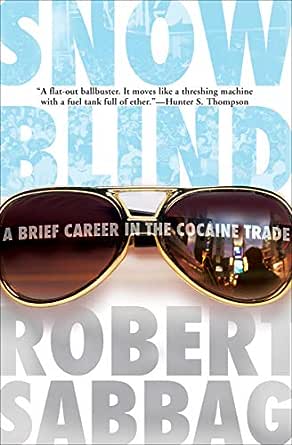 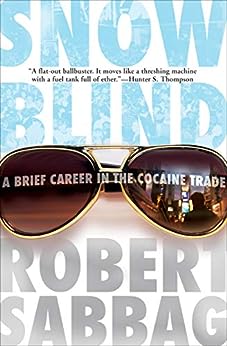 Snowblind: A Brief Career in the Cocaine Trade Kindle Edition

Robert Sabbag is also the best-selling author of Smokescreen, Too Tough to Die, and a memoir, Down Around Midnight. --This text refers to the paperback edition.

“One of the first books about the cocaine trade and it is still among the best.” —Norman Mailer

“A flat-out ballbuster. It moves like a threshing machine with a fuel tank full of ether. . . . Sabbag is a whip-song writer.” —Hunter S. Thompson

“One of the best books about drugs ever written.” —Robert Stone

“One of the most dazzling and spectacular pieces of reporting I have ever read.” —Nora Ephron

“A triumphant piece of reporting.” —The New Yorker

“The ultimate slide down the precipice of hip.” —Susan Brownmiller

“A classic.” —The National Review

“After reading Robert Sabbag’s Snowblind, one is overcome with a sense of having finally understood America. It is that rare kind of book that compels a reader to call up all of his friends and read passages to them over the telephone. It is destined to become an American classic.” —Claude Brown, Jr.

“The most authentic story of the big-time cocaine trade that has hit print, and Sabbag tells it with novelistic razzle-dazzle, setting down knife-sharp scenes as the action moves: Mexico, New York’s big hotels, Harlem streets, Bogota’s high and low-life . . . scenes and characters that make your skin crawl. A compelling read.” —Publishers Weekly

“It’s excellent . . . characters leaping to life right out of Hemingway and Damon Runyon, and everywhere, supercharging, that fine electric dust of Cordilleran snow. I hate to think of what Sabbag must have gone through to write it.” —Richard Rhodes

“Alternately scary and funny, wherein an incident or an insight is compressed and polished to an impressive sheen.” —Baltimore Sun

“This is a glorious and glittering piece of craftsmanship—like good surgical steel . . . an exciting, living story—beautifully told, addictively readable, and as urgent as a siren coming to a sinister stop in front of where we all live.” —Davis Grubb

“It’s a challenge to put the book down.” —Florida Times-Union

“The style is charged with energy.” —Boston Phoenix

“An impeccably researched, carefully written book that reads at times like an adventure story.” —Worcester Telegram

“Hip and often very funny . . . provocative . . . and utterly convincing.” —Miami Herald
--This text refers to an out of print or unavailable edition of this title.

4.4 out of 5 stars
4.4 out of 5
62 global ratings
How are ratings calculated?
To calculate the overall star rating and percentage breakdown by star, we don’t use a simple average. Instead, our system considers things like how recent a review is and if the reviewer bought the item on Amazon. It also analyzes reviews to verify trustworthiness.
Top reviews

Tim
4.0 out of 5 stars Enjoyable, reads like a work of fiction
Reviewed in the United States on October 17, 2016
Verified Purchase
I read this book the first time in high school back in the early 80's and remembered enjoying the story. When I saw it come up while looking for books to read on some business flights I had coming up, I picked it up along with a few others. It did not disappoint, and was still enjoyable, reading like a work of fiction. The subject matter is from nearly 40 years ago and seems as though it would be very dated and not at all representative of today's illegal drug environment. The "villain" is a likable guy, albeit a bit of a narcissist, and as long as you're not too hung up on whether it's the whole truth it's an enjoyable read.
Read more
2 people found this helpful
Helpful
Report abuse

Mr Pink
5.0 out of 5 stars Two Years and Out
Reviewed in the United States on March 9, 2013
Verified Purchase
I discovered this great book shortly after it first came out and have reread it many times since. A very enjoyable true story told in a very engaging manner. The characters and events will stick with you. It's hard to agree with the author regarding the harmlessness of cocaine in light of the problems society is now grappling with as a result of crack use but as a story told in the time is was written it's hard to beat. A real keeper.
Read more
5 people found this helpful
Helpful
Report abuse

Ken B.
4.0 out of 5 stars Read this when it first came out. This time was a re-read...
Reviewed in the United States on May 2, 2014
Verified Purchase
Back in the day, this kind of thing was a popular topic and I read the book then to see what the noise was all about. I found it entertaining. Lately, I've been going back to re-read a number of books I'd enjoyed in my youth, so I bought this among several others. It was an interesting read, but it wasn't as amusing as it struck me the first time. Still worth a read though, especially if the '70s interest you.
Read more
One person found this helpful
Helpful
Report abuse

john c sawyer
3.0 out of 5 stars It captures the era and the development of the trade by the inexperienced smuggler very well.
Reviewed in the United States on December 12, 2017
Verified Purchase
It was an interesting story but it did get a bit bogged down at times with details that for me weren’t needed.
Read more
Helpful
Report abuse

Kindle Customer
5.0 out of 5 stars Snow blind
Reviewed in the United States on March 1, 2012
Verified Purchase
Although the information in this was slightly dated, it was still relevant to the present. I recommended it to my college aged grandchildren, as they are the ones who should fight to have our drug laws revised, and the country brought into the twenty first century.
Read more
One person found this helpful
Helpful
Report abuse

John
5.0 out of 5 stars Superb
Reviewed in the United States on July 28, 2013
Verified Purchase
I read this book for the first time in the eighties and it really hasn't aged. Of course it has nothing to do with the modern drug trade but the human motivation and character portraits are as true to life now as then. Must read!
Read more
One person found this helpful
Helpful
Report abuse
See all reviews

Gary
5.0 out of 5 stars Still the best book out there for the Cocain industry
Reviewed in the United Kingdom on April 5, 2018
Verified Purchase
Great Book - never dulls!
Read more
Report abuse

Lucky
5.0 out of 5 stars book
Reviewed in the United Kingdom on February 25, 2013
Verified Purchase
very good book on the lives of people on drugs and the underground movement good price and good postage and packaging
Read more
Report abuse