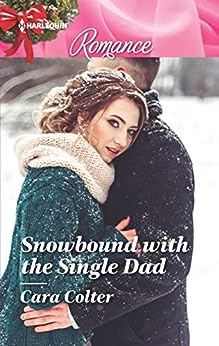 "This has been one of my favorite Christmas Romance books this year." -Harlequin Junkie --This text refers to an alternate kindle_edition edition.

Cara Colter shares ten acres in British Columbia with her real life hero Rob, ten horses, a dog and a cat.  She has three grown children and a grandson. Cara is a recipient of the Career Acheivement Award in the Love and Laughter category from Romantic Times BOOKreviews.  Cara invites you to visit her on Facebook! --This text refers to an alternate kindle_edition edition.

Janet Rodman
4.0 out of 5 stars Christmas romance
Reviewed in the United States on December 1, 2018
Snowbound With the Single Dad
By Cara Colter
Noelle McGregor has had a tough year; her beloved Grandmother died, her Grandfather sold off some of the McGregor land, and finally, her fiancé left her. She was looking forward to spending Christmas with her Grandfather Rufus. Noelle is shocked when she arrives at the ranch. No decorations and her Grandfather is no where to be found. She finally follows the tractor tracks and finds him building a helipad. Once they get back to the house, her Grandfather tells her all about his plan to offer someone an “Old Fashioned Country Christmas” at the ranch. Noelle is horrified that someone is taking advantage of her Grandfather. The people who shows up are Adian Phillips, his five year old daughter Tess, and Nana, Tess’s caregiver. Adian is a widower who tries to do everything to make Tess happy. After a bit of a rocky start, Adian begins to enjoy himself, especially when he sees how happy his daughter is. Soon Adian and Noelle realize that they have feelings for each other, but fear on Adian’s part separates the pair for a period of time.
I enjoyed this cute Christmas story. I laughed at the relationship between Rufus and Nana. This is a great story for anyone looking for a little Christmas cheer.
Read more
Helpful
Report abuse

Margie Hager
5.0 out of 5 stars One of Favorite Christmas Romance Stories This Year
Reviewed in the United States on December 2, 2018
Grandpa McGregor has decided he is hosting an Old-Fashioned Christmas. One thing though - he neglected to tell his granddaughter Noelle McGregor about it. Noelle has been a bit concerned about her grandpa since Grandma McGregor passed away a few months ago. Grandpa just didn't seem to be the same, even somewhat forgetful. But inviting strangers into his home for an Old-Fashioned Christmas! What was he thinking? Noelle wasn't much reassured about the whole thing when widower billionaire Aidan Phillips landed his helicopter in her grandpa's field and exited with his five-year-old daughter Tess and her nanny. For Noelle and Aidan it was "Distrust at First Sight." Noelle had just been left by her fiance and certainly wasn't interested in any relationship with a guy. Aidan thought Grandpa McGregor was trying to play matchmaker between him and Noelle. Not interested! So the fun begins!

This is a fabulous Christmas Romance. Author Cara Colter hits just the right spot with sweet romance, Christmas fun (especially with Tess), lots of humor and fun dialogue. She sets the scene for an Old-Fashioned Christmas so well: no cell phone service (really roughing it for a billionaire businessman), lots of snow for making a snowman and other fun snow activities, a horse-drawn sleigh, a rustic house with blazing fireplaces and even gingerbread house assembling. So much Christmas spirit is in this story. I found it to be a very entertaining and mood elevating Christmas book. I wanted Grandpa McGregor to invite me there too so I could enjoy the ambiance and fun of his Old-Fashioned Christmas too. This has been one of my favorite Christmas Romance books this year. I loved it!
Read more
Helpful
Report abuse

Susan Frank
4.0 out of 5 stars Good holiday book
Reviewed in the United States on December 29, 2018
weet and fun Christmas story with a little bit of heat to warm things up. Noelle was looking forward to spending Christmas with her grandfather. In the past year, they'd had to sell off most of their land and her grandmother had died, leaving it just Noelle and her grandfather. Noelle's fiancé had also broken up with her, along with cleaning out their joint savings account. Noelle worried about her grandfather and how he was coping with her grandmother gone. When she arrived at the ranch and discovered that there were no preparations made and that her grandfather had invited strangers to spend an "Old-Fashioned Country Christmas" at the ranch, she was afraid that he was losing his grip on reality. She was stunned when billionaire Aidan Phillips landed his helicopter in the field, ready for his daughter and her nanny, as well as himself, to celebrate Christmas.

I laughed pretty hard at Rufus's description of going on the "interstate" to advertise for people to come. He was so excited at what he had done, and Noelle was so horrified. I did understand her fears, but I ached a bit for Rufus because she was such a downer. Aidan's arrival was quite a shock for her, in several ways. First was the immediate attraction she felt for him, something that she didn't want. She was off men, thanks to her recent breakup. Then he made her mad with his cynical comments about her grandfather and finished things off with some rather obnoxious remarks about her. Aidan wasn't exactly Mr. Sunshine. He didn't want to be there, but he was desperate to give his daughter the Christmas she wanted. He wasn't too thrilled to find an attractive woman there, too used to women throwing themselves at him to believe that she doesn't have an agenda. He was stressed about finding the one Christmas present that Tess wanted. And then he found out that there was no cell service and no internet.

The sparks between Aidan and Noelle were strong from the very start. There was plenty of antagonism, which was aggravated by how hard they fought the attraction. I liked that they did their best to put the arguing aside to give Tess the holiday she wanted. Though Aidan seemed arrogant at first, it soon became clear that he adored Tess and was desperately trying to find his way as a single father. Being somewhat cut off from the outside world gave him the chance to spend time with Tess without distractions. I loved watching him loosen up and start to have fun with both Tess and Noelle. As their antagonism decreased, other feelings began to develop. There were some sweet scenes between Aidan and Noelle as the Christmas preparations went on. I really liked how he comforted her after her talk with her grandfather and seeing what her ex is doing now. There was an unexpected sweet side to him as he planned a surprise for her. The trip into the city brought their attraction closer to the surface, and it only increased when they became stranded on the way back to the ranch. But the connection that Aidan felt brought out his insecurities about his ability to have a successful relationship, and he pulled back hard. I ached for Aidan because he had fallen in love with Noelle, but was so afraid of hurting her and Tess that he didn't trust that they could have a future together. I hurt for Noelle, who loved Aidan deeply, but knew she couldn't be the one to fix him. I loved seeing how differently she handled this heartbreak and her decision to take control of her life. I loved the unusual way that Aidan and Noelle were reunited, and how her newfound strength helped Aidan face his fears. The ending was sweet and romantic as they took the time to make sure of their love. The epilogue was adorable.
Read more
Helpful
Report abuse

EssentiallyBookish
3.0 out of 5 stars Enjoyed it
Reviewed in the United States on December 23, 2018
Noelle's grandfather gives her quite a surprise when she finds out that he put out a ad for people to join him for an old fashioned christmas. Surprise of surprises is that tycoon Aiden replies to the ad and brings his daughter in tow because hes not one to say no to her and managed to land himself in this situation. Both aren't happy with this situation but will try to make the best of this situation.

This was a sweet heartwarming story. I enjoy seeing a hate to like kinda relationship and this book had that so it made me like the book all the more. I loved seeing the romance brewing between the two and how things were with them. I enjoyed seeing how they were spending the holidays and seeing how lively the daughter made things. I also liked the grandfathers character he was interesting and meddling and did things with the best of intentions which was sweet. Overall this was a nice little holiday romance and I enjoyed it.
Read more
Helpful
Report abuse
See all reviews