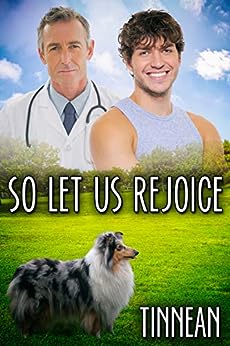 So Let Us Rejoice Kindle Edition

by Tinnean (Author) Format: Kindle Edition
See all formats and editions
Sorry, there was a problem loading this page. Try again.
Even the nicest of guys can decide to cut loose at some point, especially if he's at college and a frat brother invites him to a party. Unfortunately, that can end quite badly. Luckily for Dante ap Owen, it doesn't -- until he keeps needing to piss every few minutes and he sees blood in his urine. Another stroke of luck for him is the substitute professor, also a medical doctor he’s been crushing on, who happens to be there when he passes out in class and pushes him to come to his clinic.

But Dante and his beloved, critically ill mother are under the control of his bitter uncle, who also provides health insurance. If his uncle finds out Dante is being treated for anything, let alone what Dante fears is an STD, he's ... Dante doesn't want to think about that. So he flees the clinic before he has to make a follow-up appointment.

The good doctor shows up at his uncle's farm when phone calls do nothing. And when Dante's uncle invites the doctor to dinner and serves a meal worthy of Medea, the doctor urges Dante and his mother to leave. But will they? And will Dante realize the doctor wants him as much as he wants the doctor?
Read more
Previous page
Next page

Tinnean has been writing since the 3rd grade, where she was inspired to try her hand at epic poetry. Fortunately, that epic poem didn't survive the passage of time; however, her love of writing not only survived but thrived, and in high school she became a member of the magazine staff, where she contributed a number of stories

It was with the advent of the family's second computer - the first intimidated everyone - that her writing took off, enhanced in part by fanfiction, but mostly by the wonder that is copy and paste.

While involved in fandom, she was nominated for both Rerun and Light My Fire Awards. Now she concentrates on her original characters and has been published by Nazca Plains, Dreamspinner, JMS Books, Wilde City, and Less Than Three Press. She has also self-published a number of books, including the Mann of My Dreams series and Best Laid Plans.

A New Yorker at heart, she resides in SW Florida with her husband and three computers.

She can be contacted at tinneantoo@gmail.com

If you'd like to sample her earlier works, they can be found at https://tinnean.webs.com/

There are 0 customer reviews and 6 customer ratings.