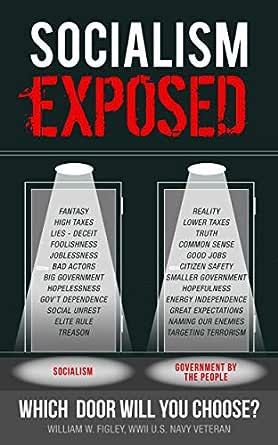 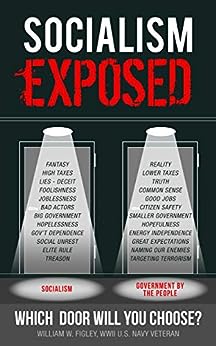 Socialism Exposed: Which Door Will You Choose? Kindle Edition

3.6 out of 5 stars
3.6 out of 5
21 global ratings
How are ratings calculated?
To calculate the overall star rating and percentage breakdown by star, we don’t use a simple average. Instead, our system considers things like how recent a review is and if the reviewer bought the item on Amazon. It also analyzes reviews to verify trustworthiness.
Top reviews

Craig A. Meyer
1.0 out of 5 stars Feeds anger, lacks substance in reality
Reviewed in the United States on November 4, 2018
Verified Purchase
While certainly the (main) author should be praised for his military service, his understanding of "socialism" is wrong. Further, his personal ideology is dangerous, divisive, and inflammatory. This text encourages drinking of the proverbial koolaid that is what at least part of the Republican party has become, which isn't about fiscal responsibility as it claims (look at the modern history of national debt for evidence of this). Instead it fans the flames of fear and points tired, old fingers at everything that doesn't agree with it. (Of course, this is only a brief lens onto the Rep. party.)
A sampling of some quotes demonstrate this clearly enough:
"Politician, student, or professor – it’s the same mentality, played out differently, but amounting to the same thing – “We hate what has happened. Our country is lost, our hope is gone - we can never…” and on and on. Did the Republicans act this way in 2008 and in 2012 when Obama won these elections? Of course not!" p.48 (Yes they did, actually. Look at all the attacks on Obama's character and policies, including the nooses and rise of white racists, even the times Rep. forced critical shutdowns of the Govt, all in hopes to smear Obama.)

"Common sense is something that socialists (and most leftist liberals) have in short supply." p.50 (this is obviously an attack lacking evidence, since it has an all/none mentality. It's really saying no liberal person has any common sense.)

However, there is not a complete failure of "common sense" in the text: "We must strive to educate our citizens, whoever they are and in whatever condition they are in, to become interested in their government and in its workings." p.70
Yes, we do need to educate our citizens so they are able to think clearly, do research, and not accept the discourse of those of wealth or positions of power/authority as factual, when the claims they make are not accurate or factual.

If you are in goose step with Trump, you will LOVE this text. If you are a rational thinker, with reasonable critical thinking skills, care about your fellow human being, or even understand how the U.S. Govt should work, this text will be a disappointment on several levels. It's disappointing because it is a political diatribe by someone that does NOT understand "socialism" but has accepted the faulty discourse against it as gospel. It's actually laughable the "solutions" the author claims will work, because they are partly rooted in socialist thinking.
Summation: At best, it offers some ideas to ponder, but you'll have to dig deep and wade through a lot of ideological garbage. At worst, it fuels the ignorance of division, sexism, racism, classism, religious intolerance, and even, although it suggests otherwise, an uneducated citizenry.
This poor fellow is an old white dude who is mad at the problems of the world. Of which there are many, but they will not be solved by anger and division. The solutions are complex, but they will never be reached by texts like this that fail to realize reality with clear eyes that understand humanity, justice, tolerance, compromise, and honor. This books becomes, basically, a man screaming into the mirror saying "DO SOMETHING!" (which the person/group this author thinks should do something is exactly the group he's against, not himself being part of the solutions, and that's too bad.)
Oh, and I'm an independent, not R or D.
Read more
25 people found this helpful
Helpful
Comment Report abuse

Kindle Customer
1.0 out of 5 stars The Republican notions of socialism for the rich is destroying America
Reviewed in the United States on November 4, 2018
Verified Purchase
We used to have a space program, we used to be able to get astronauts to and from the ISS ourselves. Now we have to rely on the Russian space program to reach the ISS now. The DoD developed the internet which revolutionized our lives, but if you want fast internet go to Europe where the socialism benefits the people as well. If we rely on corporations to do any kind of research, we'll still be funding it either as tax breaks or with their profits which come out of our pockets. The biggest problem is our socialism for the rich. They pay no tax and do nothing in return but get even richer. Run away profit margins are our other problem, along with right wing think tanks and the people who believe them.
Read more
17 people found this helpful
Helpful
Comment Report abuse

M. P.
5.0 out of 5 stars Socialism is for the ignorant.
Reviewed in the United States on November 5, 2018
Verified Purchase
Socialism is an ideology that has killed over 100 million people in the last century. It needs to be exposed for what it is - slavery to the govt.
Read more
13 people found this helpful
Helpful
Comment Report abuse

Joneva L. Flowers
5.0 out of 5 stars The Wisdom of Age and Experiences
Reviewed in the United States on April 17, 2020
Verified Purchase
I absolutely learned what I could lose if Americans don’t remember the origins of our founding. This book is a tribute to both hindsight and foresight of our country. It was an honor to read and learn from this well written book.
Read more
4 people found this helpful
Helpful
Comment Report abuse

Publishing Professional
3.0 out of 5 stars Basic conservative manifesto
Reviewed in the United States on November 9, 2018
Verified Purchase
This book is a series of very quick talking points with very little insight or depth. For what it is, I serves its purpose. A few paragraphs on a series of subjects, essentially expressing the conservative view. Nothing unique or interesting. No compassion or interest in comparing or contrasting viewpoints. Other ideas are evil. OK then. The author is 92, so I gave 3 stars. He has a monodirectional eye without insight into why others hold different views. Even if these views are accurate, this book is essentially worthless reading material. It regurgitates the conservative viewpoints without contributing to the conversation.
Read more
One person found this helpful
Helpful
Comment Report abuse

B. Lynn
5.0 out of 5 stars Thank you, Mr. Figley, for your service to our country as well as sharing your wisdom!
Reviewed in the United States on November 9, 2018
Verified Purchase
If you are a true Patriot, loving America, the Constitution, freedom, and equal opportunity for all citizens, you will enjoy reading this book while repeating "Amen!" , "That's right!", and "Good idea!". This should be required reading in our schools to inform as well as stimulate critical thinking.
Read more
4 people found this helpful
Helpful
Comment Report abuse

Kindle Customer
5.0 out of 5 stars Truth well spoken. A true patriot. Thank you for your service
Reviewed in the United States on December 1, 2018
Verified Purchase
Recommended for everyone

His message and advice are so right on. Everyone, especially those who are so enamored of the.progressive socialist movement should read this book and seriously consider what is happening to our country
Read more
4 people found this helpful
Helpful
Comment Report abuse

ArrigoBA
1.0 out of 5 stars Article? Where?
Reviewed in the United States on January 5, 2019
Verified Purchase
I dont see where I can read the article
Read more
Helpful
Comment Report abuse
See all reviews