The Society of Necessities and millions of other books are available for Amazon Kindle. Learn more
Share <Embed> 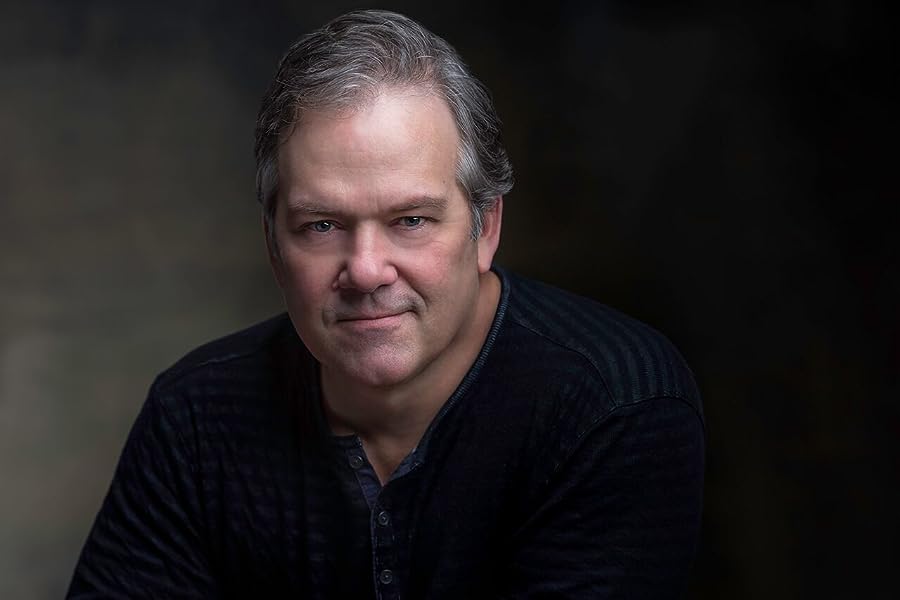 by Christopher Bowron (Author)
5.0 out of 5 stars 7 ratings
See all formats and editions
Sorry, there was a problem loading this page. Try again.

I absolutely loved this book! Enthralling, jam-packed with danger and intrigue, I would highly recommend it to lovers of fast-paced adventure with that little bit more, such as you would find in the writings of Steve Berry and Raymond Khoury.
The Columbia Review  Thecolumbiareview.com
Susan Keefe

The Society of Necessities by Christopher Bowron


A well-known, and much published author, Christopher Bowron earned a B.A. in history and graduated from Brock University. He runs a real estate brokerage and lives in Niagara-on-the-Lake Ontario, Canada. In this fast-paced, gripping, adventure, he has embraced his love of the paranormal and history to take his readers on an unforgettable ride through centuries, and across continents.

The protagonist of this story, Daniel St Croix is a rebel, and petty thief, who left home at a young age. So, he is surprised to be contacted by his grandfather, Pierre Le Croix's solicitor, out of the blue. The solicitor gives him a strange wedding band, which is called the metal, and then reveals he is the sole heir to an estate and fortune in Quebec.
Accompanied by his beautiful and exotic girlfriend Devi, he visits his mother Vivianne, who reveals an astonishing secret about his grandfather. All three then continue on to the estate in Quebec City. There, dear readers, the mystery really deepens.
It is at the estate, through Pierre's long time servants, Robert and Yvette, that Daniel discovers Pierre, has led an incredible existence which has lasted centuries, dating back to the French court of Louie XVI. From when the ring came into his possession, it changed Pierre's life with its incredible powers of rejuvenation, and ability to grant longevity.

He also learns that Pierre and his servants have been hunted through time by the mysterious Society of Necessities, whose members desperately seek to obtain the ring and its powers, at any cost, and now as its owner, he is their new target.

Pierre's quest to discover the origin of the ring had taken him across the world, and revealed something else, another artefact he longed to possess. He hoped Daniel will continue the search. However, in taking up the gauntlet, Daniel is unaware there are other secrets, not yet revealed to him. With The Society of Necessities on his trail, and danger at every turn, will he be able to find the relic?

As the author weaves his clever story, the sights and sounds of other worlds and times are laid before his readers. The theme of immortality enables Christopher Bowron to expand our horizons, and open our eyes to the mysteries of centuries, the stuff of legends...

I absolutely loved this book! Enthralling, jam-packed with danger and intrigue, I would highly recommend it to lovers of fast-paced adventure with that little bit more, such as you would find in the writings of Steve Berry and Raymond Khoury.

The Society of Necessities by Christopher Bowron is not one of those novels that is to be devoured with a light heart. The pages scroll by feverishly
bookmarkks.blogspot.com

"An intriguing fast paced mystery filled with plenty of twists and turns - Recommended."

As Daniel and Devi are forced to change, then reconsider their relationship in the face of their new identies, the story becomes as compelling as that of The Di Vinci Code. Fans of this classic will find much to love in The Society of Necessities.

The Society of Necessities provides historical fiction that blends with a thriller story's nonstop pace, and opens with Daniel St. Croix's last act of industrial espionage before his death. All he has to do is elude the cleaning staff and make his getaway. Next on the to-do list is his second date with the exotic East Indian girl Devi. Little does he know that this might lead to a new introduction to previously unknown facets controlling his life in a strange resurrection that brings with it a renewed purpose.

The Society of Necessities adopts an exceptionally fast pace, but takes the time to build relationships, puzzles, and history surrounding a Canadian man's initial underlying desire to exit the rat race of convention and live "a life without pretense."


Be careful what you wish for. Since pretense has driven his life up to this turning point, Daniel is in for many changes. Readers should prepare for many big surprises along the way.

As shootings, kidnappings, and threats from different directions emerge, Daniel and Devi become lovers on a mission that supersedes romance and enters into a passion for survival and finding answers to difficult questions.

Christopher Bowron juxtaposes two lives--Daniel and his father, Pierre St. Criox--clarifying these characters' experiences with the use of the third person and first person to outline their differing points of view, making for an easy segue between the two.

The action moves from a small-time operation to international waters as a mysterious ring and an inheritance of danger come to life.

Readers who like their puzzles compelling and fueled by a search through history and French heritage will find the action keeps them guessing as Daniel draws ever closer to a strange truth buried in both past and present events.

The history that supports this story weaves nicely into the thriller components. The action is fast-paced, but well drawn as Bowron takes time to capture changing relationships between all characters as well as past and present lives.

Who has the ring? Who is immortal, and who is invincible?


As Daniel and Devi are forced to change, then reconsider their relationship in the face of their new identies, the story becomes as compelling as that of The Di Vinci Code. Fans of this classic will find much to love in The Society of Necessities.
Diane Donovan, Senior Reviewer, Midwest Book Review

The Society of Necessities was one of those stories that had been on my mind for years... I had to let it out. I do love the Paranormal and it always finds a place in my writing. It does not permeate, but rather, accentuates. You can read the book straight up, or you can delve further into the mysteries within. I hope you enjoy!

Christopher's roots are in Canada, and his two children make the fifth generation to live in Niagara-on-the-Lake, Ontario, the first capital of Canada. His second home is in Southwest Florida. Both provide ammunition for his imagination and his love of storytelling. The diversity of the Everglades became the backdrop for his first published and best-selling novel, Devil in the Grass, and sequel, The Palm Reader. Other books include The Body Thieves, self-published. Considering himself fortunate, Chris enjoys living his own personal great story. After earning a BA in history and graduating from Brock University, Chris is now surrounded by a wonderful family and runs a real estate brokerage. Whenever possible, he enjoys getting away to do some saltwater fishing in Florida.
Read more
Start reading The Society of Necessities on your Kindle in under a minute.

Emmalini
5.0 out of 5 stars A first-rate adventure story!
Reviewed in the United States on August 3, 2021
Verified Purchase
We meet Daniel St. Croix, professional thief, as this book opens in Ontario in present time. That evening we meet Daniel’s date, Devi, at dinner having the kind of getting-to-know-you conversation typical of a second date. We learn that Daniel has an extraordinarily nice car and a very expensive condominium…a little unusual for a twenty-six year old.

Events move VERY quickly in Daniel’s life and what follows dinner is only the start of a novel filled with action, intrigue and a journey into the realm of paranormal possibilities.

At a later point we’re in 1788 in Bourbon, France and are introduced to Pierre de Bourbon, an 18 year old whose cousin is King Louis VI. Pierre’s father sees this particular son as expendable since he’s third in line to become Duke. The Duke has been summoned to court and so Pierre is sent in his stead. Pierre is allowed to take Robert, a 13 year old servant. Pierre’s and Robert’s experiences at Versailles mark the beginning of a years-long relationship and lives filled with the unexpected and mental adjustments that our own lives will likely not require. They leave Versailles with treasures that not only support them financially, but later take them down life threatening paths.

Mr. Bowron writes beautifully and artfully blends what we know (or think we know) about reality and what many have written about and wished for over the centuries…immortality or at least something close to it.

I’ve read and enjoyed all of Mr. Bowron’s books and always look forward to the next one. The Society of Necessities is a fabulous adventure novel that covers a lot of territory . . . geographically as well as historically. His imagination and his writing skills allow us to enjoy worlds that we might not otherwise consider.
Read more
Helpful
Report abuse

Amy's Bookshelf Reviews
5.0 out of 5 stars Amazing read!
Reviewed in the United States on July 10, 2021
Verified Purchase
Bowron pens a superb, powerful and intriguing story in The Society of Necessities. I have read work from this author before, and I really enjoyed it. This may be my favorite of Bowron's so far. Daniel gets one heck of an inheritance, wrapped with secrets and power, a power that is unimaginable. It's a great story to follow, and Bowron really brought in the story with realism and grand imagination. Puzzles, twists, secrets, and journeys make this story unputdownable!!! Imagine a ring from an Egyptian Pharaoh, and then it's all of a sudden, yours, centuries later. What an unforgettable story. It is a very well-written story, and I absolutely enjoyed it. This author is not just a writer but a great storyteller. This story captures the reader's attention at chapter 1. This read is more than just words on a page. The Society of Necessities is a definite recommendation by Amy's Bookshelf Reviews. I look forward to reading many more stories by this author.
Read more
Helpful
Report abuse