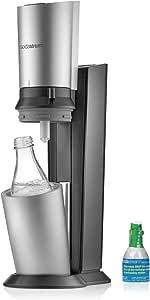 Visit the sodastream Store
3.7 out of 5 stars 48 ratings
Currently unavailable.
We don't know when or if this item will be back in stock.

SodaStream allows you to turn plain water into sparkling water in an instant. With SodaStream, you have the flexibility to create your own sparkling drinks by adjusting the fizziness and flavor level to your personal taste.

3.7 out of 5 stars
3.7 out of 5
48 global ratings
How are ratings calculated?
To calculate the overall star rating and percentage breakdown by star, we don’t use a simple average. Instead, our system considers things like how recent a review is and if the reviewer bought the item on Amazon. It also analyzes reviews to verify trustworthiness.

Kate McMurry
TOP 100 REVIEWER
4.0 out of 5 stars Mostly satisfied with this Crystal model, which is very similar to the Penguin model
Reviewed in the United States on September 2, 2017
Vine Customer Review of Free Product( What's this? )
I previously owned a type of SodaStream model called the Penguin. After carefully examining this Crystal model, it seems clear to me that it is very similar to the Penguin, and perhaps they are offering it because you can only buy the Penguin brand new through Williams-Sonoma. At any rate, the Crystal model uses the same type of carbonators and the same type of glass carafes as the Penguin. That is, the carafes have an identical shape, though SodaStream has changed the design of the top of the carafes and the type of cap they use for both the Penguin and the Crystal from the type of cap the Penguin had up until a few years ago.

I am going to cross compare the Penguin and the Crystal in this review, because I have now used both.

Currently the Penguin starter kit includes, for the same recommended retail price I paid in 2009:

This is what you get with the Crystal starter kit:

So, basically, you get $90 less of product for $70 less in cost than I paid in 2009, which I suppose one could mark down to inflation. I also have to admit that SodaStream has kept the price for a new carbonator at the same level of $30 over the past 8-10 years, and likewise for the price of $15 for a carbonator exchange.

I find the Crystal harder to open up in its back side to insert/replace a carbonator than the Penguin. However, the front side of the Crystal is a bit easier to use when I insert a carafe into it to pump CO2 into the carafe. Also, the method of pumping the CO2 is easier for the Crystal than for the Penguin, though it doesn't whistle as loudly and obviously as my old Penguin did when a carafe was adequately filled with CO2.

My main complaint as a former owner of the Penguin, who has six carafes in my home that I used for the Penguin, is that because SodaStream has changed the bottle caps used on the current carafes (identical for the current Penguin model and the Crystal model), they no longer make or sell the much better fitting caps used on the former Penguin carafes. The old caps featured a short plug piece that fit into the bottle top, as well as screwing onto the bottle, and this plug does a terrific job of holding in the CO2 fizz for up to two days. These new screw-on caps barely hold the fizz in the carafe for a day. I personally think that SodaStream modified the cap, not to improve the product, but rather to ensure that customers use more CO2. That's where the real cost mounts up for this machine, purchasing new and exchanging carbonators.

Spencer in Seattle
TOP 500 REVIEWERVINE VOICE
2.0 out of 5 stars Has Five Design Flaws ... Just Watch My Video
Reviewed in the United States on August 24, 2017
Vine Customer Review of Free Product( What's this? )
As I demonstrate in my video, this SodaStream model is a step DOWN in several ways from the older model. We've been using Sodastreams for years and have owned two previous models. We absolutely love them for the water quality, control over degree of carbonation, and $$ savings. However, this model does not impress. Here's why:

1. it leaks and drips water after carbonation ... the water then builds up in the deep bottle holder and is hard to clean out with a paper towell
2. water capacity in the bottles is less than traditional plastic bottles
3. capacity size of carbonator is less/smaller ... you simply can't use the large carbonators in this unit!
4. it has more plastic and spring-loaded moving parts ... and that means more potential to break
5. the raising face also means the unit won't function under most cabinets when used on a kitchen counter

So why get this sodastream model? Well, it looks fantastic, hides it's innards when not in use, and many people prefer glass over plastic. So I'm not saying I hate it (that would be one star). However, I would have liked to have seen a real upgrade when this one is a downgrade in many ways.
Read more
97 people found this helpful
Helpful
Comment Report abuse

Cheryl Dunn
2.0 out of 5 stars I used to LOVE my SodaStream
Reviewed in the United States on February 15, 2018
Verified Purchase
I used to LOVE my SodaStream. But after about 2 years, it started malfunctioning; specifically, after pushing the plunger 3 times, it would not make the "pulsing" noise it's supposed to make to let the user know the water is sufficiently carbonated. Upon opening the container with the bottle, about 1/3 of the water was pushed out of the water bottle, and the water remaining was undrinkable. So I tried another CO2 canister, and it did the same thing. Rather than struggle with the Sodastream company about a warranty after 2 years, I threw out the old Sodastream and bought a NEW one--this one that I purchased on Amazon. And now, it's doing the same thing! I get about ONE decent bottle of carbonated water for every FOUR that I try. It must be a defect in the dispenser...I don't know. What I DO know is that I'm not a satisfied customer. Amazon may pass this complaint on to Sodastream...perhaps they'll listen.
Read more
18 people found this helpful
Helpful
Comment Report abuse

AbeK
3.0 out of 5 stars Works fine, pedestrian design and build materials
Reviewed in the United States on January 27, 2018
Verified Purchase
I replaced the SodaStream penguin model with this one after the penguin started to leak water during fizzing. This works fine, but the quality of the build is pretty poor. It also makes a less "pleasant" noise than the penguin when fizzing. Otherwise, it does the job. Too bad SodaStream doesn't make a version with a cooler design and high quality materials for people who care about what this thing will look like in their kitchen.
Read more
13 people found this helpful
Helpful
Comment Report abuse

Picky bee-eye
3.0 out of 5 stars The better taste, and the health benefits of not using ...
Reviewed in the United States on July 25, 2018
Verified Purchase
Glass bottles! No expiration date. The better taste, and the health benefits of not using plastic. The water maker itself is little more cumbersome to use than my last Sodastream model. Also, as others have said, liquid does get trapped in the machine. I use it only for water, but I would imagine that would end up being a sticky mess if you made soda with it. Still, I'm really happy with this. I do wish they allowed others to make bottles. It would be nice to have a variety of styles to choose from. Also, the little starter cartridge is absolutely pathetic. Totally cheap, in my opinion. For this price, you can give me a proper cartridge!
Read more
4 people found this helpful
Helpful
Comment Report abuse
See all reviews
Pages with related products. See and discover other items: Soda Makers, Best Rated in Soda Makers, gifts with seals