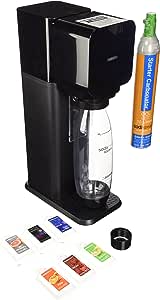 3.7 out of 5 stars
3.7 out of 5
27 global ratings
How are ratings calculated?
To calculate the overall star rating and percentage breakdown by star, we don’t use a simple average. Instead, our system considers things like how recent a review is and if the reviewer bought the item on Amazon. It also analyzes reviews to verify trustworthiness.

A. Jones
5.0 out of 5 stars Four years and still great!
Reviewed in the United States on July 26, 2020
Color: WhiteVerified Purchase
Four years ago I selected this model because it takes the larger CO2 canisters, which are now no longer available, which is unfortunate, but I am still happy with the purchase. It has worked perfectly and stays looking clean. The only down side is that a couple of years ago I dropped the bottle that came with it and it broke, with the base separating from the clear portion.
Read more
Helpful
Comment Report abuse

Jaw
5.0 out of 5 stars Great Product
Reviewed in the United States on March 13, 2017
Color: WhiteVerified Purchase
Love this machine that I bought two (one for backup, when the first one breaks after I found out they don't make the quick lock machines anymore). It works perfectly, easily, and lets me control how much bubbles I want in my water. I love the fact that you dont have to twist the bottle in and out. Just put in and it locks then you press down the front block and it fills with CO2, lift up and pull out. Why they would go backwards to a screw in bottle is beyond me.
Read more
One person found this helpful
Helpful
Comment Report abuse

william v. albrycht
1.0 out of 5 stars NOT WHAT THEY ADVERTISED
Reviewed in the United States on February 28, 2019
Color: BlackVerified Purchase
I got their machine,but with no mixes like they said. my wife checked the box again, nothing.
Read more
Helpful
Comment Report abuse

Bruce
2.0 out of 5 stars Waste of money
Reviewed in the United States on January 8, 2017
Color: BlackVerified Purchase
It doesn't attach well. Makes a mess. Waste of money. I would have sent it back if the box had been destroyed after opening it.
Read more
2 people found this helpful
Helpful
Comment Report abuse

Laura A
5.0 out of 5 stars Healthy alternative to soft drinks
Reviewed in the United States on September 13, 2015
Color: BlackVerified Purchase
I use it without any flavorings and just add a lemon, lime or berries. It's great to be able to have carbonated water without having to carry bottles from the store. It's also nice to be able to control the amount of carbonation.
Read more
4 people found this helpful
Helpful
Comment Report abuse

2512rc
5.0 out of 5 stars getting a better seal, imparting more carbonation
Reviewed in the United States on June 26, 2015
Color: Black
I did fairly extensive research preceding this purchase, as I was looking for an alternative to canned / bottled "Zero" beverages that do contain Aspartame. The result lead me to the Sodastream Play. Others talk of the designer styling which was of no concern to me, but it does look sharp ! I will tell those that are apprehensive due to negative reviews that while I experienced the same issues some here describe (not fully charging the carbonator, no "burp" of the relief valve, tiny "poofs" of carbonation after full recovery of the carbonation block on the front {you push the whole front square piece down}, the bottle "gripper" not sealing well enough to capture / hold carbonation, what little carbonation was applied leaking out of the bottle within an hour and suspect operation ), I kept at it because it is my nature to figure things out. What I found after changing the carbonator cylinders (and changing back to the 15L starter cylinder), checking the seals on each end and activating it repeatedly after letting it recover - was that mine seemed to "break in" within 3 days, getting a better seal, imparting more carbonation, carbonation lasting longer and now it operates perfectly ! I push the carbonation block down until it "burps" 2 - 4 times and I've got GREAT FIZZ that lasts as advertised (screw the bottle cap on snug !) ! This unit comes as you see it - one soda maker, one bottle, one starter 15L carbonator with NO flavoring samples - which also was of no consequence as I add Powerade Zero, etc. . Certainly, with any manufactured good there will be occasional defects, but those that had poor performance initially might have had luck keeping at it for a couple days. The "gripper" arrangement on this is really great if the unit is sealing well, as the fill neck swings forward, you place the bottle with cold water in it, swing it back to the fill position and blast ! No screwing on of the bottle to slow down removing it after carbonation, causing loss of some CO2 in the process. This one's a long review - hope it helps !
Read more
25 people found this helpful
Helpful
Comment Report abuse

M and C
5.0 out of 5 stars Love it!
Reviewed in the United States on December 15, 2014
Color: Black
Based on reviews, I originally set out to purchase the Genesis model. The store I went to was sold out however they had the Jet and Play on display. After doing a side by side comparison, looking at the quality of the product as well as the basic functions, I decided to go with the SodaStream Play. The bottle is easy to get in and out, I liked the "snap in" feature as well as the carbonation chamber. There are no pieces you have to remove to install a new canister. You simply lay it down, unscrew the canister and replace. The carbonation block is also very sturdy and easy to push down. I felt the carbonation button/lever on the Jet was a bit flimsy and could easily break with repeated use. I also did not like the back piece that you have to take on and off to get at the carbonation chamber. The plastic of the Jet felt like a lesser quality material than the Play.

I wanted a SodaStream mainly for the sparkling water as I easily drink a liter a day and at an expense of $60+ a month it was a luxury up for debate in the grocery budget. The SodaStream Play has not disappointed in the least bit and the carbonation exchange is very reasonable at $15. A full canister will make 60L. If you like high carbonation and carbonate each liter more than once, you may get less. Either way $15 a month is way better than $60+.

We have tried one of the sample flavors and my son loved it. We used the Orange flavoring, contrary to other reviewers, I didn't think it tasted like a diet drink at all.