$16.10
+ Free Shipping
Sold by: Book Depository US
Have one to sell?
Sell on Amazon 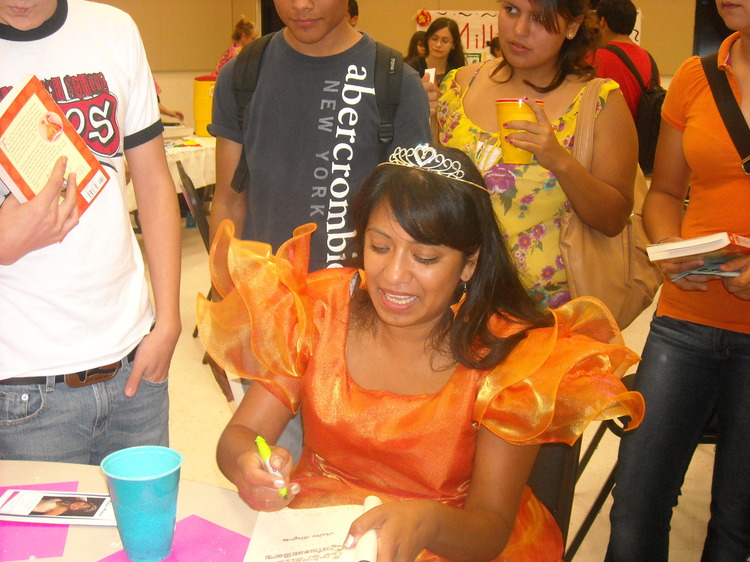 Sofi Mendoza's Guide to Getting Lost in Mexico Paperback – July 29, 2008

"Bird Hugs" by Ged Adamson
Bernard isn’t like other birds. His wings are impossibly long, and try as he might, he just can’t seem to fly. He’s left wondering what his wings are good for… | Learn more
click to open popover

Malín Alegría is the author of Estrella's Quinceañera. She is an accomplished educator, dancer, and actress who has cowritten and performed in several stage plays. Ms. Alegría lives in San Francisco.

bunny3ars
4.0 out of 5 stars Book was just as expected!
Reviewed in the United States on August 21, 2012
Verified Purchase
It's great service and fast shipping! I felt like I definitely got my money's worth with this product! The pages were clean and the cover didn't look too bad either!
Read more
Helpful
Report abuse

A
4.0 out of 5 stars One of the best YA travel novels I've read. Sofi is a dynamic character for sure!
Reviewed in the United States on July 9, 2016
The YA "teenage girl goes on an international trip and learns about herself" novel is a rather overexposed subgenre in which books filled mediocre writing, vapid storylines, and flat protagonists often proliferate. Nothing could be further from the truth in the case of Sofi Mendoza's Guide To Getting Lost In Mexico by Malin Alegria, though you wouldn't know it from looking at the totally boring and generic cover.

Sofi Mendoza is a senior in high school growing up in California. Frustrated by her overprotective parents' strict (and often unreasonable) rules, she tells them she'll be at a friend's house for the weekend and heads south across the border into Mexico to party at the vacation home of her crush's parents with some friends. Caught between two cultures: the Mexican one everybody assumes she identifies with due to her background and appearance, and the American one she claims as her own, Sofi unwittingly embarks on a journey of self discovery. What started out as an unsupervised party weekend filled with beer and prospects of making out turns into a much more serious self-examination of her personal identity, values, culture, heritage, and lifestyle when Sofi attempts to re-enter the United States with her friends, only to discover that her green card is a fake.

Marooned in Mexico with an aunt, uncle, and cousins she has never met, Sofi is furious and heartbroken. With little in the way of material resources, she's forced to summon personal strength she didn't know she had while trying not to focus on missing the Senior Class Trip, Prom, Finals Week, and Graduation. But tempering those disappointments is the perspective of her newfound relatives, whose main concerns are staying safe and functioning without clean running water, constant electricity, phones, or any of the other conveniences and creature comforts Sofi has grown up taking for granted.

Alegria peppers the story of Sofi's adventure with many Spanish words and phrases, for which there is a glossary in the back. The natural rhythm of the manuscript pairs wonderfully with these cultural inclusions, which bring the setting of Mexico to life. My only complaint there is that footnotes with the translations would've been more user-friendly, or the glossary could've at least been placed at the front of the book (as with Aussie slang in Tomorrow, When The War Began), because I read the entire novel before discovering it.

If you enjoy YA travel novels, examinations of cultural identity, and huge amounts of character growth, Sofi Mendoza's Guide To Getting Lost In Mexico is for you.

TeensReadToo
5.0 out of 5 stars Courtesy of Teens Read Too
Reviewed in the United States on July 16, 2007
Sofi Mendoza's life was made when she and her best friends were invited to the hottest party of the year.

Just when Sofi thought everything was perfect, her overprotective parents say she can't go. But that doesn't stop her -- after she tells her parents a lie, she heads straight to the party.

After the party, Sofi and a group of her friends decide to make a quick trip to Tijuana and make it back before morning, but little do they know that everyone will return, except for Sofi!

The only thing stopping her is the green card she has. Well, the counterfeit one. While her parents do the necessary paperwork, Sofi ends up staying with her aunt and cousins. Spending her time working on their ranch, living in their house with no electricity, Sofi finds a new love. By the time she falls head over heels, her paperwork gets completed and Sofi is on her way home.

But will the romance continue? Will she learn what life is really all about, and will she finally understand why her parents care so much?

You'll have to find out the answers yourself when you read SOFI MENDOZA'S GUIDE TO GETTING LOST IN MEXICO!

Biblioloca
5.0 out of 5 stars Thoughtful yet fun look at multiculturalism
Reviewed in the United States on April 18, 2008
This book starts off pretty mindless, with a spoiled girl who wants to go to a party in Mexico because the guy she likes is going. Once she tries to get back in the U.S., however, she finds out that her parents did not enter legally & she can't get back to the life she knew. Inspired by a true story, the book examines border issues and immigration from a highly personal viewpoint. Sofi is forced to become a tougher person in Mexico and you will like her all the better for it. Very realistic--great romance as well as eye-opening in terms of culture. Highly recommend!
Read more
5 people found this helpful
Helpful
Report abuse

Penny Thoughtful
5.0 out of 5 stars Deeply touching
Reviewed in the United States on September 28, 2012
I will forgive the somewhat cliched plot twists and stilted dialogue, because this book was overall one of the most deeply touching books I have ever read. It's got love, suspense, romance, family drama, everything you want! Sofi starts out as an infuriatingly clueless teenager and gradually figures out her place in the world as she gains new experiences. Having grown up on the Mexican border myself, I highly recommend it to everyone.
Read more
One person found this helpful
Helpful
Report abuse

Tracy E. Adams
4.0 out of 5 stars Independent Reading Book Review
Reviewed in the United States on May 31, 2011
I greatly enjoyed reading this book. It was very interesting to observe how Sofi gradually began to change over time and respond to the environment around her in new ways. This book had a good moral at the ending which clearly demonstrated the importance of the saying "things are not always as bad as they seem". All in all, I would definitely recommend Sofi Mendoza's Guide to Getting Lost in Mexico to a friend.
Haili Adams
Read more
3 people found this helpful
Helpful
Report abuse

jreader1505
5.0 out of 5 stars Great YA Read
Reviewed in the United States on June 5, 2007
Being a publishing and education professional, I can't say enough about SOFI MENDOZA'S GUIDE TO GETTING LOST IN MEXICO. Alegria's voice is very real as well as engaging. Her description of Mexico truly brought me back to the moment I first stepped into the country--the sights, smells, attitudes...Also, the problems and hurdles that Sofi must overcome are not exaggerated nor simple. Again, Alegria's voice is real, and Sofi deals with real emotions and real problems. I couldn't be more impressed. Alegria captures the struggle for identity and independence of every emerging adult--with a Latino spin. Can't wait to buy Estrella's Quinceañera!
Read more
6 people found this helpful
Helpful
Report abuse
See all reviews
Pages with related products. See and discover other items: new mexico's animals