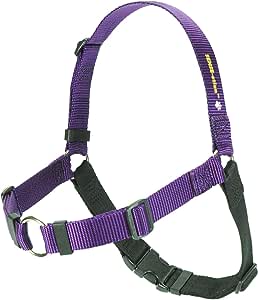 Brand: Softouch
4.3 out of 5 stars 461 ratings
Amazon's Choice recommends highly rated and well-priced products.
Amazon's Choice for "senseation dog harness"
Available at a lower price from other sellers that may not offer free Prime shipping.

The Dog Walking Harness available in purple is a great way to walk or train your dog. When using a normal collar or harness your dog feels as though they are being held back causing them to pull against the pressure. However with this no pull walking harness the pressure your dog feels is on their shoulder blades almost as if they are being pushed so they back up to fight the pressure. As a result you have a dog that walks calmly next to you rather than a dog that pulls and drags you when walked. Dog Walking Harness Features Available in purple also available in green as well; Softtouch SENSE ation No Pull Dog Harness Green . Available in two sizes Large and Medium/Large. To view how to size your dog for their harness check out our Softouch Dog Harness Information page with sizing graphs videos and other information. Harness design with front leash attachment at dogs chest keep dogs from pulling you while walking. Does not pinch and provides your dog with a full range of m

We DO NOT recommend leaving a harness on puppies and or adult dogs at first. It is easy for puppies to use the chest strap as a chew toy. For adult dogs, the harnesses can be left on if they are fit correctly. If the chest (front) strap is adjusted too tight, dogs will feel pressure from the strap when they sit or lie down. This is why the chest strap is designed to be on the loose side to keep dogs comfortable; otherwise they will try to remove the strap by chewing.

4.3 out of 5 stars
4.3 out of 5
461 global ratings
How are ratings calculated?
To calculate the overall star rating and percentage breakdown by star, we don’t use a simple average. Instead, our system considers things like how recent a review is and if the reviewer bought the item on Amazon. It also analyzes reviews to verify trustworthiness.

Rob D
5.0 out of 5 stars Buy This Harness Now. It Turned My Honking Choking Pulling Dog Into a Walking Angel, Instantly
Reviewed in the United States on May 3, 2016
Color: PurpleSize: Medium/Large WideVerified Purchase
Let's just say I am motivated to write my first ever Amazon review by this amazing harness.

My dog, Muppet, is a golden doodle who loves walks. Except, not really walks, she loves attaching a leash to your wrist and then taking off in a random direction of her choice like she's racing in the Iditarod as you get flung around the sidewalk like a two pound sled. When my wife tries to walk this dog, she ends up with bruises all over her arms that make her look like she was in a boxing match. It became such a chore just trying to keep my dog from killing herself and everyone else during an afternoon "stroll".

We tried lots of things, too. Obedience school was a good place for her to show off her people pulling skills to the other dogs and disrupt the entire class. We tried all the tips, followed their instructions, trained her at home, and basically flunked the class. Pinch and training collars were good for her to suffocate herself to the point she would honk like a donkey, louder than any bark she's ever had - but she must have enjoyed that noise because that made her pull harder. Typically, when she would encounter a stranger, she would pull and pull and honk so loud trying to get over to them to pet her that they would be terrified at this furry honking creature and quickly walk the other way. Embarassing. I had informally changed her name to Donkey. As for harnesses, my dog thinks that they are mainly designed to optimize her pulling and make it easier to pull the human along, and this did nothing to stop or decrease her "honking", which I desperately was trying to stop.

My wife and I were at our wit's end when she started reading about "tracheal collapse" and had a mental breakdown the other night. Personally I had come to terms with having a sweet dog who otherwise turned into a raging bull anytime she went on a walk. I figure we are going to have to pay for a dog trainer and who knows what else to try and fix this problem. I buy this collar at 10 PM and figure it's worth a try. A dog trainer friend of ours gives us some tips and says, "Yeah, it'll probably work, but it'll take months, you'll have to stop every 2 feet, make her come back to you, etc..."

We took it out for a test drive tonight. I left the tag on it in case it made no difference or was even worse. I was fully expecting not to make it to the street corner, and I could not believe that we walked a full mile with basically ZERO pulling. This was the best walk, I kid you not, we have had in the last year and a half with my dog. No honking. No choking herself chasing after other dogs! No tearing my rotator cuff! NO MORE DONKEY!!! I honestly would not believe that it worked like this if I had not seen it with my own eyes. Your mileage may vary depending on your particular dog, but this has been revolutionary for us.

This is a well-constructed, high quality harness, it WORKS, and knowing what I know now, I gladly would have paid a hundred bucks for it. If you're even thinking about buying this, stop reading reviews and buy it.

Uwapu
1.0 out of 5 stars Bad design, hinders dog’s shoulders/arms area. Avoid.
Reviewed in the United States on April 22, 2019
Color: PurpleSize: Medium/Large WideVerified Purchase
I thought the price and quality of this harness was great. I had used this harness for a couple of years as this was the harness recommended by the humane society in my hometown. Sadly, I realized too late that these harnesses are actually harmful for the dog due to their bad design. And this is proven by science - see Dr. Zink's study on this front-clip harness - Dr. Zink's study proved that dogs' gaits were permanently altered by wearing these harnesses, leading to orthopedic problems down the line.

They restrict a dog's full shoulder and arm movement, because the chest straps go squarely across the shoulders/arms area instead of up and over like a necklace. And this is not because I didn't fit it right on my dog. Take a look at any photo of a dog wearing this harness, correctly placed as shown by the company's photos. The chest straps cut straight across the shoulders/arms, instead of OVER the shoulders. This design is especially awful for dogs that have shoulder or arm problems like arthritis. The pull on this shoulder area is terrible.

I feel really bad that I put my dog through wearing this harness. I recommend that you find a better designed harness. For comparison of what an "up and over" the shoulders harness should look like, take a look at Blue-9's Balance harness or Ruffwear's Front Range harness which does not restrict the dog's shoulders and arms at all.
Read more

Amazon Customer
4.0 out of 5 stars This is the only harness my dog can't escape from
Reviewed in the United States on December 13, 2016
Color: PurpleSize: Medium/Large WideVerified Purchase
I have a 50lb escape artist dog who will back out of any collar or harness - except this one. I know this harness is designed to reduce leash pulling, but I bought it because if I clip the leash onto the front of her she won't be able to get the leverage she needs to escape the harness. She's a pit bull, so she's small and thin around the waist with a giant neck and chest, so I really like all of the different points of adjustment on this harness. The first one I received was a loaner that my dog chewed up, but I was pleased to see that they come in pretty purple when I came her to order another one! The Medium/Large size fits my chunky pit bull very well, and we're pleased with the harness. The only gripe have is that depending on your adjustment, the buckles could end up right in your dog's armpit! So just be mindful when taking long walks or pulling on the leash that your pup isn't chafing.
Read more

amy tran
5.0 out of 5 stars ITS AMAZING!
Reviewed in the United States on June 3, 2017
Color: PurpleSize: Medium/Large WideVerified Purchase
THIS IS THE MOST AMAZING THING I HAVE EVER PURCHASED.

I have a 75 lb german shepherd/lab that pulls my arm out of its socket every time I try to walk her. I've actually been avoiding walks and just taking her to the dog park because I just couldn't handle her on walks. BUT NO MORE! As soon as we put on this harness, she can't pull anymore! We still run across others dogs or squirrels on walks and she still tries to bolt, but the harness redirects her sideways and she ends up stopping herself WITHOUT PULLING ME. I cried happy tears. We walk every day now!
Read more
11 people found this helpful
Helpful
Comment Report abuse
See all reviews

Page 1 of 1 Start overPage 1 of 1
This shopping feature will continue to load items when the Enter key is pressed. In order to navigate out of this carousel please use your heading shortcut key to navigate to the next or previous heading.
Back
Next
Pages with related products. See and discover other items: no choke dog harnesses, Best no pull harnesses for dogs