Software by the Kilo and millions of other books are available for Amazon Kindle. Learn more 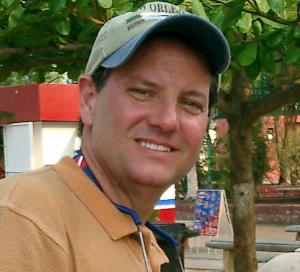 "In Software by the Kilo, Larry Ketchersid writes about romance like a romantic, about computers like a geek, about the Mafia like a Don, about war like he's been there. Perhaps, best of all, he writes about ordinary people as though he were one."--Robert Flynn, author of Echoes of Glory and Wanderer Springs

Start reading Software by the Kilo on your Kindle in under a minute.

Ramzi M Khoury
5.0 out of 5 stars A fun read and as with all SCI FI you learn something new
Reviewed in the United States on September 17, 2012
Verified Purchase
Shifting back and forth between two parallel stories, one during World War II Europe and one in modern day Europe and Texas the author takes you on a journey as seen from the entrepreneur's perspective. The older story is a history of World War II in Africa and Italy and leads to the development of the characters and in the long run their grandchildren. But it is also the history of a "family" business a-la-Mafia and the development of that business by three friends. The second story is the development of a modern day high tech startup which crosses paths with the descendants of the first story. Throw in a little romance, a little Interpol, a little Homeland Security and you get a full and very entertaining novel, and a happy ending to boot.
Read more
One person found this helpful
Helpful
Report abuse

John A. Weil
5.0 out of 5 stars Another Great Combination
Reviewed in the United States on August 13, 2013
Verified Purchase
I greatly enjoyed the author's first novel, Dusk Before Dawn, about seemingly unrelated subjects of martial arts, nanotechnology and mankind's destruction of the earth. In Software by the Kilo the author pulls it off again! This book combines stories about history, war, organized crime and modern day technology. The characters are interesting, the settings real and the action non-stop. I have studied military history and did not know about the events presented in this novel. I can honestly say this book is one of the best war stories I've seen in a long time.
Read more
One person found this helpful
Helpful
Report abuse

TM
5.0 out of 5 stars Software by the kilo 5 stars
Reviewed in the United States on November 13, 2013
Verified Purchase
Big fan of author Larry Ketchersid and the book Software by the Kilo. Fun read, always interesting. I recommend it.
Read more
One person found this helpful
Helpful
Report abuse

John F. O'BRIEN
5.0 out of 5 stars Software by the Kilo
Reviewed in the United States on January 11, 2010
Verified Purchase
Wonderful new novel by this author. His knowledge and understanding of the material make for a very interesting read. The tie in of WW-II and present day history of Italy is extremely well done. The interaction between computer Geeks and the Mafia is both humorous and a bit frightening. I expect more of this genre from the author. The sooner the better.
Read more
3 people found this helpful
Helpful
Report abuse

CK Webb
4.0 out of 5 stars Very clever!!
Reviewed in the United States on July 24, 2011
Software By The Kilo was written by Larry Ketchersid and published on December 1, 2009 by JoSara Media.
So you have an astonishing piece of software that you've developed. but no funds to market your product or investors to back you. What do you do? If you are Jason and Kenny, the main characters in Software By The Kilo, you get Italian drug smuggler Roberto Campioni as your primary investor of course! As Jason and Kenny become more and more entangled with Campioni, a few things become crystal clear; 1) The guys may have made the biggest mistake of their lives and 2) The Feds and Interpol are hot on their trail.
I heartily enjoyed Software By The Kilo, with it's well thought out and original storyline. The interaction between the techies and the goons was hysterical and a little creepy. Larry Ketchersid also did something I adore in a book... he wove fiction in with historical facts which gave the story that 'extra something' I am always looking for. I am not a software geek and get lost in the technical wording and language, but Larry found a way to get me through Software By The Kilo unscathed and even feeling a little bit smarter than when I began reading.
I am giving Software By The Kilo a 4-star rating and recommending this book to anyone looking for a fresh voice in the literary world. Invest in this book but...please, keep away from the Italian drug Lords.
WebbWeaver Reviews
Read more
One person found this helpful
Helpful
Report abuse

B. Showell
3.0 out of 5 stars Amusing read
Reviewed in the United States on March 27, 2010
Computer geeks, business people, hackers, beautiful women, family drama, murder, kidnapping, the mob and cops.
Only in a book could all of these paths be possible and cross one another. Jason and Kenny are the computer geeks. They've had a one-hit wonder in the computer world but need to keep the momentum (and money) going by coming up with "the next big thing". Kenny is ok with the one hit and would rather continue taking advantage of his incredible luck landing a beautiful girlfriend. Jason's mind is always in the money. He's busy searching for someone to fund their new product.
Through circumstances, he hooks up with a mobster - well-dressed, of course, who is looking to diversify. The mobster already employs one of the best hackers in the business - but what's his real agenda? Also, things aren't so rosy in the crime family. Who is for or against them?
If this wasn't enough, the mobsters are being watched and so are Jason and Kenny. It seems Interpol's on the case, as are some US cops. It's obvious why the mobsters are being watched, but who's watching Jason and Kenny and why? Are they in danger? Is someone after them? Will they notice in time? Oh and that hot new girlfriend? She's undercover. Ready to catch them at whatever they're being watched for. One problem - she's actually falling for Kenny.
This book had the most insane collection of characters and situations. But hey, that's ok - it's fiction! I really enjoyed the underlying plot of the book. Everything is not what it seems. This book had it all. Who's in love? Who's bad? Who's good? Who hates? Who's the criminal? Maybe bad guys aren't so bad after all. Or maybe they are. Who killed? Who will be killed? What's justified and what's not?
I laughed through this book but was also touched. The author made these people in the book real with real feelings and real involvement in life. It's kind of a drama-comedy all wrapped up in a book. I wasn't sure I was going to like this book, but all in all, I enjoyed the slapstick quality of it.
Read more
One person found this helpful
Helpful
Report abuse

Steve Wales
4.0 out of 5 stars A great read
Reviewed in the United States on December 27, 2010
This was great fun to read, combining present-day hacking, technology startups and criminal investigations with the past stories from World War II of the families of the investors and the investigators. The two time periods are intertwined, with disagreements in the present linked to long-running family feuds.

I enjoyed the Mediterranean locations (especially reading about them during the coldest December on record here!) and learnt plenty of little-known information about World War II, especially the Italians fighting on both sides, that was woven into the story. With so many characters with so many different agendas, and with so many different ideas, settings and so on it might have been difficult to keep track of everything, but the characters were well drawn and the concepts and historical information were woven into the story, keeping it all flowing. I really enjoyed this and I'm looking forward to reading more from Larry.
[...]
Read more
One person found this helpful
Helpful
Report abuse
See all reviews
Back to top
Get to Know Us
Make Money with Us
Amazon Payment Products
Let Us Help You
EnglishChoose a language for shopping. United StatesChoose a country/region for shopping.
© 1996-2021, Amazon.com, Inc. or its affiliates