You've subscribed to A Spice Shop Mystery! We will preorder your items within 24 hours of when they become available. When new books are released, we'll charge your default payment method for the lowest price available during the pre-order period.
Update your device or payment method, cancel individual pre-orders or your subscription at
Your Memberships & Subscriptions
There was an error. We were unable to process your subscription due to an error. Please refresh and try again. 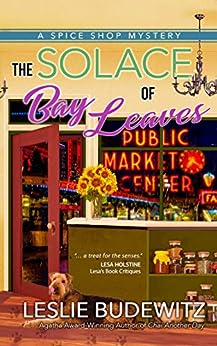 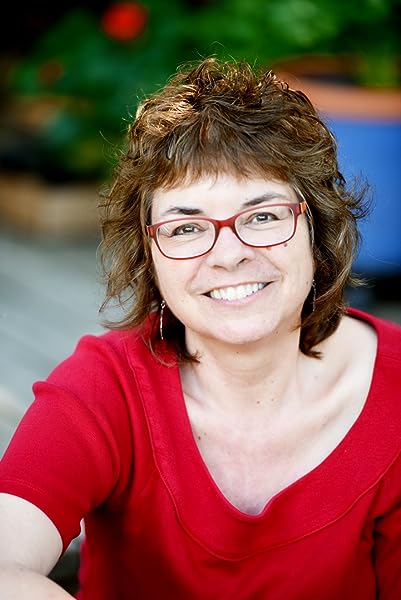 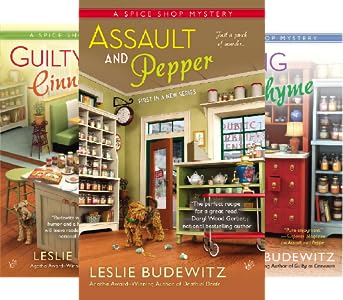 Leslie Budewitz blends her passion for food, great mysteries, and the Northwest in two cozy mystery series, the Spice Shop Mysteries, set in Seattle’s Pike Place Market, and the Food Lovers’ Village Mysteries, set in NW Montana. Leslie is the winner of three Agatha Awards—2013 Best First Novel for DEATH AL DENTE, the first Food Lovers' Village mystery; 2011 Best Nonfiction, and 2018 Best Short Story, for “All God’s Sparrows,” her first historical fiction.  Her work has also won or been nominated for Derringer, Anthony, and Macavity awards. A past president of Sisters in Crime and a current board member of Mystery Writers of America, she lives and cooks in NW Montana.

4.6 out of 5 stars
4.6 out of 5
105 global ratings
How are ratings calculated?
To calculate the overall star rating and percentage breakdown by star, we don’t use a simple average. Instead, our system considers things like how recent a review is and if the reviewer bought the item on Amazon. It also analyzes reviews to verify trustworthiness.

Kindle Customer
5.0 out of 5 stars Oh no!!!
Reviewed in the United States on July 25, 2020
Verified Purchase
I finished the book way too fast. For whatever reason Seattle Spice Shop owner Pepper, her people (and Arf) just make me so happy. I look forward to new books in this series for so long and then read it so fast it over way to soon. This is a murder mystery complete with creepy villain. But it's so nicely written with love, hope, heartache and a feisty main character. The story builds nicely to its conclusion with you know who in the middle as usual. Peppers relationship with the rest of the cast of players plays out with genuine love and humor. And all of the characters have well rounded personalities which is sometimes very lacking in fiction. I highly recommend this whole series.
⭐⭐⭐⭐⭐

Rachel
5.0 out of 5 stars Great Story
Reviewed in the United States on August 18, 2020
Verified Purchase
The saga continues in this installment of The Spice Shop mysteries. Pepper and company continue to show us the power of food, love and friendship. It leaves you guessing until the end. Love the recipes and makes me want to use more spice.
Read more
4 people found this helpful
Helpful
Report abuse

Lois Fisher
1.0 out of 5 stars Tedious. Couldn't Finish It.
Reviewed in the United States on April 18, 2021
Verified Purchase
I was impressed that Ms. Budewitz had won the coveted Agatha award for another novel. So I was shocked to pick up such a tedious and boring mystery. The author spent most of the time telling the reader endless "tidbits" about Seattle's geography, plus historical nonsense that all overshadowed the actual story. Two seemingly connected shootings -- one murder, the other attempted. But the dimwitted heroine never seemed to make headway in anything. The supporting characters were equally dull.
I thought I'd be immersed in the spice shop business. Alas, was not to be. I expected a cozy and received a book that dragged on more than my awful high school textbooks did.
Not recommended unless you want to tour Seattle.

Deborah M Almada
5.0 out of 5 stars Another complex and intriguing mystery
Reviewed in the United States on October 29, 2020
Verified Purchase
Another excellent book in a really good series. Pepper can't help but get involved when an old friend is shot on the grounds of her new project, with the same gun that killed her friend Laurel's husband. What is the connection? Is the same person involved in both shootings? This is a complex and interesting mystery involving a lot of people we have come to know. Love all the spice talk as well as all the food talk! More please!!!
Read more
One person found this helpful
Helpful
Report abuse

PatMGhan
5.0 out of 5 stars Another Great Spice Girl Mystery
Reviewed in the United States on May 6, 2021
Verified Purchase
I love this series. For my favorite series, like this one, I save the most recent releases for a day or week where I just want an escape into something yummy, fun, absorbing, and familiar. And, once again, Leslie's spice series did the trick. I loved catching up with Pepper and being back in the spice shop and in the Seattle Market. The mystery plot was absorbing and a good puzzle and I liked that the earlier murder was linked in and solved. So glad to have had a virtual Seattle vacation climbing the hills and following Pepper on her trail. Very enjoyable .
Read more
Helpful
Report abuse

Marianne
5.0 out of 5 stars Grateful for the Solace of the Books of Leslie Budewitz
Reviewed in the United States on November 11, 2020
Verified Purchase
I have read and deeply enjoyed all of the books in this series of a most thoughtful, engaging, creative, compelling, and imaginative author.
Read more
2 people found this helpful
Helpful
Report abuse

James A. West
5.0 out of 5 stars Another creditable entry in this series
Reviewed in the United States on December 1, 2020
Verified Purchase
Leslie Budewitz continues to delight with her Pike Market Spice Shop series. Pepper Reese and her extended family of Seattle marketeers are rapidly becoming old friends you love to visit again and again. I highly recommend this series from book 1 to book 6.
Read more
One person found this helpful
Helpful
Report abuse

Linda Kleback
5.0 out of 5 stars First Rate Mystery
Reviewed in the United States on November 14, 2020
Verified Purchase
I loved this book because of its great characters, a good mystery and the fascinating information on spices. Eagerly looking forward to more books in this series.
Read more
One person found this helpful
Helpful
Report abuse
See all reviews