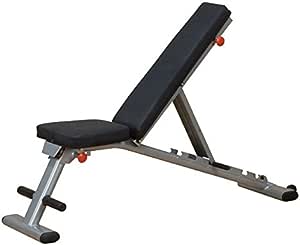 The Body-Solid Gdfid225 multi-bench is the perfect training partner - functional, compact, portable and durable. It requires no Assembly and is designed to be used straight out of the box. Features include seven adjustment positions for flexibility and comfort. The 2" x 3" oval tubing ensures durability and support for the heaviest of workouts. Built-in wheels make transport quick and easy and it folds flat for storage under a bed or on end in a closet. In-home lifetime warranty.

Cons:
- The only real con I have so far is that the bottom seat pad is stationary, i.e. it does not tilt up when doing incline presses. Therefore, as other reviewers have mentioned, there is a space created between your lower back and the pad. I guess it can be addressed by putting a towel or something at the small of your back during incline work. Not a deal-breaker for me because of all the other great features, but this is why I rated it 4 out of 5 stars.

Overall, a very good bench at a decent price for what my needs are.

Caveat Emptor
4.0 out of 5 stars Pricey but far superior to other bench I ordered and returned
November 2, 2019
Verified Purchase
I was looking for something easy to use and store, and of course sturdy. I always start by reading the negative reviews first. If mine arrived with the construction issues reported by the relatively low one star reviews, I'd be peeved too. Fortunately, mine arrived with no such QC flaws.

It arrived fully assembled, always a big plus. If I have a complaint about out of the box experience was the plastic bag protection on the seat padding. Both seat sections are attached with the plastic already on. That means you have to either undo screws to slip of plastic cover, or just rip it off and not obsess over a tad bit of plastic remaining underneath the cushions. Not such a bad thing as the plastic protection is guaranteed not to come off in shipping.

The item is pricey, but so far I think the price is not horrible compared to other offerings I tried. This item, or at least the one I received, is far more rock solid and sturdy than what my 220 frame plus about a hundred and fifty pounds of dumb bell weights need. It's easy to adjust the back rest angle. The back support bar is robust with little to no lateral sway, and is as easy as it gets to adjust. There is no movement/sag/sway/rattle of any parts that aren't supposed to move at any seat angle and with maximum weight I use (and probably much more, I ain't tryin' to get all swole at 55).

One of my requirements for a bench was that it be light and portable enough to easily put away in my home office closet (home office doubles as exercise area). It is super simple to "collapse" for storage, if you can really call it that. All you do is pull a handle to fold the front legs under, and it's ready for storage. This thing is not exactly light, but the wheels all but negate that issue. It doesn't fold in half like some benches do, but I've learned that's a good thing. That means it is rather tall when stored upright, but that's not a problem for me in the closet where I will be storing it when not in use. Although it doesn't fold in half for storage, it folds flat, which I find preferable.

I took a star off because the seat is fixed (would be better with an angle or two adjustment stops) and because the gap between seat and back land right where your butt is gonna go for most of the exercises you'll do on this thing. Having said that, In my experience that seat/back gap is the standard trade-off/compromise for all the other adjustable FID benches I've previously owned (maybe three in total over my life). The gap is not terribly uncomfortable, certainly not painful, but it's something to be aware of that you'll have to grow accustomed to.
Or, you just tuck a rolled up towel in the gap.

I've only just unboxed this thing and used it in a brief trial work out or two, but in that brief experience I'm pleased with this unit. Body Solid has a lesser priced version (by about half) that looks to be lighter weight and probably perfect for ladies or dudes leaner than I, but I believe the extra solidity of this unit is worth the price. I think the wheels are preferable for moving around than would be the lighter weight version sans wheels. Time will tell if it's durable in the long run, but so far I can't see any weak points I can readily identify as future problem areas after prolonged, regular use. I guess the only point of future failure I can see would be the seat cushions and stitching as the weakest point on any work out bench by default, but at present I see no QC or construction issues with the seat-back framing, padding, stitching, vinyl material that leads me to believe premature failure of these areas due to regular use will be a concern, but that's one of those things only time will tell.

Erik C.
5.0 out of 5 stars Best design I could find for a folding bench, build quality seems excellent.
May 5, 2016
Verified Purchase
My bench was delivered last night, and I used it for the first time today. I will admit that I have never been a gym rat, so my review might miss things that a hard core lifter might notice.

Let me say that I am impressed with the build quality. Solid welded construction, pad material seems thick and well stitched. It was packed with a fair amount of styrofoam and a everything was protected by cellophane, so I couldn't find a scratch or dent anywhere. And I looked.

The material is like a leathery rubbery material, a little different but nice because it has a kind of tacky texture so I don't slide around. Not sure how it will hold up long-term, but it does seems nice and thick, previous reviewers experienced excellent warranty response in the event it eventually tears.

The bench came fully assembled, but it took a few minutes to tear off all the cellophane. It unfolds and folds easily, probably doable with one hand.

Let me address the five major concerns people have:
1. Gap between the seat and backrest- I don't see any way you could build a folding AND adjustable bench without the gap. I haven't found a bench that doesn't have this issue, and so far it hasn't bothered me.
2. Zipper rubbing leg- That must be an older model, because there is no zipper on the seat or anywhere else for that matter. The end of the seat is completely smooth.
3. Defects- mine appears to be defect free.
4. Flat seat- I was looking at another bench that had a tilted up seat. The problem with that bench was the seat could not go flat, so when attempting to do any flat lifts, you would only have the length of the backrest to use, and tall people would have their head hanging off the end. My head was almost hanging off the other bench. I figure when you want a folding, adjustable bench you can't have everything, and this worked best for me. I feel that the tackiness of the material and the ability to put my feet up on the pegs made it perfectly comfortable to do incline work.
5. Foot pegs not padded- the foot pegs are wrapped in thin rubber. It would be nice if it was a little thicker, but I prefer it to the giants pads that always roll around and make it hard to hook your feet.
Read more
8 people found this helpful
Helpful
Comment Report abuse

KcKerry
5.0 out of 5 stars Awesome tough bench.
February 9, 2018
Verified Purchase
Awesome bench. Delivered fast.. simple setup. Nothing to do but pull off plastic. I use mostly with dumbbells but has other uses. So easy to adjust. Great padding. At various levels of incline I put pool noodles under my back for added stretches. At fullest incline you can just lay back and get some great back stretch relief. When adjusting so head is below hips, I put my feet on top of footrest not under. This keeps from over stretching back.
Great situp bench also. Thought a little pricey until I got it and used it. This thing is made for guns to handle big guys and abuse. To use for home likely last forever.
Read more
3 people found this helpful
Helpful
Comment Report abuse
There are 145 customer reviews and 146 customer ratings.
See all 145 customer reviews
Write a customer review

Page 1 of 1 Start overPage 1 of 1
This shopping feature will continue to load items when the Enter key is pressed. In order to navigate out of this carousel please use your heading shortcut key to navigate to the next or previous heading.
Back
Next
Pages with related products. See and discover other items: incline bench, exercise weight, barbell bench, sports benches, Best Rated in Strength Training Adjustable Benches, gym barbell equipment