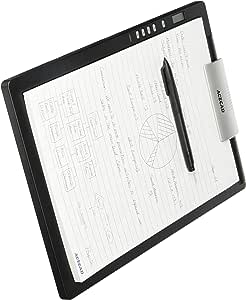 Brand: SolidTek
3.8 out of 5 stars 131 ratings
| 57 answered questions
Currently unavailable.
We don't know when or if this item will be back in stock.

The SolidTek DM-L2 DigiMemo L2 8-1/2-by-11-Inch Digital Notepad is a stand-alone device that can digitally capture what you write and draw on regular paper--with no special paper or computer. The Digital Notepad remembers the strokes that you draw and when you are done, you simply plug the Notepad into your computer via USB and upload your notes. Then you will have both a digital and a paper copy. The included DigiMemo Manager software lets you easily view, edit, and organize your digital pages in Windows. The digital pages can be saved as BMP, JPG, GIF, or PNG formats. You can then easily share your digital pages with others, or highlight, annotate, and edit them.

When the pad is connected to a PC, it can function as a graphics tablet, with the writing on the paper and the writing on the screen synchronized. The DigiMemo L2 has a writing area of 8 by 11 inches and has 32 MB of built-in storage, with a CompactFlash memory card slot for expansion. The pad is light and thin, and isn't uncomfortable to hold or use. The battery of the pen can last about 14 months and the pad will last about 100 hours on four AAA alkaline batteries. The unit automatically shuts down after 30 idle minutes.

3.8 out of 5 stars
3.8 out of 5
131 global ratings
How are ratings calculated?
To calculate the overall star rating and percentage breakdown by star, we don’t use a simple average. Instead, our system considers things like how recent a review is and if the reviewer bought the item on Amazon. It also analyzes reviews to verify trustworthiness.
Top reviews

James E. Schaefer
3.0 out of 5 stars Company Never Followed-Up on Product Potential
Reviewed in the United States on May 31, 2015
Verified Purchase
This product had promise. The tablet does transfer what is written to a file on board the tablet with some measure of accuracy. After that, things go downhill:

1. The problems begin with trying to do something with the file. It uses some type of very old proprietary software that requires conversion. Keeping track of what is on the tablet's disk and what has been transferred to the computer is cumbersome. Why not an option to automatically link to something like Evernote? The link to OneNote has never worked for me and I have the latest version of that. This should have been fixed in software updates...however see problem #2.

2. No software updates. This product has been around at least since 2008 and I have not seen any updates or even any attempts at updates.. it seems like this company has just given up at any attempt at improving the product.

3. Product quality is not up to par. The pen is just plain bad. Cheap plastic with end and caps that just fall off..they don't even attach solidly. The pen costs in the same range as a good entry-level fountain pen...with only 25% of the quality of the average entry fountain pen. The tablet itself is not terrible, but the battery covers are cheap and will break after two or three changes of batteries.

This product had promise, why hasn't a competitor taken this concept and run with it??
Read more
14 people found this helpful
Helpful
Report abuse

BobG
4.0 out of 5 stars I was wary of digital pens which are a lot like writing with a horse's leg
Reviewed in the United States on September 29, 2014
Verified Purchase
When I left my last job, I had to go through a huge file cabinet full of documents from my 16 years with the company. Most of it was notes I took in meetings, and none of it was really searchable. I promised myself, "Never again!" and swore to maintain my notes in electronic form from here on.

So far I tried: (1) a tablet computer, (2) a portable scanner, and (3) now this digital notepad. The DigiMemo L2 wins hands down as the easiest and fastest solution. I maintain my notes in Microsoft OneNote, and this adds my hand written notes to notes from my tablet, scanner, and keyboard..

I found I couldn't write precisely enough on the tablet computer to really capture a full page of text, and realized I really prefer writing on paper, especially when I'm trying to focus on my client during a meeting. So I switched to the scanner, which works well, but it's a bit time consuming to scan all the pages. I was wary of digital pens which are a lot like writing with a horse's leg, and which require specially printed paper. This digital notepad seems to work really well, with a pen that is normal sized and on ordinary paper.

I LIKE:
- That I can take notes at any pace and fill the page and the DigiMemo L2 keeps up
- That when I add the pages to OneNote, they appear as handwriting (rather than images), which is fully searchable. The pen strokes are editable as if I entered them on a tablet computer. Also, it automatically fills in the date and time the note was taken - very helpful!
- That this device works with ordinary paper, and holds a standard tablet
- That the pen is normal sized and takes standard ink refills and batteries
- People think it's a clip board. It's very non-intrusive during meetings.
- Sync with the computer via USB or SD card

I WISH:
- The pen was more substantial;. It has a cap that looks easy to lose, and the back of the pen seems like it's going to fall off when I remove the cap from it. It's really a cheap junky thing, but it works. I sent for some real Cross refills hoping they will be nicer to write with.
- There was an option for merging multiple paper pages into one page in OneNote (there is a "Gem" add-in for OneNote that merges the pages after, and that's fine)
- The clip board could be a little lighter and thinner, but it's not bad.

Overall this is the best tool I've found for capturing paper notes on my computer. You have to tell it what page you're writing on using the buttons on the upper left face; it's very easy. I use a Lenovo W540 running Windows 8.11 (64-but) and OneNote 2013 (32-bit) and it all works flawlessly.

It would be great to see an updated version from SolidTek - this thing has been around for years! My wish list for the next version:
- Nicer pen (if you want to keep the price down, offer a nicer pen as an add-on. I'd gladly pay more for a real writing instrument that is nicer to hold, properly balanced, and smoother writing!)
- Wifi or Bluetooth sync
- Lighter weight and thinner clip board

If you've been on the fence about buying a digital pen or notepad, and if you like writing on paper - this is it. Go for it, it works!
Read more
9 people found this helpful
Helpful
Report abuse

Reviewer 66
5.0 out of 5 stars Bought This for My Father Who Works Out of His Truck
Reviewed in the United States on April 1, 2014
Verified Purchase
My Dad absolutely uses this pad all the time now. It is very useful for electronically storing his notes and keeping a paper backup as he doesn't trust electronic records all that well. It is a big advantage to be able to use any standard paper or pen with this product and still get great results!

Pro:
+ Works for 5+ years without an issue!
+ Works with any standard weight paper or ink pen!
+ Amazing accuracy of duplicating what's on paper
+ Very easy to upload notes to any computer (desktop, tablet) and even further modify them
+ Very sturdy writing surface

Con:
+ Could be a little bit lighter

If they could somehow make a foldable writing surface that was still very sturdy so that this could be taken on airplane trips more easily, that would be incredible!
Read more
9 people found this helpful
Helpful
Report abuse

Amazon Customer
5.0 out of 5 stars Excellent!
Reviewed in the United States on April 16, 2013
Verified Purchase
I've used it for a week. It works perfectly - great accuracy (especially compared to other products), integrates with 2010 OneNote, (and I'm hoping they add support for 2013 sometime soon). To the people who say it doesn't write through more than few pages - make sure you actually put the battery in the pen - it's obvious what to do with the tablet, but it's easy to assume that the pen doesn't need anything, when in fact you need a working battery in it, and the battery is separate from everything else wrapped in some plastic stuck to the foam that the tablet is shipping in. It's a standard watch battery, though.
Also, I didn't bother with the portfolio that they sell - instead I stopped by at OfficeMax and got myself a large portfolio, got rid of a binder from it, and I carry the tablet, pen, and spare paper in it instead. The benefit of that is that for the meetings I take the tablet out of the portfolio, so I don't have the giant portfolio take up half of the meeting table - it almost looks like just a writing pad.

Pros:
- great accuracy,
- regular paper,
- regular batteries (2xAAA for the tablet, plus a watch battery for the pen),
- the pen uses regular ink and the refills can be bought from several places,
- regular SD card to expand memory (not that you'll really need it if you use it with OneNote),
- integrates with OneNote 2010.

Cons:
- the SD card must be one of the older ones - they don't support more than 2GB, and you can't just partition a bigger one and format it down - it must be actually a 2GB SD card,
- doesn't integrate with OneNote 2013 at the moment yet (other than saving to PDF and importing as a print out).
Read more
7 people found this helpful
Helpful
Report abuse
See all reviews

Amazon Customer
2.0 out of 5 stars Durability
Reviewed in Canada on November 27, 2018
Verified Purchase
Only works about a year then stopped working
Read more
Report abuse

Stéphane Brissette
5.0 out of 5 stars Realy works well
Reviewed in Canada on March 23, 2013
Verified Purchase
I use it to fill form and import them into access save me alot of time and recon is prety good
Read more
Report abuse
See all reviews
Pages with related products. See and discover other items: tablet paper, electronic notepads